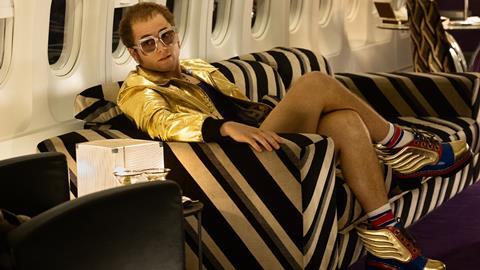 Coming so soon after the crowd-pleasing success of Freddie Mercury biopic Bohemian Rhapsody, the larger-than-life, rags-to-riches story of Elton John will garner inevitable but unfair comparisons.

“It’s a musical based on the life of Elton John and his rise to stardom with more of a nod to a film like The Greatest Showman than to Bohemian Rhapsody in terms of style,” stresses Chris Dickens (Slumdog Millionaire), the film’s editor.

“This is not a documentary. It has a heightened reality.”

Indeed, Paramount promotes the picture as ‘a true fantasy’ unlike the Queen story which was criticised for self-censoring some of the more rock n roll aspects of its subject’s lifestyle.

It shares with Bohemian Rhapsody a chequered and long gestating history which at various times over the past few years has had Tom Hardy and Justin Timberlake attached to star.

Taron Egerton (who ironically appeared with Elton John in Kingsman: The Golden Circle) was ultimately cast as John in July 2017 and Dexter Fletcher signed on to direct in April 2018, after finishing the final month of filming Bohemian Rhapsody after original director Bryan Singer was fired. Principal photography began last August largely at Maidenhead’s Bray Studios.

“We had this idea of Elton walking on a sea of people’s hands onto the stage but it didn’t feel fantastical enough.” Chris Dickens, editor

Fletcher had previously demonstrated a lightness of touch with 2013’s Sunshine On Leith, based on music from The Proclaimers. Dickens was no stranger to musicals either, having cut Tom Hooper’s award laden feature adaptation of Les Misérables.

“In Les Misérables the music told the story all the way through, like an opera,” Dickens explains. “It’s very hard to pull that off because you need the musical numbers to play out at length. Rocketman was different in that the script contained two stylistic approaches to the story which had to resolve in editorial. With Rocketman, we are using Elton’s music to tell the story but we’re also telling the story between those numbers. You need to find the balance between them. Too much music, for example, can be very claustrophobic.

Find out more about the story of the music and the edit of Rocketman in the Big Screen sessions at IBC2019.

The screenplay by Lee Hall, who wrote Billy Elliot and also the script for Tom Hooper’s upcoming feature adaptation of the musical Cats, is produced by Matthew Vaughn (Lock, Stock and Two Smoking Barrels, Stardust, Kingsmen: The Secret Service). It follows the pop icon’s early years as a working class north London lad, then as a prodigy at the Royal Academy of Music, up to his eventual musical partnership with songwriter Bernie Taupin, and his preparations to release Honky Chateau, his 1972 breakthrough album.

There’s another clear difference to Bohemian Rhapsody too in that the subject of the film is not only very much alive, he is also one of its executive producers. Indeed, John is currently in the midst of his 300-date Farewell Yellow Brick Road tour and will retire from touring upon its conclusion in 2021.

“The lows were very low, but the highs were very high. That’s how I wanted the film to be.” Elton John

Dickens adds that David Furnish, John’s husband and also a producer on the project, was hands-on.

“They came to the set on a number of occasions and David certainly had his opinion on certain things but I can’t say they objected in any way to the creative license we were taking.” Indeed, they had wanted to make this film for many years which documents John’s career highs as well as his struggles with alcohol, substance abuse and identity.

“It’s not hard-nosed about it but we don’t shy away from the drug taking and excesses of being a rock star,” Dickens says. “Tonally, it reminds me of [Johnny Cash biopic] Walk The Line in having a darker undercurrent that gives you a sense of how Elton lived his life.”

John himself has said that authenticity was the most important aspect of the film for him. “It had to be as honest as possible,” he says. “The lows were very low, but the highs were very high. That’s how I wanted the film to be.”

In the same clip, Fletcher says “because of the nature of who Elton is, the storytelling allowed us to totally indulge in fantasy and imagination.”

The film deploys John’s playlist to comment on emotional beats and to drive the story forward. More than twenty tracks were re-recorded under supervision of music producer Giles Martin using Egerton’s own vocals, ranging from his first hit single ‘Your Song’ to ‘Goodbye Yellow Brick Road’ and ‘Rocket Man’, to lesser known numbers like ‘Take Me to the Pilot’ (the B side of ‘Your Song’) and ‘Hercules.’

One of the main editorial challenges was the film’s ending, scripted as a showstopper for the song ‘I’m Still Standing.’

“The original plan was to go to Cannes and Nice and reshoot the pop promo for the track directed in 1983 by Russell Mulcahy but the weather had worsened by the time the scene came round to filming last October,” Dickens explains. “An alternative idea was to shoot a whole stage performance of the song in front of a large crowd but they couldn’t get it to work.

“We even had this idea of Elton walking on a sea of people’s hands onto the stage but it all felt too realistic, or rather, not fantastical enough,” Dickens says. “Then Matthew Vaughn had the bright idea of trying to get hold of the original rushes for the pop video.

“Although that seems like such an obvious idea, it was far from it, but when we saw the rushes, it was just perfect. It looks like we actually went there.”