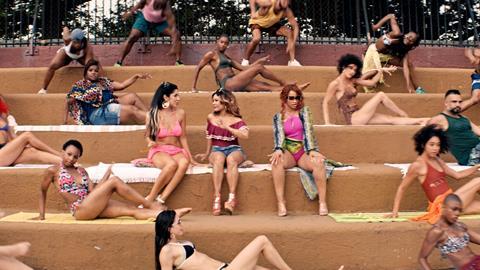 Behind the Scenes: In The Heights 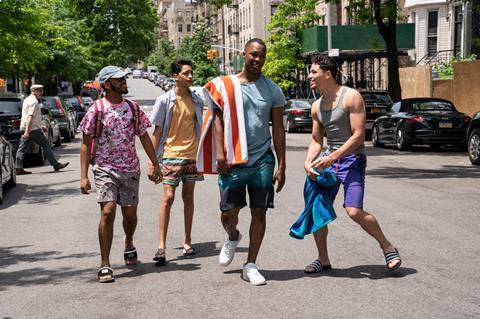 Lin-Manuel Miranda: Shoots a love story to the Washington Heights district he grew up in

“The streets are made of music,” declares grocery store owner Usnavi at the start of In The Heights, the new musical set among New York’s Latino community in a nod perhaps to The Sound of Music.

It’s a paean to the experience of Dominican, Cuban and Puerto Rican immigrants, but really it’s a love letter from impresario Lin-Manuel Miranda to the Washington Heights neighbourhood of NYC he grew up in and around, just as much as Manhattan (1979) is to Woody Allen.

Miranda wrote the music and lyrics into a Tony Award-winning Broadway show in 2007, a decade before the international smash of Hamilton. He produces this screen version and appears in cameo but hands the directing reigns to Jon M Chu who made the hugely successful comedy drama Crazy Rich Asians.

The Washington Heights district is in the uppermost west side of Manhattan where Broadway reaches past 160th Street and 20 blocks beyond. A cliché it may be, but in this movie the locale is not just a character but arguably the main character.

“That the streets are made of music is what differentiates our movie from other musicals,” says cinematographer Alice Brooks. “Our characters don’t suddenly break out into song and dance. Their story is grounded in the reality of a real place where they can express their hopes, dreams and fears not just through dance but through their environment. The characters can affect their environment and several numbers show their world visually shifting to where they are emotionally.”

“That the streets are made of music is what differentiates our movie from other musicals,” Alice Brooks, cinematographer

One of these has the camera tilt as if the characters are dancing on a vertical building. Another song, Champagne, is a romantic dance filmed in a narrow apartment block shot in one take (though it took 14 takes to get there). Paciencia y Fe is a fantasy sequence filmed in a subway tunnel and train; 9600, an extravagant Busby Berkeley-style number, is choreographed in a swimming pool. 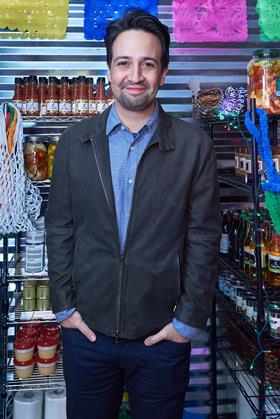 “This whole movie could have been built on stage but Jon, Lin and [screenwriter Quiara Alegría Hudes] were adamant they wanted to make this movie in Washington Heights,” says Brooks.

While large sections of principal photography were shot there, in truth a lot of the exterior scenes were filmed on the Warner Bros lot. This staging included a like-for-like mock-up of an entire intersection at 175th and Audubon which is the focal point of the film’s mix of bodegas (grocery stores), beauty salons and apartments.

“The biggest challenge and biggest reward was shooting on location,” Brooks says. “The community was so generous, the neighbourhood is so vibrant. During scouts I started hanging out there a lot and bringing my crew. One scout we did was the first very hot spring day [this is April 2019] and everyone was out in the street. I started taking pictures of people in the neighbourhood and that night I think was most inspirational to me in terms of thinking about how to make this film.”

Walking every street
She tasked production designer Nelson Coates (Crazy Rich Asians) with finding a location for the main bodega in a southwest corner of the intersection where the light would be best.

In preparation, Coates spent three days walking every street in the Heights as well as part of Harlem and the Bronx. “I looked in every single beauty salon, coffee shop and bar,” he explains. “What were the commonalities and what were the details that made a Puerto Rican salon a little different to a Dominican one, what makes the Heights different to the Bronx? By immersing myself in every bodega, taking copious pictures and notes, I was able to find specific elements to bring into the frame like planter boxes around trees, types of awning or window dressing or cakes.”

Bit by bit, Coates built up the world of the film centred on the intersection. Most of the businesses remained open during shooting even with facades in front of them. The exterior of the film’s bodega covers a real-life beauty salon with the owner still servicing clients inside. A computer store became a pharmacy. A bandstand is evocative of a building in Havana.

“Ironically that intersection had six different salons but none where we needed the salon to be. So I covered one with a Dominican bakery another with a hardware store another with a furniture store.”

He clad a lot of the buildings in façades, dressing two whole blocks in all directions with painting and signage. He also obtained permits from police, fire and city departments.

“We would only get certain hours a day. It doesn’t hurt that Lin and his father are so well connected in the community but we’re also displacing parking and covering business fronts. We had to get a lot of people excited about our project.”

Subways and swimming pools
Brooks worked with a large-format DXL camera from Panavision using anamorphic lenses to defocus New York’s backgrounds and maintain an intimacy to the story. Steven Spielberg’s West Side Story remake, delayed a year on release like In The Heights, was shooting just a few blocks away at the same time.

For the number 9600 about a fantasy lottery ticket win, Chu wanted to shoot at Highbridge Park pool, the first time this location has appeared on film. The public pools, fed by spring water, were erected on the site of a former reservoir supplying the city in 1936. A series of tunnels underneath originally to support aqueducts made the weight of a film crew on its deck an issue.

“We had specialist engineers assess the weight of the deck and therefore what crane we could use,” Brooks says. “We wanted to achieve height over the pool for shots so we could mimic Busby Berkeley-style screen choreography. Drones would have been ideal but NYC is a no-drone city. We explored cable-cams but ended up with a 45ft MovieBird. We had to shoot that scene with spherical lenses in order to get a wider angle view than the anamorphic. It was well worth it for sure.”

Brooks’ favourite number is when Abuela (the story’s matriarch) reminisces about her Cuban childhood and arriving into the city in the 1940s. They shot this in an abandoned subway station, used now only for maintenance, and below a working station in the Bronx.

“Shooting in New York’s subway post 9/11 is tricky, but the Metro Transit Authority were wonderful to work with,” she says. “We found this 900ft-long tunnel covered in beautiful commissioned graffiti art. The challenge was we had only between 5pm and 5am to light and shoot the scene.”

Scenes inside the key bodega location were filmed in a real neighbourhood apartment but one that needed a complete interior redesign.

Nelson Coates: “We found an ideal townhouse with great geography which meant that Usnavi could come out of the bodega and turn and see Washington Bridge,”

A carefully curated film
“We found an ideal townhouse with great geography which meant that Usnavi could come out of the bodega and turn and see Washington Bridge,” Coates says. “It created a cinematic connection to the neighbourhood, but the apartment interior was super modern with black floors and white cabinetry. Luckily the family living there let us use it [they moved out for the duration] and redecorate to fit our more down-at-heel aesthetic.”

Like a staged play, every element used on location had to be able to be reeled back on coasters or rearranged to fit new lighting, or simply to let the locals go about their business. It also had to be fit to dance on.

“For the dance Carnaval del Barrio set in the backyards of fire escaped buildings, we painted the backs of these buildings all stark white, we got rid of fences, created a flat dance floor over uneven concrete, cleared out shrubs, made a camera platform and ensured all the fire escapes were safe. Then we dressed all the windows. In the story it has to look as though it’s so hot the people brought their inside furniture out.”

“You want to make it look natural as if we didn’t do anything, yet it’s a very curated show,” Coates adds. “Everything is carefully crafted and controlled.”

A favourite piece of set dressing is a large map behind the counter of the bodega depicting the Dominican Republic. Coates explained that Chu wanted a map because he felt a lot people don’t know where the country is.

“You want to make it look natural as if we didn’t do anything, yet it’s a very curated show,” Nelson Coates, production designer

“It’s a challenge to tell that visually because the DR is not an island, it is half an island, shared with Haiti. I had the idea of making it out of elements that were sold in the Bodega. If you look closely, you will see the map is a mosaic of metro cards, candy turtles, canned goods, keys, packets of fish, bottle caps – even sand from the country’s actual beaches.”

He says: “Usnavi is going to jump over the counter and point to the map so we had to consider where it would appear in frame. It looks like a map you’ve never seen before and yet quickly tells the story of who this guy is and where his community is from.” 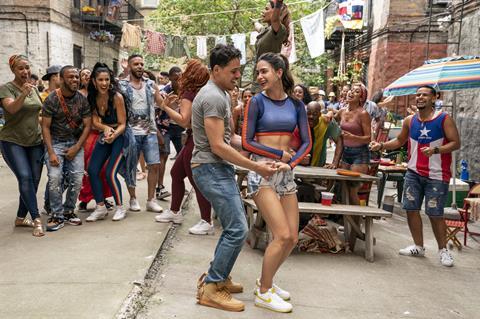 On location: Lin was adamant the majority of the movie should be filmed in Washington Heights for authenticity

From child actress to DP
The film business is in Brooks’ blood. Her mother, actress Candace Coulston, enthused her with a wealth of knowledge of Broadway shows, taking her to see Into the Woods aged seven.

“I grew up watching Fred Astaire and Ginger Rogers movies and then films like Meet me in St Louis, The Music Man and My Fair Lady,” she says.

Her father, Stephen Levi, was a published playwright who cast Brooks and her sister in some of his productions. Brooks herself was a child actor in some 40 national commercials, even appearing on the David Letterman show once a week and on Broadway in a tribute to musical star Mary Martin when she was eight.

“I grew up around the camera but at 15 I knew I no longer wanted to be an actor. I was totally attracted to lights and sets and we’d go to Paramount or Warners with dad and watch the camera people. I knew I wanted to be a DP. I did still photography at high school then applied to film school.”

She met director Chu at film school in California and bonded over a love of musicals.

“We even made a musical together called When the Kids are Away 19 years ago,” she says. “I never wanted to do anything else.”

They subsequently made dance-themed Jem and the Holograms, her first union feature, earning her entry into the International Cinematographers Guild.

As soon as she finished production on In The Heights, Brooks jumped straight into shooting Tick, Tick…. Boom a musical about an aspiring composer (played by Andrew Garfield) marking Miranda’s film directorial debut for release on Netflix later this year.