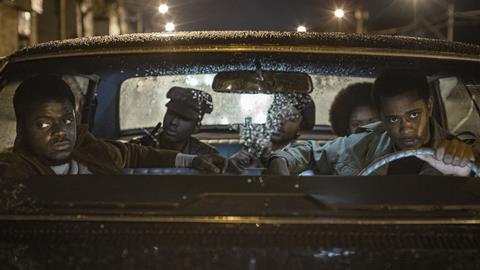 Behind the Scenes: Judas and the Black Messiah

Editor Kristan Sprague explains why they made multiple cuts of the story of Fred Hampton, the firebrand leader of the Black Panther Party who was killed in 1969. 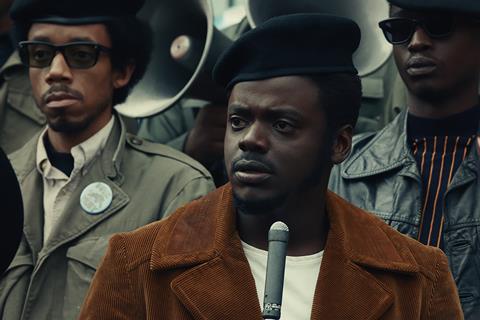 Several recent releases have tied the US civil rights struggle burning in the 1960s with the renewed urgency of today’s Black Lives Matter movement.

One Night in Miami prefigures the assassination of Malcolm X; Spike Lee’s Da 5 Bloods and Aaron Sorkin’s The Trial of the Chicago 7 are set in the aftermath of Martin Luther King’s assassination.

Now, Judas and The Black Messiah relives the potent history of Fred Hampton, a firebrand leader of the Black Panther Party who was killed by police during an FBI-led raid in 1969. He was a peripheral figure in The Trial of the Chicago 7.

These films will figure prominently in the race to win Academy Awards. Like Mangrove, Steve McQueen’s feature about harassment and injustice in ‘70s London, these stories have been criminally neglected on screen; if they were about white persecution, they would already have been filmed.

That’s particularly noticeable in the story of Hampton, a charismatic activist whose short life is a natural subject for cinema. He momentarily succeeded in uniting black power with rival anti-establishment factions, most strikingly a group of white Patriots (depicted in the film waving Confederate flags). Judas suggests that this spooked the federal authorities into extrajudicial execution although even FBI suits are shown baulking at chief J Edgar Hoover’s extremism.

Dual protagonists
Filmmakers including Forest Whitaker, Antoine Fuqua and Casey Affleck had long tried to get a Hampton project off the ground. Rapper Mos Def tested for the role. Eventually, Ryan Coogler (the director of global smash Black Panther) and Charles King, who had produced acclaimed civil rights themed dramas Mudbound and Harriet, joined forces. They championed first time feature director Shaka King who had been wanting to make a Hampton film since 2014.

“Shaka told me about his idea over many years and that he found it hard to get funding for a straight biopic,” Kristan Sprague, the film’s editor, tells IBC365. “The argument was that few people knew who Hampton was. That forced them to come up with a new angle which is part biopic but also more of a crime thriller genre.” 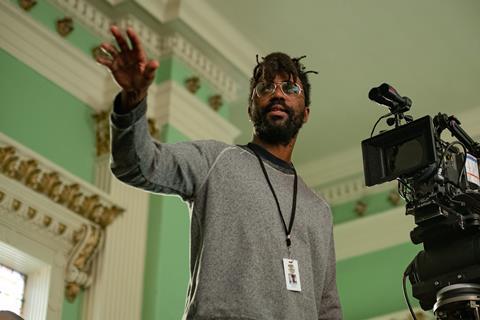 Shaka King: The first time feature director had been wanting to make a Hampton film since 2014

King and co-writer Will Berson merged their ideas with Keith and Kenneth Lucas who had also been working on a Hampton screenplay. Their story wove the rise of Hampton (played by Daniel Kaluuya) with that of petty thief turned FBI informant William O’Neal (Lakeith Stanfield). In doing so, the film is structured a little like Martin Scorsese’s The Departed, with two lead protagonists.

“O’Neal’s character is going undercover with divided loyalties but Hampton is also conflicted about how much force should be used to achieve the Panthers’ goal,” Sprague says.

“Theirs is a very complicated relationship. Fred is a progressive socialist and O’Neal is capitalist. He was cool as long as he was getting paid, although I’m not sure he ever understood why he did what he did.”

Judas and the Black Messiah conveys complex political machinations while compressing the timeframe of events and juggling several key relationships. Those are between O’Neal and Hampton, between O’Neal and his FBI handler (Jesse Plemons), and between Hampton and his fiancée Deborah Johnson (Dominique Fishback).

“This is not a documentary or a docudrama,” Sprague says. “Even if we know far more about Hampton’s life from documentary footage, stills and newspaper articles than anyone does about O’Neal, our story is very much a balance between these two.”

Rainbow coalition
A case in point is a scene which the filmmakers dubbed the ‘Rainbow coalition montage’. This portrays the Panthers uniting with groups of Puerto Ricans and white radicals and features a firey speech from Hampton in front of the Chicago police department.

“We did two different cuts that tried two different things. Jennifer did one while we were working on another. We didn’t go her way in the end but seeing it told differently unlocked other ideas which we did inform our decision making,” Kristan Sprague, editor

Inserted in the sequence is a flash forward of O’Neal taking FBI bribes at a restaurant. Cut back to the steps of the police department the crowd is chanting anti-police slogans. Hampton and Johnson are then shown looking at each through the crowd before the scene cuts to an intimate moment of the lovers together.

“We were working on this sequence almost to the very end,” Sprague says.

“It was originally a much longer scene and included a sequence in which we see Hoover (Martin Sheen) declaring his hatred for the Panthers. We felt we needed to set up Hoover’s personal antipathy to Hampton much earlier so we shifted that to the beginning of the film.

“We’re aiming to show the strength of the Panthers at this time. It’s the high point for them in terms of building an organization with wide appeal. Simultaneously, O’Neal is getting in deeper with the FBI. He’s noticeably well-dressed because he is taking money, even while he is in two minds about doing so. This is also the last scene before we see Fred in jail, so it was important for us not to lose the focus on his relationship with Deborah.” 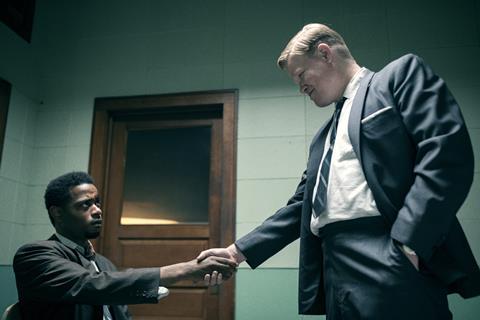 Two protagonists: The film is a balance between the two leading protagonists Fred Hampton and William O’Neal

The shared looks between Hampton and Johnson are mirrored in a later demonstration this time with private glances between O’Neal and Mitchell. Sprague smoothly maintains the story’s momentum by often overlapping dialogue to bleed between scenes.

“There was a lot of to-and-fro in the edit,” he explains. “We’d pull back on Fred’s story so that we only see him through O’Neal’s eyes. Then we’d make a cut of the whole picture that went the other way toward a much more straightforward Hampton biopic. You can only really do that in the editing process where you get to watch all the rushes and select the takes that can tell the same story in different ways until you arrive at the one that feels right.”

The editor Jennifer Lame, hot from negotiating skipped timelines in Christopher Nolan’s Tenet was hired as a fresh pair of eyes and is credited as additional editing.

Compressed timelines
“We did two different cuts that tried two different things. Jennifer did one while we were working on another. We didn’t go her way in the end but seeing it told differently unlocked other ideas which we did inform our decision making.”

While the production shot in Cleveland, which doubled for Chicago in the late 1960s, Sprague received footage from the set at his office in New York. He has been a friend of King’s since high school and began their filmmaking career together making the short Cocoa Loco in 2009. They reteamed for indie drama Newlyweeds in 2013 and two further comedy shorts Mulignans and LaZercism.

Assisting the production was Hampton’s son and Johnson herself (now known as Akua Njeri). Sprague says they were involved during the writing process and spent a lot of time on set.

“It was hard enough for Daniel to have Frank Hampton Jnr watching him every day but Dominique had to sit and perform in the presence of the woman who she was playing. At the same time, Akua had a constant reminder of what happened 50 years ago.”

Behind the camera is Sean Bobbitt BSC who had previously worked with Steve McQueen on Hunger, 12 Years A Slave and Widows. He employs a distinct colour palette throughout the film worked out with production designer Sam Lisenco.

“Scenes with the FBI tends toward drab brown and oranges or very cold blue,” Bobbitt explains. “With Panthers, you have a more vibrant colour palette. There’s a lot of green and yellows. Really, we’re trying to subtly differentiate those two worlds but not in a way they are so disconnected that we don’t believe they are part of the same world.”

Bobbitt says the most technically challenging sequence was the climactic scene of police raid on the Panther’s property and execution of Hampton.

“An overhead shot on a motion control arm goes from room to room to room. To get something like that is expensive so a lot of time and effort went into designing the sequence to that we made the most of the time on set. Since this was also the culmination of the film it needed to have more power to it and horror as well.”