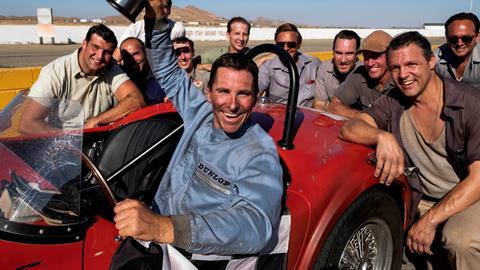 Behind the scenes: Le Mans ‘66 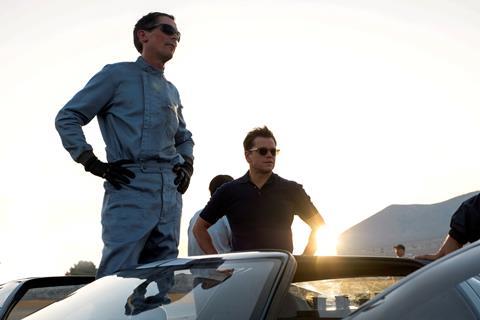 Motor racing drama Le Mans ’66 puts the pedal to the metal for a gritty evocation of the sport’s heyday.

“There’s no point having action car chases if you’re not emotionally connected to them,” says cinematographer Phedon Papamichael ASC GSC. “It becomes boring. We want to feel the intensity of being inside these metal death traps with huge engines strapped to them. We need to feel the asphalt.”

In other hands, Ford v Ferrari (the film’s US title) could be a sterile corporate clash but director James Mangold has always been more interested in character-driven drama. He made the violent X-Men character study Logan and the Oscar-laden Johnny Cash biopic Walk the Line, which was lensed by Papamichael.

“This is an old-fashioned Hollywood movie so we wanted as much as possible to shoot practically” Phedon Papamichael, cinematographer

Based on real events and inspired by such classic 1960s race films as Grand Prix, the intent was to replicate the rebel vibe of the sun-bleached California car culture that resulted in maverick engineer Carroll Shelby (Matt Damon) and equally gung-ho driver Ken Miles (Christian Bale) taking on the legendary racing dynasty Ferrari at the gruelling marathon of Le Mans. 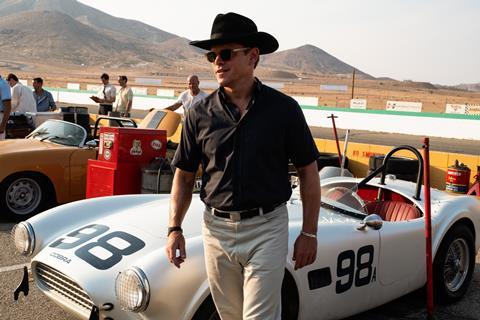 “This is an old-fashioned Hollywood movie,” Papamichael tells IBC365. “We wanted as much as possible to shoot practically. We built over 35 race cars and all the accidents and collisions are real. There’s only one full CG race car in the entire film and that was a shot that we shortened because it wasn’t really our language.”

Instead of sweeping crane shots or drone moves the races are depicted from the drivers’ POV and the most effective way to do that was to be “super close and super low.”

He had ARRI Mini and ARRI LF cameras mounted either on the cars or in pods attached to the back or front of cars parked on a chassis and driven by stunt drivers at speeds up to 100mph.

“Even though the real speeds were closer to 200mph, I wanted the actors to experience the vibration of the car, the g-forces and the sheer racket of these cars that you can’t re-create on a sound stage,” he says.

He typically shot close-ups with wide-angle to capture a sense of the cars passing just inches apart, underscored by using an anamorphic lens.

“We want to show the limited view the drivers had and convey a sense of their danger and proximity to other cars.”

Since anamorphic lenses don’t cover the entire frame of a large-format camera, he turned to Panavision’s special optics team to customise a set of vintage C series glass for use on the show.

“I was using prototype lenses. They gave this beautiful fall off in the background that is very painterly and has a natural vignette which is an effect you usually have to add in post. Anamorphic is really something that works strongly with this movie because you have so much activity in the pits, with all the crews and all that other cars. So, even if you’re in tighter intimate shots, you’re not isolating your actors. You always feel that environment.”

For a wet race scene where spray is getting kicked up by the tyres, he equipped the Ferrari with yellow headlights and gave the Ford warmer white lights.

“That may not be 100% historically accurate, but it acts as a graphical reference so you could identify just identify them in the rearview mirror.”

60s’ vibe
Further visual inspiration came from the films of the 60s and 70s, rather than contemporary interpretations of race car films like Days of Thunder or Rush. The filmmakers wanted grime and gasoline, not glamour and gloss. Grand Prix (1966) starring James Garner was screened on a loop in Mangold’s production office; Papamichael revisited Chinatown (1974) to get a grip on the Kodachrome used to capture the dry Californian sun, and Paper Moon, a 1973 film shot black and white, to get a measure of how much film grain to add in post. 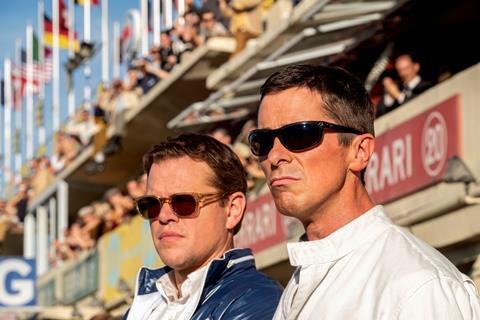 Ford v Ferrari: ”The intent was to replicate the rebel vibe of the sun-bleached California car culture”

“The colours come from [production designer] Francois Audouy’s design and I tried to embrace what was there rather than forcing it with coloured filters or a stylised look,” he says. “For instance, we talked about Detroit’s cooler tones and the desert environment of Willow Springs, where you see Christian Bale and his goggles looking like Lawrence of Arabia. It’s a great contrast with the cooler corporate side of the Ford factory and Michigan, all those Ford Falcons in the assembly line, in a cold steel blue.”

The Le Mans track no longer exists in the way it did in the late 1960s when remarkably there were no barriers on long sections of the circuit. One scene of Christian Bale entering Le Mans town by bus was shot on location but the race scenes themselves were assembled from footage shot at a 400ft pit wall set built at Agua Dulce airport near Los Angeles and on sections of country roads near Atlanta, Georgia.

Editor Mike McCusker even found real footage of the original Wide World of Sports broadcasts of the Le Mans race and added it organically to the cut. 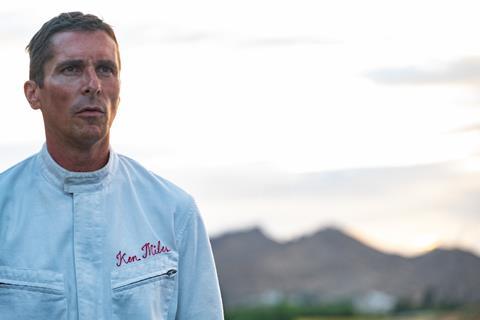 Colour: ”Visual inspiration came from the films of the 60s and 70s”

“James and I have a very similar aesthetic and film language. On set, I might say to my operator ‘boom down, push in, pan a little right’ and on another part of the set the crew would hear Mangold, who doesn’t wear a headset, instructing the very same thing. We’re so in-synch it’s almost scary.”

“My film inspirations were Cassavetes and Truffaut but James and I both share a bond over Japanese filmmakers like Ozu and Italian neo-realism. I noticed that on our first collaboration that he’s very strong visually and will spend a lot of time in colour correction. We’re about the same age too and we both come from outside the studio system, so that helps our connection.

“My father was a painter, photographer, and art director who designed cars. As a kid, I drew cars too. Funny how things turn full circle.”