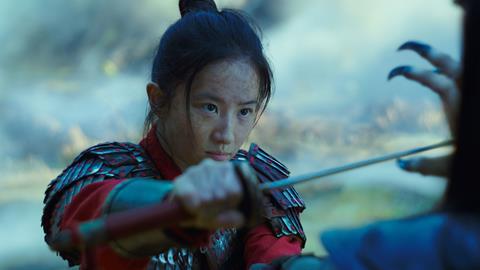 Behind the scenes: Mulan

Cinematographer Mandy Walker frames for the epic and the intimate in Disney’s touchpaper test for theatrical return. 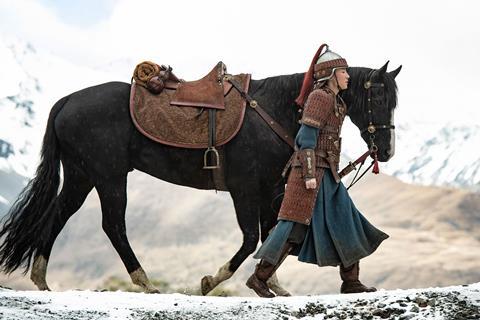 Mulan: One of the first theatrical releases to test consumers appetite

Disney’s live action version of the Chinese folk tale Mulan will be the first real test of audience appetite for a return to cinemas, post-coronavirus. Set for an August release, it will be one of the first major big screen releases after months of lockdown across the globe.

While other films, such as Disney’s Artemis Fowl, skipped theatrical and went straight to streaming, Mulan is a suitably big screen experience which Mandy Walker ACS, ASC (Hidden Figures, Australia) and director Niki Caro have made the most of with an epic scale of locations, large format photography and visual effects largely kept in-camera.

The mythic story follows a young woman who disguises herself as a male warrior to take her father’s place in battle to save him and fight for her country.

Near the beginning of the film, Bori Khan (Jason Scott Lee), the warrior leader of the Rourans and ally of powerful witch Xianniang (Gong Li) attacks a garrison of Chinese imperial troops. The army is seen galloping on horseback across desert toward the fort, then scaling the walls, in one of the film’s many epic action sequences.

How it was shot
“This scene had to be meticulously pre-planned because we are combining several elements of photography shot in different locations at different times,” Walker tells IBC365.

Background plates of the dune-filled desert was filmed by a scenic unit in Northwest China. The horses and riders were filmed in South Island, New Zealand and a set was built on a backlot near Auckland for the garrison including the main front wall and gate, a side wall and reverse of the structure inside in the garrison’s walls. The scene was several weeks in planning and took four weeks to shoot and assemble.

Mandy Walker: “This scene had to be meticulously pre-planned because we are combining several elements of photography shot in different locations at different times.”

“We did a lot of previz for the stunts, ordered for filming in such a way that we could capture individual shot elements. We also used storyboards so we could align where and how to join between one location and another shot,” Walker explains. “There’s not a lot of CGI in this movie. We try to use location backgrounds to reduce the amount of matting and as much as possible we shot in-camera. The horses are ridden by Mongolian stunt riders who travelled to New Zealand for this scene.”

The entire cast underwent two months of military training in preparation for the film before rehearsing battle scenes on location.

“I went with Niki to these rehearsals which might be of 100 people and 60 horses and with a lens and finder I’d line-up angles and take note of the choreography to plan where our camera should go.

“In this scene I’ve used a Russian arm to travel with the horse riders and a cable-cam running on the top. There’s also a drone but only for very wide shots. I don’t like using drones, especially large drones carrying heavy payloads, close to actors or horses because it can be dangerous.” 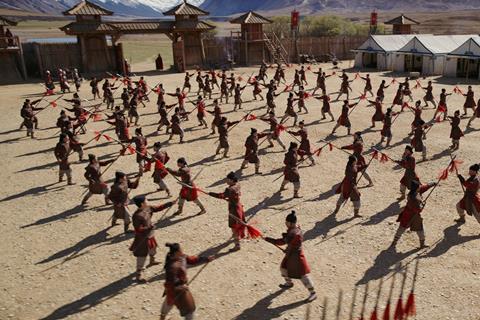 Camera choices: It was important to capture the scale of the story whilst also focusing on Mulan

Camera choice
The galloping riders and stunt work was shot with five cameras including an ALEXA LF shooting 150 frames a second (sometimes slowed down in post to equivalent of 300 and 600fps).

“I didn’t want to use GoPros or Phantoms because I want to acquire at a high resolution to retain maximum information into post to blow up or tweak shots if required,” she says.

The A camera for the picture, though, is ARRI Alexa 65 recording ARRIRAW at 6K. “When Niki and I first talked about the story it was clear she imagined it on an epic scale yet she was adamant that the audience should feel as if they are with Mulan herself at all times. That led me toward the epic quality of 65mm which is a perfect format for capturing vistas and one in which can be very intimate with the subject by using depth of field to separate foreground from background. A touchpoint here is the way 70mm is used to show the relationship between epic landscape and central character in Lawrence of Arabia.”

For wider shots, Walker used Panavision Sphero 65 glass, but for closer portrait shots of Mulan she had a portrait lens specifically made by Panavision and based on Petzval Portrait lenses, developed in the mid-1800s for use with daguerreotype exposures.

“This lens is used predominantly when we see Mulan. I showed Panavision in LA some of the photographs I’d taken on location and also classic Chinese paintings as images for the movie that I feel were an influence and from that they recalibrated an older glass and modified it to fit 65mm.”

She continues, “These lenses have the effect of focusing attention on the centre of the frame and dropping elegantly at the edges which is another key to our visual language for Mulan.”

Lead actress Yifei Liu did most her own stunts including sword and martial arts sequences. This meant that in battle sequences Walker could use long 800mm and even 2800mm lenses and still focus on her face through the melee. “Her presence still felt very intimate,” she says.

Walker went on three location scouts to China, travelling the length and breadth of the country. “I noted that traditional architecture is very symmetrical and Chinese art and painting is often composed with central framing. This is a characteristic of classic Chinese films such as Crouching Tiger Hidden Dragon or those by Zhang Yimou but it’s less of a tradition in western cinema. I felt we needed to centre Mulan in the middle of the frame, aided by shooting spherical, but cropping to widescreen 2.39:1.”

She had another lens built, based on a gaussian lens, that worked with the 65 mm sensor and a 2.39 extraction. “We used that for special moments when Mulan is showing her elite warrior skills. It’s a radial effect with chromatic aberration, which centres her and de-emphasises everything else.” 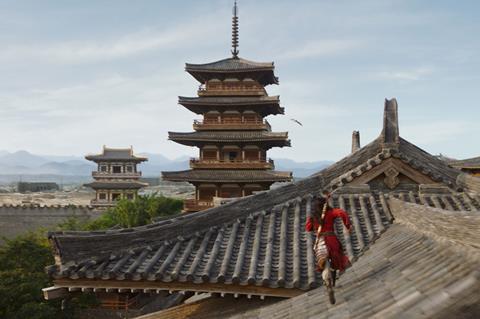 Colour: “It had to look beautiful and that meant subtly delivering a heightened colour palette.” - Mandy Walker

Lighting and colour design
“We knew the desert plates should be shot in the sun so when we were shooting in New Zealand we aimed to also shoot in the sun but of course some days were overcast. With a scene that’s so wide you are relying on natural light - and especially where you have horses running - I over expose the image a little so that when I do lose the sun or have to put in more contrast I can shift it either way in the DI. I sought an exposure that can go either way otherwise I can’t lift the shadows or find the highlights are blown.”

“After shooting digital on a number of films I’ve seen my LUT getting simpler and simpler,” she says. “I find if you have a very tricky LUT that is skewing the colour or contrast it doesn’t always work across the board for every lighting situation. Going from night exterior looks to day interior, and constantly changing light during the day on exteriors. So here I stared with a basic ARRI K1S1 LUT with a low saturation which gave us room to punch up some primary colours in post.”

Rudkin used the CODEX Vault XL with the ALEXA 65 to keep the data wrangling invisible to Walker.

“We would break the footage in the middle of the day so the dailies colourist could start on what we’d been doing during the day and view by the time we wrapped,” Walker says. “That was a big help. We could check everything, including what second unit were doing in real time in China on Moxion, which was helpful when we were working in remote locations in New Zealand.”

She likes to see material at higher resolution, and used PIX for checking continuity on-set, and ensuring that the second unit was on the right track.

“Our colour palette is devised together with production design and costume design who based their look on historical research of the fabrics and colours for the Imperial Palace, the guards, the commoners, the Emperor.

Caro and Walker worked with VFX supervisor Sean Andrew Faden on background plates, reference plates, and the mapping of lenses. They also created a look bible, as a reference for VFX and for Natasha Leonnet, the DI colourist.

“What was most important was the red colour for Mulan herself. This isn’t a documentary of course, it’s a Disney film so it had to look beautiful and that meant subtly delivering a heightened colour palette.”