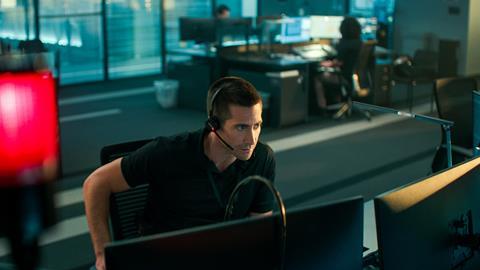 Behind the Scenes of The Guilty with sound mixer Ed Novick

The location sound recordist is normally incognito on set. Not so in the case of The Guilty, a thriller unusually reliant on audio to convey its story and made crazily complex by being shot under Covid conditions.

Directed by Antoine Fuqua (Training Day) and starring Jake Gyllenhaal, the story of The Guilty follows Los Angeles police officer Joe Baylor on duty at an emergency call centre. When Baylor takes a call from a kidnap victim trapped in a car, events spiral out of control.

“There are lot of movies you watch while you’re cooking dinner or the kids are doing homework,” says Ed Novick, the production’s sound mixer. “This is not that movie. This requires you to pay attention.” 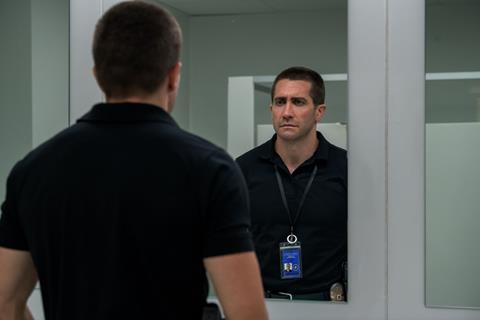 All the action takes place from Baylor’s aural point of view as he engages in increasingly frantic communications via an official Bluetooth headset and unofficial mobile phone with various protagonists including his LAPD partner, the victim, a distressed child and a highway patrol dispatcher.

None of these characters is ever seen. The audience, like Baylor, relies entirely on the sounds and dialogue he hears - an artifice from which the drama derives its real-time intensity.

The Netflix release is a remake of 2018 Danish film Den Skyldige and, like the original, would have been conventionally recorded with the actors on set or in adjacent rooms.

Covid nixed that idea. Filming took place in November 2020 which meant that while Gyllenhaal was filmed in the 911 call centre set all the off-screen actors, including Ethan Hawke, Riley Keough, Christina Vidal, Paul Dano and Peter Sarsgaard, voiced their parts from their own homes. Rehearsals were made on Zoom two weeks prior to shooting.

“On the face of it a film featuring one main actor, mostly seated, in just two rooms should be simple but it proved to be among the most challenging projects I’ve worked on,” says Novick, whose extensive CV includes Twister, Spider-Man: Far from Home, Moneyball, Mulholland Drive and Christopher Nolan’s The Prestige, The Dark Knight and Inception.

“On the face of it a film featuring one main actor, mostly seated, in just two rooms should be simple but it proved to be among the most challenging projects I’ve worked on,” Ed Novick, sound mixer

“The Guilty had too many moving parts. I was very much the switchboard operator with all the audio coming in and out of me.”

The logistics of scheduling each actor’s performance was one challenge. In most cases the actors were scheduled to perform their role remotely at the exact time they were needed for the scene.

In some cases, due to time zone difference, an actor was pre-recorded and Novick was able to play that back through a telephone system on set. In either case, Gyllenhaal was able to hear the actor’s audio through his operator headset or his phone since he is making or receiving calls on both throughout the movie.

“If at any point he can’t hear what he is supposed to hear, we cut and stop and someone says ‘why aren’t we going?’ and the fingers will point at me,” Novick says. “So, I wanted to avoid that.”

His first step was to create professional recording kits and send them to the actors. “These had to be small enough and simple enough for non-professional audio people to use,” he says. “And good enough for us to get quality audio.”

Each identical kit contained a Sound Devices MixPre3, a Shure SM58 microphone, a desk stand, a flexi-arm with a clip, Sony 7506 headphones and a pair of USB cables. Factory-sealed, disposable, screw-on mesh windscreens were included with every SM58 to assure Covid safety protocols. SD cards were formatted, folders were created and the gain was set (based on Zoom rehearsals, Novick had a rough idea of how loud each character would be).

Instructions were created with photos and YouTube videos about how to assign audio to the correct folder; how to operate the MixPre3 faders and how to get timecode and jam it into the recorder. A spreadsheet was also created to map out which actor had which rig on which day, and were recording to which folder.

“The interface for the MixPre3 I sent them - which was also the recorder - had no battery, even though it could be powered that way,” Novick says. “By requiring them to power from the USB of their PC the interface now became the way to communicate and move their audio around. So, we kind of tricked them in that regard. But that’s okay - actors don’t want to be spending their day working sound.”

Every off-screen actor recorded themselves. Novick had no local recording from them until well after production wrapped and the kits including the card media were sent back. As a placeholder they used recordings from the phone calls they made performing their lines.

“That became the working track and what everyone was listening to on set until we were able to retrieve the real audio from the actors and provide clean isolated tracks to post production,” he says.

“On the rare occasion where an actor forgot to press record at home, we used the audio recording we’d taken of their phone call in the final mix. Jake also wore a hidden lavalier as a backup to the backup should other audio parts fail.” 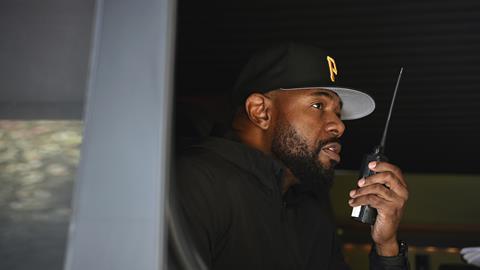 Director Antoine Fuqua: Past work include films like Training Day

Fuqua shot three cameras simultaneously for takes of 25-30 minutes to film the drama like a play. One of the challenges was how the microphone boom operator could work shots of this duration.

“It’s hard enough to keep your arms over your head holding a mic for two minutes let alone do it for 25 minutes,” Novick says.

They rented an exoskeleton originally designed for industrial work to alleviate the physical strain. It had never been used on an entire film before but, when modified, helped operator (Knox White) to maintain the boom for extended periods.

“Without that we’d have to resort to lavaliers or lesser quality mics,” he says.

“That Jake’s character absolutely belongs in the room where he is working is testament to how good that overhead mic was working.”

Timecode allowed the audio team to keep the cameras, the slates and all recorders in-sync so the material could be assembled down the line. That’s fine on a set where production has local control over timecode. In this case, with actors in different time zones (LA, New Orleans, Austin, New York and Toronto), Novick made novel use of satellite broadcast timecode. “I’d not heard of its use before in drama,” he says.

A Betso GPS calibration module, connected to a Betso SBOX-1N sync box, was able to output timecode on Greenwich Mean Time (GMT) to the recorders used by the actors as well as to Novick on set. The Czech manufacturer had actually discontinued the line but the production purchased its last remaining 11 units.

“That allowed us to create 10 actor’s kits and have everybody in sync on GMT. It was applied to everybody’s recorder as well as camera and slate on set so everyone was in sync via satellite no matter where they were.”

One actor based in London had their performance pre-recorded because of time difference and his schedule. This was loaded into Novick’s computer and played back on set as if it were live.

“As far as Jake was concerned, he was getting the right cues at the right time. The fact that there’s no-one on the line doesn’t matter. What it did mean is that I had to be the other actor to time the cues by triggering those samples off his dialogue. In fact, in those instances, Jake isn’t playing his scene with the other actors, he is playing with me.”

“Part of the allure of movie magic is you don’t know how the sausage gets made,” Ed Novick, sound mixer

For the call centre set the production also had to synch other elements to drive the story. These include Baylor’s cell phone, all the computer and video screens (in a switch from the Danish original, The Guilty takes place amid raging California wild fires) and the red call light that illuminates when a 911 call is answered. When he hangs up, the red light goes off.

“There is a dimmer board controller doing this live on set but if they can’t get good audio cues then they can’t time the lighting accurately. We gave him a little mixer with a lot of options about what he could hear. If the red light was wrong, the take is no good and we had to do it again.”

Meanwhile, Fuqua is listening to both Jake and the other actor’s audio and could communicate on-set using a walkie-talkie or loudspeaker.

“I need to make sure Jake can always hear what he needs, whether that’s the live actor or a pre-record or a surrogate standing in. That includes cues that were essential for him to hear, like answering machines. I monitored the phone calls, Knox’s boom, the actor lavaliers and my laptop, busily switching solo between them.”

The Guilty: Netflix release is a remake of 2018 Danish film Den Skyldige

There were also on-camera sound effects that fell under Novick’s purview, such as the toilet flush that opens the first scene. For that alone he sampled a dozen different toilets in the building they were shooting in, in order to match the picture to just the right sound.

Gyllenhaal is also a producer on the film and knew production would be difficult. “We worked very closely to create timings for certain things to happen. He’d say, ‘Ed, give me two rings, give me three rings, or wait a beat then start, or fade this out so I don’t have to hear any more dog barking’.”

None of this is apparent in any way when watching the film, which is as it should be. As Novick says: “Part of the allure of movie magic is you don’t know how the sausage gets made.”

Previous to this, Novick says Money Monster a 2016 film largely set in a television studio was his hardest gig. He phoned director Jodie Foster after The Guilty to tell her that her film was now in second place.

“Normally no one pays much attention to the production mixer,” he says. “This time the location sound is integral to the action but I wouldn’t want to repeat the experience under Covid. It was just too hard on production and on the sound department. That said, it got me closer to the centre of the filmmaking process than I’ve ever been.”