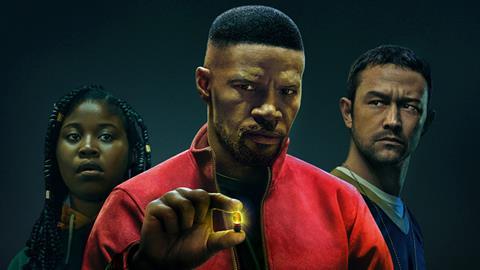 Behind the scenes: Project Power 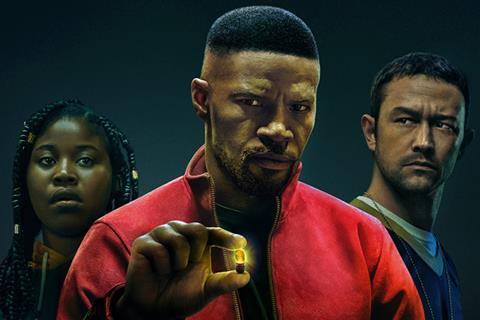 Project Power: A new take on the superhero genre

In Netflix’ recently-released sci-fi action film Project Power anyone can potentially tap into their unique super power, a conceit that gave the film’s VFX team tremendous scope to wield their own.

“We found ourselves in a really enviable place with almost a blank canvas to explore the drug and its effects,” explains Ivan Moran (Arrival, Ghost in the Shell). “A lot of the characters were changed based on the advice or designs we came up with.”

Like most VFX Supervisors, Moran’s involvement in the storytelling begins with interpreting the director’s vision into concepts that can work technically and within a budget. He was instrumental in guiding the production away from wall-to-wall CGI and toward shooting as much practically as possible.

“When I first met directors Ariel Schulman and Henry Joost it was clear that most of the movie plays as a kidnap crime thriller and they wanted a gritty, visceral reality to the VFX to match. There’s no fantasy world or alien planet to hide behind where you can take a more stylistic license. This had to be real.”

“In my personal experience I find it easier to copy reality rather than completely invent it. If you create a shot out of nothing and its 100 percent CG you risk falling into the uncanny valley where it might look real but doesn’t feel right. In contrast, when you work with real elements you can build from highlights and shadow detail. Two-Face was half real, half not so that was the approach I took.”

Starring Jamie Foxx, Joseph Gordon-Levitt and Dominique Fishback, Project Power depicts a murky world where a new designer drug can, for good or for ill, unlock five minutes of latent power in the person taking it.

“The script suggested that individual super powers were derived from the animal kingdom in some way,” Moran says. “The problem we had at the beginning was why does everybody get a different power and how does the pill actually make it work? The director’s tasked me with coming up with some pseudo-science to explain this.”

With art director Jonathan Opgenhaffen and production designer Naomi Shohan Moran’s research led them to root the drug’s side effects in actual science – that every living creature is subject to subatomic vibrations.

“Each one of us experiences subatomic vibrations slightly differently and make us unique,” he says. “Rather than altering the body itself, the power pill amplifies what is already there. It chemically changes your physiology to such an extent that it manifests itself physically.”

This idea was coupled with the notion that all of us share DNA along the chain of evolution with every other type of creature or matter in the universe.

“The power pill awakens remnant DNA, those animal basic instincts, and amplifies their innate characteristics,” says Moran. “For example, the character in our story who radiates fire signifies that he is boiling with rage on the inside.” 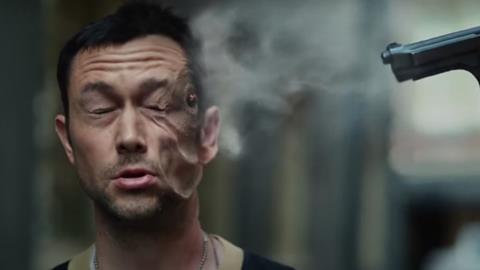 Ivan Moran: ”We tried all sorts of ways to do this and settled on the old school method of firing an airgun at him. What gave it away was that his hair flapped up so we had to replace it with GG hair.”

Animal instincts
One character started out in the script as an invisible man but Moran’s pseudo-science suggested they base the design on that of a cuttlefish which has the ability to camouflage according to its surroundings.

Another key sequence references an armadillo’s leathery protective shell. In this sequence there’s a full-frame shot of Frank (played by Gordon-Levitt) staring into the camera as he takes - and survives - a bullet point-blank to the head.

“The last thing we wanted was to create a fully-CG face of Frank/Joseph particularly because his face fills the frame. We tried all sorts of ways to do this and settled on the old school method of firing an airgun at him. What gave it away was that his hair flapped up so we had to replace it with GG hair.”

This was filmed in slow-motion using a Phantom Flex 4K at 900 frames per second but not even that was fast enough to capture the muzzle flash or speeding bullet of a real gun so these elements were added digitally, referencing gun shots filmed at over 70,000 fps.

In keeping with the film’s aesthetic realism Moran devised an ingenious solution for an eye-catching sequence in which the character played by rapper Machine Gun Kelly becomes a superheated body of fire.

Not only did this involve overcoming the perennial film-making challenge of convincingly setting a cast member on fire, but the sequence took place over 100 shots, in nine different locations and culminates with the characters being dunked underwater. 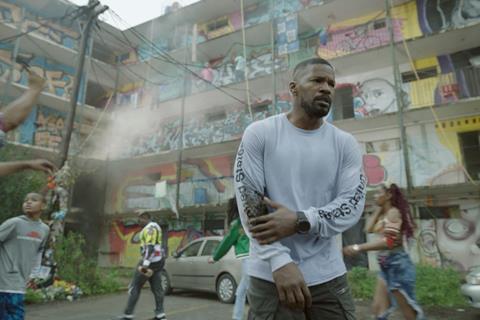 Jamie Foxx: Power reveal at the end was the most challenging for the VFX department

“The hardest problem with fire is lighting. If you shoot an actor and digitally put fire on them it will always look fake because the actor is not illuminated by the fire itself.”

Moran and the prosthetics and electric team developed programmable strips of flickering LED lights which were applied as a layer to the actor’s body encased in a head-to-toe prosthetic suit.

“The process took up to eight hours to install and MGK chose to wear it three days in a row to not have to go through it twice,” recalls Moran. “It was about 20-30 panels with wiring, battery packs and transmitters underneath the prosthetics including two on his collar bone to illuminate his face. We ran a looping fire gif so we could swirl ‘fire’ around his body, extinguish and reignite it and control colour temperature.”

As well as providing a flickering, fire-like light source on the actor, the suit also illuminated walls and objects as MGK ran past them. They also had a stunt actor - actually on fire this time - recreate the scene to provide real-life reference.

“It is ground-breaking. LED suits have been used before but rarely on camera. We just warped the in-camera effect in post so they look like coals on a camp fire as if illuminated through his skin. It would not be possible without that interactive light source.”

Powering up
The most challenging scene was the finale in which Jamie Foxx’s character Art lays bare his explosive inner power.

“It’s easily the most challenging sequence I have ever attempted to devise, plan and film in my career,” says Moran. “The shots were filmed at night, on location, in rain, at extremely high camera speeds which was immensely challenging given the lack of light.”

The pseudo-science for Art’s power was based on how infrasonic soundwaves interact with physical surfaces and can theoretically change the state of water into plasma.

“If you put two halves of a grape into a microwave, and run away, it will turn into plasma,” says Moran of the real-world effect he was looking for. “I don’t recommend you try that at home.”

He continues, “We’ve seen so many explosions on film from nuclear bombs on down but we had to make this one different. We didn’t want the energy blast to come magically out of him. We want the audience to understand the physics and chemistry of the explosion actually happening.”

The problem was complicated by having to explain his idea to directors, VFX team, cast and crew. “I could close my eyes and imagine how that it was going to look but no one else could. I’d explain it to my team and they’d ask ‘is this really going to work out?’ I had to trust my gut and experience more than ever before because I didn’t want it to look like a normal explosion. That’s why it became a drawn-out slow-motion ballet which is visually telling you that Art is creating this explosion.”

Bang for your buck
Close-ups were shot on the Phantom at 900fps, wider shots on a Sony Venice at 200-300fps which caused immediate lighting issues shooting such high speeds at night. Stunt performers were flung around the set for later digital augmentation, dozens of background details were added so VFX could distort them to show the shockwave exploding away from Art. The actors were also instructed to move in slow motion to enhance the effect.

Framestore (London and Montreal) completed around 400 shots on the show including all the most complex character effects. Image Engine in Vancouver and Outpost in Montreal added 600 ‘invisible’ FX including CGI of the large tanker in the finale. Distillery VFX in Vancouver worked on a car crash sequence.

Moran works for Framestore but was loaned out to Netflix as overall VFX Supe on location in New Orleans for the show.

“We’ve seen so many explosions on film from nuclear bombs on down but we had to make this one different. We didn’t want the energy blast to come magically out of him. We want the audience to understand the physics and chemistry of the explosion actually happening.”

“There are supervisors who are permanently freelance but increasingly a studio will pick a lead house to do most of the VFX and that house will nominate a supervisor to go client side and run the project from a VFX standpoint,” explains Moran. “The advantage is that if you are in house you know the pipeline and crew like the back of your hand. Vendors set up slightly differently to arrive at results so close knowledge of a lead supplier gives you a short hand to making key decisions.”

He adds, “We didn’t use cloud on this show but it’s a trend that will definitely happen. The main hurdle is security. It’s not that cloud is insecure but certain studios with major VFX projects are acutely sensitive to security. Suddenly the cloud makes even more sense as necessity when artists have to work from home. They are basically windowing into remote servers which causes slow-downs and lags but cloud software and connectivity will become much more efficient.”

Moran enjoys his super power which as with all the best VFX supervisors is a mix of creativity and technical mastery.

“At school I was really good at science and geeky but I was also into arty, floaty, theatrical stuff,” he says. “I struggled to choose a career. There seemed no way to combine them. I thought of being an actor or a scientist. So, I’m incredibly fortunate that this career offers a mind meld of both.

“I’ve done a lot of photography and creative imagineering at the same time you have to take a brief and technically disseminate that the team. That involves working out what is technically achievable and cost efficient and involves a lot of to and fro to arrive at solutions. It’s this strange mix of the two disciplines that I love.

“Over and above that, everyone always wants to do something different, so we’re constantly coming up with new schemes to produce something that no-one has seen before.”