While side-wall projection and immersive audio are bringing fresh dimensions to the cinema experience, 3D looks like it might have peaked (again). With movie theatres currently closed around the world, David Davies considers the emerging technologies that could help encourage cinemagoers to return post-lockdown. 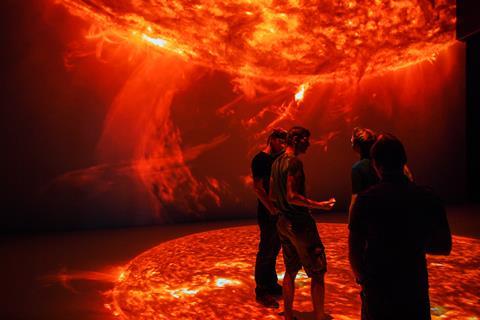 Cinemas across the globe are shut due to the coronavirus pandemic, and with no sign of lockdown being eased in many countries, the future of cinema hangs in the balance.

Reduced capacities are a near certainty when venues do reopen, due to the continuation of social distancing. And some cinemas have said they won’t reopen even when rules are relaxed, meaning there is plenty of cause for concern regarding cinemas’ short- to medium-term commercial viability.

As well as making people comfortable with the idea of returning to public spaces, cinema operators with deeper cash reserves will also be looking at how new technologies and facilities can strengthen their offers. Half-a-decade ago, it’s probable that their efforts would have revolved around 3D, but over the last 2-3 years both studios’ and audiences’ appetite for the format has waned. (It remains to be seen whether James Cameron’s claim of “sumptuous” 3D for his forthcoming Avatar sequels – the first of which is due for release in December 2021 – can alter the outlook.)

In lieu of 3D taking off in the way that some industry watchers expected, cinema operators have increasingly embraced technologies including side-wall projection and next-generation audio. But while many cinemas specifying a new projector today would favour one with a 4K chip, there is no expectation of an imminent stampede towards 8K. 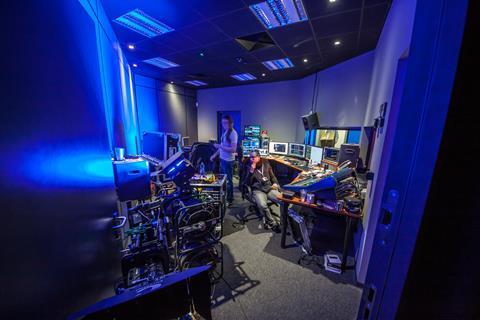 PSNC studio: Focus’ on developing tools for the next generation of immersive media

Ultimately, “the adoption of any new creative technology is driven by the availability of content; the content is always king,” says Maciej Glowiak, head of the new media department at Poznan Supercomputing and Networking Center (PSNC), which is a partner in the EU-funded Immersify project to develop tools for the next generation of immersive media.

If the appeal of 3D has ultimately been limited to a specific strain of ‘big spectacle’ movie, there are indications that these other new technologies will resonate more enduringly with a broader cross-section of creatives.

New experiences on the Horizon
If coronavirus had not intervened, the 2020 Cannes Festival – which was due to take place from 12-23 May – would have been an ideal opportunity to gain a clearer understanding of cinema’s possible immersive future. For it was at this event that Immersify – which has been a five-year collaborative project involving manufacturers and research organisations that was initiated under the European Commission’s Horizon 2020 framework programme – was planning to showcase its efforts supporting “a whole new kind of immersive media experience combining high-resolution video, ultra-wide vision field, spatial sound and user interaction.”

The project partners are now working on alternative methods of presenting their findings, but even without this it is evident that Immersify has done a great deal to push at the boundaries of creative cinema. “During three years working with five partners we have [been active in] multiple areas, including video coding, 8K, 3D, laser scanning, dissemination at art and film festivals – for instance, the first 8K screening to take place in Cannes was done by us – as well as experimental content, interactive streaming and collaborations with artists,” says Glowiak.

While the extent to which individual technologies will achieve traction remains to be seen, the Immersify team repeatedly cites two primary trends that it believes will define the cinema of the future. Cécile Dumas is project officer at another Immersify partner, Marché du Film, which is the business counterpart of the Cannes Film Festival.

“On one hand I think we will the immersive experience becoming more of a strong argument for visiting the cinema,” she says. “On the other hand, we will also see [venues experimenting] with VR content and creating new experiences around that.”

Among those cinema operators who do pursue a more adventurous route, it’s probable that there will be more diversity than has previously been the case. In the case of their conversations with IBC 365, Immersify partners refer to demos variously involving 8K, 12K, 360-degree video, Ambisonics surround sound and ‘next generation VR’. It seems unlikely that any one operator will have the wherewithal to implement all of these technologies, so tailoring the use of technologies to the specific demographics of the cinema will surely become more critical in the future. 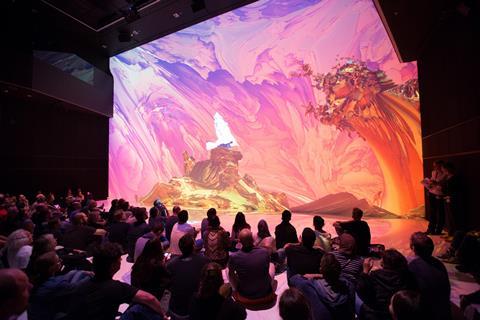 Ars Electronica Futurelab: Has looked at how to provide a joint experience for people

Roland Haring, technical director of Immersify partner Ars Electronica Futurelab (Austria), indicates that the ability to translate new technologies to compelling collective experiences will also help determine which approaches achieve lasting traction. “A core problem that there has been with many immersive technologies to date is that they have been geared towards single users, or [at best] a limited number of users,” he says. “Hence one of our real priorities has been to [look at scaling up to accommodate] groups of 50 or 100 people, and then provide a joint experience for them all.”

This has reached its fruition with the Deep Space 8 environment, which in its installation at the Ars Electronica Center combines 6 x 9 metres of wall, 16 x 9 metres of floor projection, laser tracking, 3D animations and 8K resolution visuals.

Leaning towards laser
Such developments suggest that there will ultimately be a greater convergence between cinemas and the kind of experiences encountered in contemporary museums – but what of shorter-term changes, especially when venues are certain to be battling financial pressures for the foreseeable future?

“On one hand I think we will the immersive experience becoming more of a strong argument for visiting the cinema,” she says. “On the other hand, we will also see [venues experimenting] with VR content and creating new experiences around that.” Cécile Dumas

Mark Kendall, business development digital cinema EMEA region at NEC Display Solutions, suggests that a phase of infrastructure renewals was highly probable if Coronavirus had not arisen. “Last year was, as expected, a year in which operators started to take stock of what they have as they near the end of the Virtual Print Fee,” says Kendall, referencing the subsidy paid by film distributors that has helped cinemas to upgrade to digital projection.

Where operators did acquire new projectors last year, they reflected a move away from xenon lamps. “2019 marked a very significant switch to laser-based products,” confirms Kendall. As well as this segment of the market continuing to mature thanks to new product launches – NEC itself launched the NC1402L digital cinema projector at the end of March – there is also a more widespread “understanding of the benefits of [laser projection] in terms of cost of ownership and light output. While the initial price is higher, the operational costs are lower and cinema operators can therefore gain financially over the lifetime of the projector.”

As and when the financial outlook improves for operators, Kendall expects cinema designs to develop in several primary ways, notably the continued adoption of immersive audio and side-wall projection. With the latter, “the film is still projected onto the main screen, but with additional elements in the peripheral vision projected onto the side-walls of the auditorium,” he says, adding that one of the benefits of this approach is that a change of main projector is not normally required.

Smaller-scale immersive deployments that can be achieved with a minimum of investment are sure to appeal to cinema operators as they work to make their venues more attractive in what is destined to be a more economically uncertain decade than anyone could ever have predicted.