The cost of online piracy will hit $52 billion by the year 2022, according to a report by Digital TV Research.

It found that revenues lost to the piracy of TV episodes and film will have nearly doubled from 2016 to 2022.

Some 138 countries are included in the study, which doesn’t include sport or pay TV.

Digital TV Research Principal Analyst Simon Murray said: “Piracy will never be eradicated. However, it is not all bad news. Piracy growth rates will decelerate as more effective government action is taken and as the benefits of legal choices become more apparent.”

Murray added: “Legitimate revenues from OTT TV episodes and movie overtook online piracy losses as far back as 2013. The gap between the two measures is widening.” 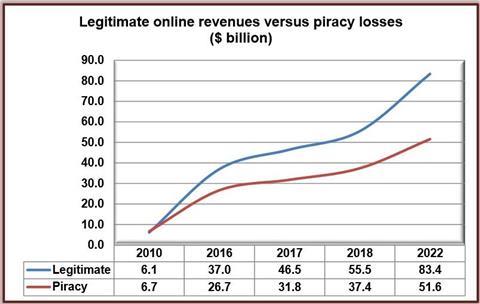 Much work remains to be done as the scourge of online streaming piracy is spreading worldwide, according to Digital TV Research.

In an article for IBC365, Production and media technology expert Spencer Stephens, the former Chief Technology Officer of Sony Pictures Entertainment and VP of Technology at Warner Bros, warned that “nothing will be completely effective, and DRMs and anti-piracy measures are best seen as a way of degrading the consumer experience of illicit use.

”This is more effective when it is accompanied by an excellent consumer experience for legitimate use. Stopping redistribution of content involves extensive full-time monitoring and rapid response, particularly with rebroadcasting of live events.”

The US will continue as the largest country by piracy losses, with $11.6bn forecast by 2022.

Read more Game of Thrones, dubbed the world’s most pirated TV series, returned for the seventh series in the summer. Read about efforts to counter piracy here

However, Asia Pacific is set to become the largest region for online piracy in 2018 when it overtakes North America.

China has taken measures to combat piracy, but it is still a major problem. Its revenue losses will climb by $5.5 billion between 2016 and 2022 to $9.8 billion. However, China’s gap between legitimate revenues versus piracy losses will improve from a deficit of $1.2 billion in 2016 to a surplus of $2.4 billion in 2022.

The problem will not be dealt with as effectively elsewhere. India will climb from eighth in the 2016 rankings ($700 million losses) to third in 2022 ($3.1 billion losses). Brazil will add $1.1 billion in losses over the same period.