Ever since the launch of the first iPhone to offer HDR capture in 2018, such devices have been used increasingly widely for different aspects of content production. But a new project being filmed by director Kevin Augello and starring Rob Small, entitled From Fire… To Ice, is taking this to a whole new level with the shooting of a full-length documentary on iPhone 12 Max Pro devices incorporating Dolby Vision HDR. 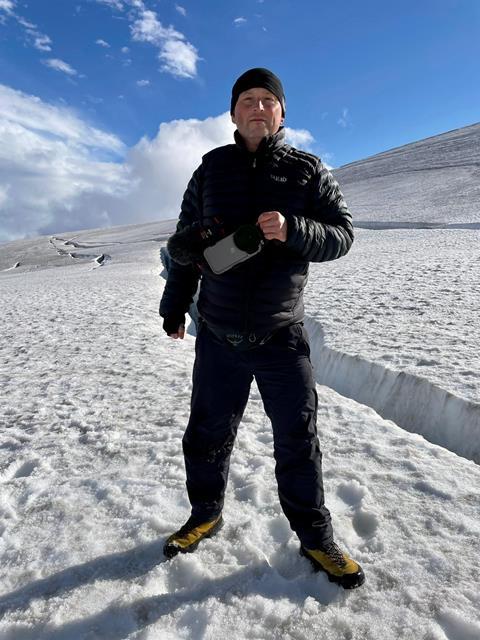 The entire production uses only mobile phones where possible

“I am used to traditional cameras so it was fascinating to me when it was suggested that filming an entire production using only mobile phones with Dolby Vision HDR could be possible,” recalls Augello, who is the Founder and Owner of New Earth Films and has worked directly with broadcasters including the BBC and Discovery Channel Networks. “I realised that there was a lot of scope for exploration as [filming a complete documentary] on an iPhone isn’t exactly a ‘go to’ approach for professionals at the moment.”

Raising the stakes even further is the subject matter of From Fire…To Ice, which will focus on an extraordinary 1,400km cycling circumnavigation of Iceland by Augello and Rob Small. A dive instructor by trade, Small suffered 43% full thickness burns to most of his lower body, back, side and one arm when caught in a 2010 house fire in Zanzibar, where he was working at the time. Flown back to London’s Chelsea & Westminster Hospital, he was initially given only a 27% chance of survival. But after being placed in a coma for three weeks to rest, Small underwent a series of operations and made a remarkable recovery – ultimately leaving hospital after six months. 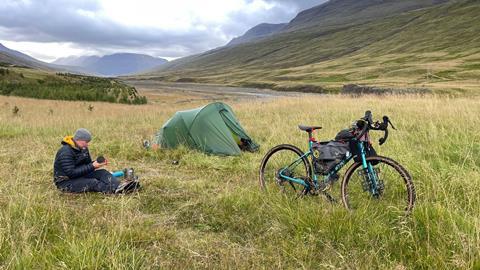 The team’s set up for their trip

Aware that mental health problems are common among burn survivors, Small resolved to set himself a challenge that he could focus on. Linking up with friend Augello, the pair planned for a trip to the South Pole before Covid intervened and made it logistically unfeasible. Several other options were considered before they decided upon Iceland – a location that will also allow Small to highlight the threat of climate change by visiting the site of the former Okjokull Glacier, where a plaque has been placed that contains an apology to future generations for the failure to combat carbon emissions.

“Iceland had been on the bucket list for many years, but I had not considered it as a possibility for this adventure with Kevin until he suggested it and I realised it would be a great opportunity to dive between two tectonic plates – something that had long been number 5 on my diving to-do list,” recalls Small. “I remember clicking through fantastic image after fantastic image of the [underwater habitat] and thinking that we had to go there.” 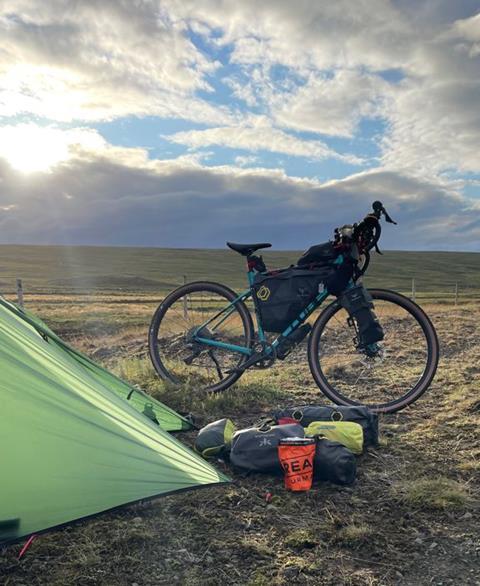 So it was fortuitous that around this time Augello found himself in conversation with Rob France, Dolby’s Director of Home Content Engineering. “When we heard about this expedition we were really keen to assist where we could to make it happen,” recalls France. “The challenge that Rob is taking on is a story that we really want to see being told. With Iceland as the backdrop we knew that there would be lots of stunning scenery and landscapes which would benefit from being delivered in Dolby Vision.”

As the discussion continued, the need to support flexible and lightweight shooting of both Small and Augelloregardless of terrain and climactic conditions began to suggest a very singular solution. As France notes, it was evident that the project would present “some challenges in terms of the amount of equipment, power and other issues related to the remote and hostile environment. This made it an ideal project to try out the workflows offered by using Apple iPhone 12 mobile phones with Dolby Vision HDR. Choosing to use phones as the primary cameras for this project has enabled kits and workflows that are lightweight, require relatively little power, and support quick edits on the road while capturing the stunning imagery that Iceland has to offer.” 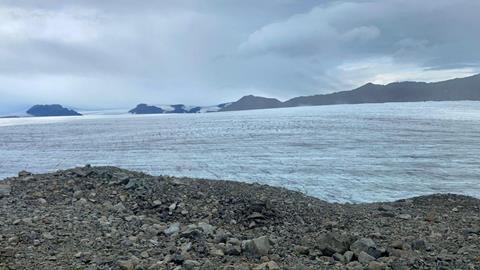 Several difficult issues had to be addressed during the run-up period, of which Augello remarks: “I have never done so much R&D and preparation in my life!” With the expectation of long filming days, having a workable storage solution was always going to be critical. “The cloud was not a realistic option unless we were going to rely on random petrol station WiFi! So what we are going to do is extract the files to my laptop via FiLMiC Pro, which is a leading 4K-capable app developed for smartphones, and then on to a series of SSD cards. Of course, the iPhones have significant storage, so we can use that as well.”

With two iPhone 12 Pro (512GB each) and two iPhone 12 Mini (128GB each) devices at his disposal, Augello has also introduced a customisation designed to capture high quality audio. “The reality is that if you relied on the [onboard audio capture] you would pick up a lot of ambient noise – for example, high winds – and in our case, sounds related to cycling. Audio was always going to be absolutely crucial to this project, so ultimately we opted to use a Rode VideoMic NTG, which is a broadcast-grade shotgun mic optimised for on-camera use, attached to an iPhone 12 Pro.”

The only other camera will be a drone-cam to capture the progress of the cyclists from overhead. “To have those kind of aerial shots in a programme like this is now generally expected by viewers. It would not look right if we relied solely on capture by [ground-level] devices,” admits Augello.

“I am used to traditional cameras so it was fascinating to me when it was suggested that filming an entire production using only mobile phones with Dolby Vision HDR could be possible,” Kevin Augello

It is hoped that a lot of editing and production work will be able to take place during downtime on the road. Beyond that, Augello is hoping that one of the major streaming services will want to show the resulting 60+ minute film. “Failing that,” he adds, “it could always be a high quality documentary for YouTube.”

With Vimeo having just announced support for Dolby Vision, there is now a global video sharing service which provides an alternative outlet to the major streaming services for Dolby Vision content. The workflows being proven by Augello are likely to be replicated by many content creators looking to distribute similar productions directly to their viewers. 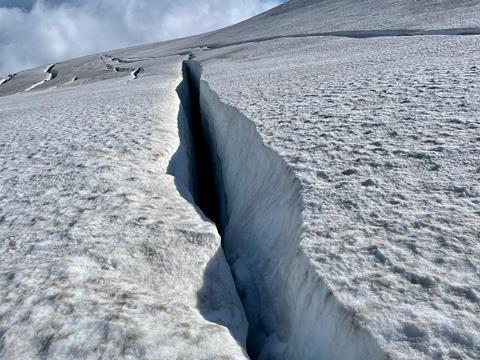 A crevasse in one of Iceland’s glaciers

Speaking a little over a week before the flight to Iceland, both Small and Augello admitted to feeling a combination of excitement and trepidation. “It is a very challenging project,” admits Augello, “but I am really enthused by the rig we have put together and can’t wait to capture the trip in Dolby Vision, which is capable of enhancing a production with an ultra-vivid picture, superb brightness, a great colour palette, and darker shadows. It will also help us to create a cinematic look that has been a priority from day one.”

For Small, who has also learned to use the iPhone to film Augello, there has been a “definite learning curve” in becoming capable of getting good results in what will be unpredictable climactic conditions. “But it has helped that we have a set-up that is very intuitive and easy to use,” he says.

Of course, Small will also have physical challenges to overcome. “I spent six months in hospital, have had 35 operations to date, and had to learn how to walk again, which took 2.5 years,” he says. “So the biggest unknown is my body as we are going to be in an environment that will be harsh on both body and mind. Hence my feeling both nervous and excited as the trip approaches.” 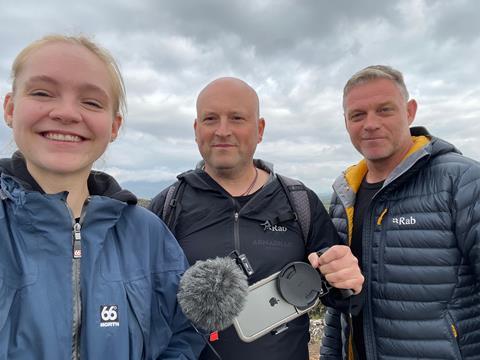 Augello is also trepidatious about the 1,400km cycle, but indicates that a level of adversity is appropriate given Small’s backstory. “It is going to be very windy and cold, and there will probably be a lot of rain,” he laughs. “But on the other hand, it’s going to be wonderful for us to have this experience together, which will obviously reflect how Rob overcame extreme adversity after the fire.”

To see the initial YouTube videos from the expedition visit: https://www.youtube.com/channel/UCADyFdL4Lcnb2wIDaSKphag/playlists