DPP predicts where next for the broadcast industry

Getting ready for the cloud will be the most important task for broadcast businesses over the next couple of years, according to the Digital Production Partnership (DPP).

The DPP asked a selection of its members, from right across the industry, what they think will have the biggest impact on broadcasting in the next 12-24 months, and “there was a lot of very lively debate,” revealed Mark Harrison, the DPP’s Managing Director.

“We are in a period of genuine transformation in media, in which everything we do is becoming very interlinked, and extremely different,” he said.

For example, in OBs, just five years ago, production was essentially a series of handoffs, from one stage of the production to the next, “but that is no longer the case. You look at the world of IP and its complexity, it’s actually getting pretty difficult to even understand how you draw up things like contracts as you work out who is responsible for a particular part of the activity.”

“We are in a period of transition” - Mark Harrison

It is not just a matter of mapping where all the interdependencies lie, but also of working out how to discuss them.

“If you speak to a company like Equinix that specialises in the cloud, they will talk to you about multicloud, cloud exchange interconnectivity, edge networks,” but the technology is so new that not everyone agrees what each really means. “Because we are in a period of transition, we haven’t yet managed to translate the change that is going on in to a ready understanding in our businesses,” he said.

One of the biggest changes in the business is that “there is now more audio/visual content commissioned and made for non-broadcast use than for broadcast,” often at higher resolutions, and developments there, such as wireless systems for drone-based industrial monitoring systems, will feed back into broadcast production.

Before making their predictions, a lot of what the panel discussed were trends that are becoming ingrained in our lives so quickly that they are no longer predictions, they’re here:

Mobility - “will be built in to everything” (whether for consumption, production or even remote management).

Quality - “Nobody should think that because we’ve got more video than ever before that the quality is declining - what it actually means is that the competition is increasing and quality keeps coming to the top, whether it’s picture quality, sound quality or relevance” - in terms of “context-driven content: being there first with the right kind of content for a given audience.”

Security - which has moved from being any other business in board meetings to top of the agenda due to the impact of cyber attacks on the media. Harrison was recently told by the US department of Homeland Security that “the media sector is the number one sector under attack by cyber criminals.”

Speed to market - for new services and tools, and also for content. “There is an opportunity cost around being slow.” It is “becoming massively challenging” for bigger broadcasters and suppliers to achieve the agility they now need.

Live and near live production - its increasing popularity is placing huge demands on manufacturers and cloud services to provide the speed of delivery necessary.

As for the predictions themselves, they were:

More content: The amount of video there is will “have a profound change on our business” and for many big manufacturers, such as Adobe, Canon and Vizrt, the non-broadcast sector is at least as important as broadcast. Any TV company that sees its business solely as television “will almost certainly be losing out on a lot of opportunity,” said Harrison.

Versioning: Typically there are about 400 versions created from a reasonably successful Hollywood movie, and about 100 versions of a high-quality successful TV show, and an online company like Buzzfeed continually tweaks its content to maximise its popularity, which is why Harrison said that a new standard (Broadcast IMF - Interoperable Mastering Format) to make this easier is getting a lot of traction. It gives “the ability to create a master which is a bit like an à la carte menu, from which you can then automatically generate any number of versions without having to go and create bespoke individual ones.” 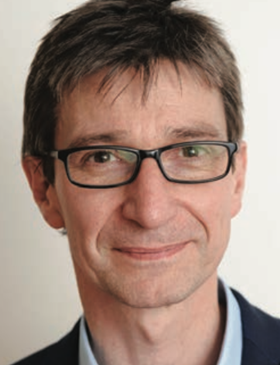 VR/AR: “The hysteria, the distraction. The bubble has already burst,” because “we got overexcited by a really important, but immature, technology.” It has to improve in quality and mobility before it gets mass adoption, and then immersive technology will be most important for gaming and experiences, as well as education and training. It might even be useful for news and current affairs, “to help you understand and empathise with an environment, but there is currently no evidence that we are seeing any real storytelling in this space, so as far as what we call television is concerned, you actually don’t need to bother too much about immersive technology in the next two years.”

Content aggregation: “Nobody wants to have to go to separate interfaces to find linear and non-linear content on their device, but particularly on their television.” Hardly anyone likes their smart TV interface, “because they are proprietary and they are absolutely hideous.” Searching is particularly difficult, but once we do have search-driven systems (probably using voice input), the importance of getting amongst the first few search results will be such that content providers will have to do deals to ensure their shows are prominent, and whoever controls the search engine will become a potentially powerful content aggregator, as if by stealth.

New business models: The notion that a company needs to have offices and fixed infrastructure around the globe is disappearing. Cloud-based working, and also a need to move from fixed costs to operational costs, such as shared workspaces and outsourcing to the cloud, will prevail.

Automation and machine learning: “The primary cost in most businesses is still people, and at a time when most organisations are struggling with their overheads they will be looking to take people out, so where there are activities that are repetitive, which need to be accurate, but prone to human error, expect to see them getting automated; particularly things like the movement of media through a chain, ingest, QC, transport.”

Connectivity: As an industry we want to move to connected and cloud-based services, but “unless you are a company of scale in a fixed place, in a fixed city, you will find connectivity challenging, especially if you’re a production and you work out in the field, you will find it horrible.” Despite this, “the debate about cloud is over,” he stated. “It is going to be how the media industry functions, and in about two years time that will feel established and real,” but in the meantime most companies are dealing with how to get ready for this. It “isn’t just a technical thing. Very often it is about their business model,” building a revenue model that allows you to survive.

The DPP asked its panel to weight the impact each of these will have on the industry over the next two years, and getting cloud ready came first (scoring 83), followed by new content aggregators (67), changing business models (60), automation (50), connectivity (40), versioning (38), more content (28), and immersive (18).