How full-frame sensors are changing the lens market

What does the popularity of large format sensor digital cinema cameras mean for the lens market? David Fox reports.

In electronics, the rule is almost always: smaller is better… except when it comes to image sensors. Of course, smaller sensors mean smaller cameras, which are usually good, but larger sensors capture more light, which is even better, especially for anyone shooting at Ultra HD or higher resolutions, particularly with high dynamic range. 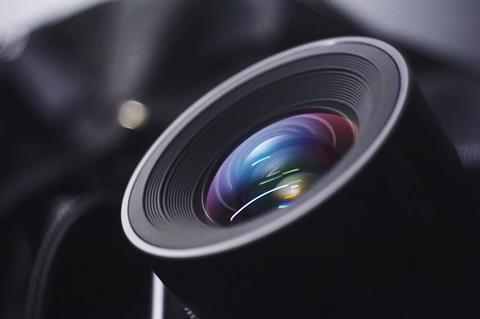 This is why cinematographers have been so excited by the recent slew of large format sensor digital cinema cameras, such as Arri’s Alexa LF or Sony’s Venice.

The main attractions of full-frame sensors are: “increased resolution, more control of depth of field, and the ability to use quality stills lenses” from all the old 35mm film cameras, according to Mike Tapa, director, MTF Services.

This is why it isn’t just high-end digital cinema cameras going large. The new Nikon Z and Canon R compact mirrorless cameras are also full frame, and MTF showed the world’s first third-party adaptors for the Nikon Z at IBC2018. “The PL adaptor for the Nikon Z in particular is something that has created a lot of interest with many people wanting to try out this combination as soon as they are available,” says Tapa.

The problem, however, is what goes in front of this sensor.

A lot of DoPs and rental houses have invested in high-quality lenses made for Super 35mm film and digital cameras. Indeed, one of the most significant trends in lenses over the past few years has been a rush to buy vintage glass (such as Cooke Panchros or Bausch & Lomb Super Baltars), or to rehouse old stills lenses in cine bodies, because they gave character to the clean, rather characterless images produced by digital sensors.

All this investment is at risk.

Many hire companies are saying they no longer want to invest in S35 lenses, although True Lens Services’ head of engineering and design, Gavin Whitehurst, says: “I don’t think S35 will go away. It will always be there.” But he feels full-frame lenses may become standard for digital cinema cameras, being driven by the likes of Netflix wanting all deliverables in 4K, for which larger format sensors are a more natural fit.

Of course, there are many new lenses coming out that will suit full-frame cameras, some from new entrants to the lens market, such as NiSi or Spirit Lab Optics, but many of these are still some way from shipping.

Character driven
So where does this leave all those older lenses, and what are the new alternatives? 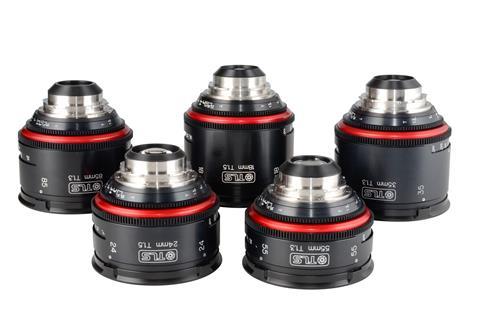 People are “desperate for coverage for these [larger] formats” as there is a limited choice of new full-frame lenses, where Whitehurst says Cooke’s S7s are proving popular. TLS offers three full-frame zoom lenses of its own (14-24, 24-70 and 80-200mm T2.8) based around Nikon glass. However, availability of most new lenses is constrained – as it is for older lenses, where prices are rising.

“Canon K35s were already popular, but because they can cover full frame, and a lot of old Canon lenses don’t, that has pushed the price up,” says Whitehurst. Indeed, such is the demand for rehoused K35 lenses (cine lenses from the 1970s originally built with now outdated BNCR mounts) that TLS is now talking about a year-long wait for any new orders.

These rehoused lenses offer iris and focus with 300º of rotation, on a cam-driven system that slows down towards the infinity end, with auto backlash so there’s no play on the focus and a greater spread of numbers, so it is easier for the focus puller.

But, because the prices of K35s are “going crazy”, TLS also now offers rehousing for Leica R lenses, from the 80s and 90s, to get them up to cine standards. These are good stills lenses that cover full frame sensors and are proving popular. There is also a lot of demand, says Whitehurst, for Canon FD stills lenses and increasingly for lenses from old medium format cameras.

An alternative for anyone with existing Super 35mm lenses is to get an adapter, such as the new Duclos 1.7x Expander, which increases the image circle of the lens to cover the larger sensor. While it does promise to maintain its image quality it also results in 1.5 stops reduction in light. However, given that the larger format cameras usually have good low-light performance, this shouldn’t be too much of a problem.

Fujinon also has a new 1.7x expander developed with Musashi Optical Systems, designed to ensure that the Fujinon look is not affected and that the same colour rendition, clarity and contrast is maintained. The OptMag TL-OMFF adaptor expands the image from Fujinon’s Premier and Cabrio PL-Mount Super-35 lenses onto a 46.3mm diagonal image size without vignetting. It is claimed not to change the angular field of view of the lens from the Super35 sensor to full-frame (because narrowing is mitigated by the increase in sensor size), but there is a 1.5 stop reduction in light transmittance.

In prime position
There are quite a few new lenses entering the market, some of which are re-workings of old designs. 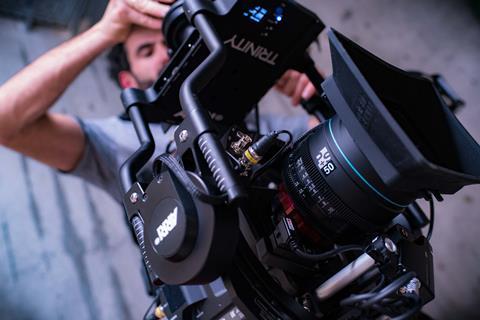 P+S Technik offers a modern version of the classic Technovision anamorphic lenses, which are designed to cover larger sensor cameras. It includes five primes (40, 50, 75, 100 and 135mm) plus two zooms (35-70mm/T3.2 and 70-200mm/T3.5). The Technovision Classic 1.5X series come standard with a PL mount, with options for other mounts (such as Canon EF, Sony E or Micro Four-Thirds) using P+S Technik’s Interchangeable Mount System.

It also makes a range of Evolution 2X primes based on the original optical design of rare vintage Kowa Anamorphics, including two newly-released lenses that weren’t in the original Kowa range: a 32 and a 135mm, both designed to match the look of the original 40, 50, 75 and 100mm lenses. They are built in a compact, lightweight housing with modern cam driven internal focus mechanics. The focus throw has changed significantly compared to the originals, offering a 200° angle on the focus ring and 100° on the aperture ring. The mod 0.8 gear rings are in the same position throughout the set. P+S Technik also rehouses older lenses, including K35 and FD models.

Spirit Lab Optics is a new company that has developed a range of cine primes designed to cover all full-frame sensors in the market, and more, thanks to their image circle of 50mm.

It hopes to offer high-end quality at mid-range prices, and the lenses are claimed to offer very high resolution, resolving 200 line pairs all across the image circle, so they should work with 16K sensors.

Although NiSi is best known for its filters, it has now entered the lens market with the new F3 full-frame primes. The initial line up is: 25mm/T2.1, and 35, 50, 75 and 100mm (all T2.0). There will also be an 18mm. They all have the same 270º focus rotation and 12 iris blades for “a soft and beautiful bokeh”. They come with PL, Canon EF or Sony E mounts – user swappable. The optical coating on the lenses is claimed to control dispersion perfectly while retaining rich details, resulting in “stylised flare and contrast enhancement”. 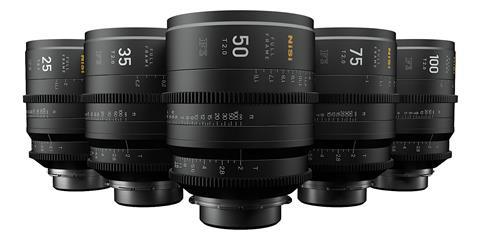 Canon’s fast Cinema Prime lenses and its high-end L-series both work with full frame sensors. Using the L-series with its C700 FF gives full auto-focus compatibility with the camera’s Dual Pixel CMOS AF sensors, making it simple to track a moving subject. The camera is available in both EF and PL mounts, meaning users can opt for the generally lower-cost EF lenses (of which there are a huge number on the market).

It now also has seven Cinema Primes (from 14 to 135mm), each with an 11 blade iris to produce round bokeh and soft, pleasing lens flares. The EF mount version allows them to communicate directly with the C700 (or C200/C300 MkII) for ambient light and chromatic aberration correction, metadata, T-stop, and Dual Pixel focus guide. 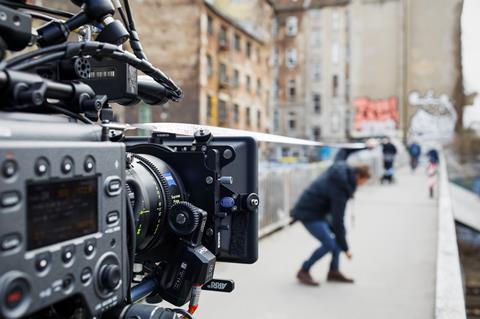 The new Zeiss Supreme Primes are 13 high-speed lenses (most with a maximum aperture of T1.5) that cover focal lengths between 15mm and 200mm. They are claimed to be lighter and smaller than comparable lenses, and also boast “a gentle sharpness”, an aesthetic focus fall-off and elegant bokeh.

They include Zeiss’s eXtended Data metadata technology for frame-by-frame data on lens vignetting and distortion in addition to the standard lens metadata provided using Cooke’s /i Technology protocol, which should assist visual effects houses to remove the lens properties while adding computer-generated effects – and then reapply them to create a realistic image.

They will use a 1.8 squeeze, which Les Zellan, chairman, Cooke Optics, believes “gives the best results for full frame anamorphic. At 2x you would lose too many pixels, and at 1.6x (the correct ratio to use every pixel) you will not get enough of the anamorphic character. Our solution at 1.8x gives the image a greater anamorphic feel at the aspect ratio of 2.40:1 whilst capturing 90% of the pixels, therefore keeping this format well within industry resolution standards. However, because these are Full Frame Plus lenses designed to cover the full still frame of 24x36, you can elect to use 100% of the pixels which will result in an aspect ratio of 2.70:1.”