There’s a huge amount of change taking place in the audio business, driven by the move towards immersive sound. Nowhere was this clearer than at this year’s IBC, where plenty of new modern mics and other innovative audio production kit were on display. Mark Hallinger rounds up the best audio action from the show.

At IBC2018 the 2020 Summer Olympic Games from Tokyo were on the near-term radar. Japan’s NHK has announced plans to launch its Super Hi-Vision satellite broadcasting in December 2018, with full scale delivery targeted for the hometown 2020 Olympics. 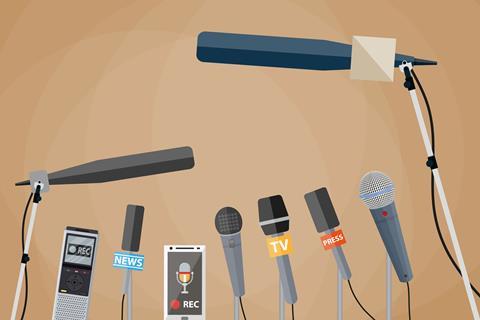 A big display in the Future Zone showed off the stunning 4K and 8K ultra-high definition images the system provides. And the sound is keeping up with the vision: it fully envelops the consumer with 3D 5.1 channel sound for the 4K version, and an amazing 22.2 channels of sound for the 8K experience.

The immersive audio that the 2020 Tokyo Olympics will provide were part of many conversations on the show floor, along with Next Generation Audio (NGA) and all that this entails.

Beyond the massive, elephant-in-the-room general industry trend to AoIP, the move to immersive and its higher channel counts along with NGA is driving product roadmaps and facility planning.

Sprinkled in were developments in traditional audio acquisition tech including increasingly professional mics for non-traditional devices such as phones and DSLRs, and a few specialty mics aimed at the emerging world of AR/VR acquisition.

There’s change afoot, arguably more on the audio side than we’ve seen since 5.1 shook up the industry years ago.

“The move to immersive and its higher channel counts along with NGA is driving product roadmaps and facility planning.”

Increased channels: Here we go again
Immersive audio and the equipment required to help a production deal with all the channels needed was a trend at IBC2018.

For its part, Genelec used IBC as the European launch for its new high-SPL two-way monitor and subwoofer. These were showcased working as part of a 7.1.4 system with immersive material, and were deemed appropriate for demanding applications including large immersive setups in post-production studios.

The company also welcomed guest Engineer and Producer Bernard Löhr from Benny Andersson’s studios in Stockholm at an event. He shared his experiences mixing the music for the Mamma Mia! Here We Go Again movie in immersive.

Calrec also made a significant announcement related to dealing with both IP infrastructure and immersive needs. Its new Impulse core next-gen audio processing platform provides customers with a fully defined upgrade path as they transfer to IP infrastructures, and it provides 3D immersive path widths and panning for NGA applications.

Relying on higher order ambisonics (HOA) technology, the Spatial Audio Toolbox plug-ins from b<>com provide a complete workflow from capture to rendering on headphones or in multi-loudspeaker set ups.

b<>com also played a role – along with the IRT, BBC, France Télévisions, and the EBU Technology & Innovation department – in the EBU ADM Renderer (EAR) for NGA, which won this year’s EBU Technology & Innovation Award. Audio renderers such as the EAR receive and interpret NGA content, which is designed to deliver highly adaptable audio for immersive, more personalised experiences and access services, to a receiver.

NGA technology will be capable of giving users a more immersive and personalised listening experience, and a greater choice of services. To make this possible, the broadcaster transmits a combination of sound and metadata about where it should appear to come from in the room to the listener. An NGA receiver translates (‘renders’) the sound elements needed for the arrangement of loudspeakers in the viewing room, or to generate an appropriate headphone mix.

“There’s arguably more change afoot in the audio business than we’ve seen since 5.1 shook up the industry years ago. “

Tip of the spear
No matter how many channels of audio a production requires or how next-gen the audio needs to be, mics will always be at the tip of the acquisition spear.

VR/AR maintained a respectable presence at the show and an appropriate level of buzz, and a few products for acquiring audio for these applications popped up. One of the higher profile acquisition products for this emerging world came from Zoom Corp., which used IBC to show a product that makes the complex process of capturing audio for VR a bit simpler.

Zoom’s new H3-VR virtual reality audio recorder is the only recorder that can capture and decode spatial audio in one device, said Zoom. The unit features a 4-capsule Ambisonics mic and onboard A/B decoder, allowing it to capture 4 channels of spatial audio, which can then be automatically converted to be compatible with 360-video.

The H3-VR can also record stereo files in binaural mode, providing a hyper-realistic spacial recording for filmmakers, videographers and musicians looking to add more depth to their sound. A 6-axis motion sensor provides the H3-VR with auto mic position and level detection, so however the mic is positioned from scene to scene, the 360-audio and video orientations will stay aligned. 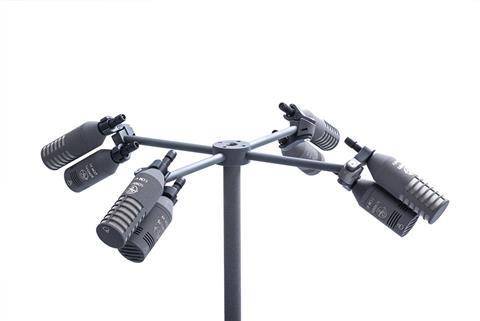 Sennheiser (and Neumann) used IBC2018 to show the workflow of binaural recording and processing, including their top 3D audio recording products. Sennheiser partner Dear Reality showed software that enables users to mix VR in VR for the first time, according to Sennheiser.

SCHOEPS was ready with some new technology for 3D audio. Its ORTF-3D indoor setup will meet customer requirements for a version without a windshield, said the company.

Australian pro audio vendor RØDE Microphones, located on the HHB stand at IBC, announced that the SoundField by RØDE NT-SF1 360° Surround Ambisonic Microphone was shipping. SoundField pioneered 360° surround-with-height audio capture way back in 1978, and was acquired by The Freedman Group, home of RØDE, in 2016. The NT-SF1 – announced in April – marks the first collaboration between the two established brands. It includes free software that allows users to reshape their audio.

Engineering advances and continued micro-sizing are a timeless trend. DPA Microphones had a bit of both going on. Its new CORE amplifier technology promises to lower overall distortion and expand dynamic range, ensuring a very clear sound. The company had its new d:screet CORE 6060 and 6061 Subminiature Microphones and the d:fine CORE 6066 Subminiature Headset Microphone at IBC. These have capsules that are just three millimetres in diameter, two millimetres smaller than DPA’s existing 4000 series of miniature microphone products. 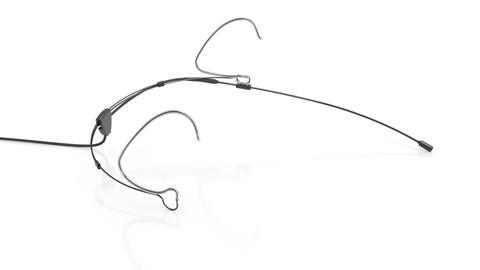 Chopping size: The new d:screet Subminiature mics have capsules that are just three millimetres in diameter 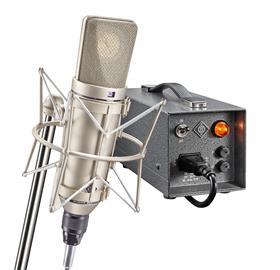 Smooth tube: The Neumann U 67 from the 1960s was recently reissued

Even more traditional, Neumann reissued its famous U 67 tube microphone. The company said the U 67 was much loved for its smooth sound and extraordinary versatility when it was the ‘quintessential’ studio workhorse mic throughout the 1960s, the formative years of modern music. Built to original specs, the U 67 comes in a vintage case, complete with an elastic suspension, a microphone cable and a redesigned power supply.

Smart(phone) capture
Somewhat less traditional but quite important to the modern journalist or modern budget production is audio captured with smartphones, which can be great tools even if the phone’s built-in mic is not always sufficient.

Sennheiser used IBC2018 to show its wireless Memory Mic for smartphones. This small, lightweight wireless microphone offers broadcast-quality sound. Benefits include audio pick-up in broadcast quality via a free app, one-touch synchronization of audio and video, no issues at all with range, an audio mixer in the app, and four hours of operating time. 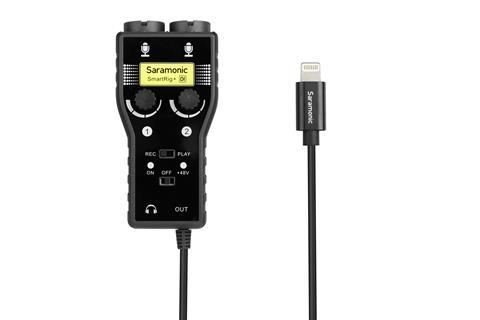 Mic and guitar interface: The SmartRig connects iOS devices to any type of mic and many instruments

Debuting at IBC was a new two channel mic and guitar interface with a Lightning Connector for iOS Devices. The Saramonic SmartRig+ Di allows a user to connect professional microphones/guitars to iPhones, iPads and iPod touch devices for the recording of stereo sound.

AV-Leader from Taiwan showed its AVL773 stereo camera mount microphone designed for use with any of today’s DSLR or mobile video cameras with a standard 1/8-inch stereo mic input. It features an integrated low frequency roll-off switch that offers increased intelligibility and reduced handling noise in loud environments and when the camera is recording in motion.

The sporting life
In the IBC Future Zone, Sennheiser and Lawo teamed to demonstrate what the future holds for football sound. The manufacturers presented a new Sennheiser microphone array technology, which is able to put a highly directional focus on the relevant sounds on the soccer pitch – for example, ball sounds and referee or players’ comments. The array is combined with Lawo Kick, software that works with camera tracking to locate the ball and control the directivity of the microphone array accordingly. 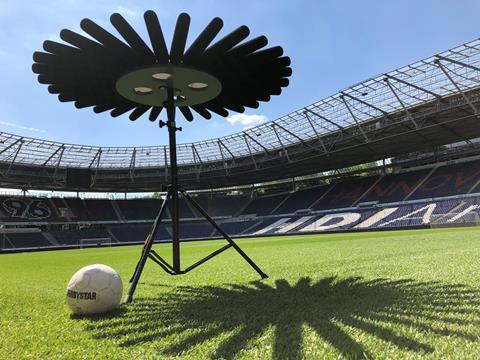 One audio acquisition vendor that hopes to start a trend in Europe is Klover Technologies. While its compressed air device to blow raindrops off an outdoor lens with a quick button push was an easily-missed-but-quite-useful piece of kit, the company is also hoping to see parabolic microphones become more common in European sports coverage. Its line captures sound from great distances by using the physics of a parabolic collector to focus sound from a large area onto a small microphone. While its larger parabola can capture conversations from 180 metres away, its small 23cm model is small enough to mount directly to a video camera, and provides performance that is equal or better than a high-end shotgun micro-phone, said Klover.