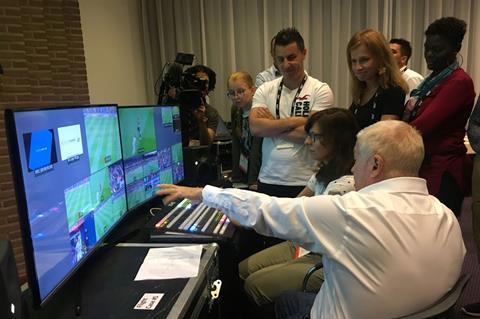 HBS Broadcast Academy has launched Project Access, a cross-industry initiative that aims to improve opportunities for women to enter and advance in sports broadcasting.

Project Access aims to bring onboard more industry partners to develop a larger network upon which to position opportunities for further progress across different regions and at other major sporting events.

Project Access builds on HBS Broadcast Academy’s foundation in establishing a push towards greater gender equality in the broadcasting industry.

One of its key pillars, the Broadcast Academy in partnership with EVS, worked with the first women football directors in Cameroon, Jamaica, Iceland and Austria. It has held dedicated sessions for women professionals at the IBC Show in Amsterdam since 2017.

In 2019, Aleksandra Fedina, director from Saint Petersburg, Russia, won an all-inclusive ‘shadowing opportunity’ at Roland-Garros in Paris this summer, thanks to the co-operation of the FFT.

While at IBC2019 Vera Bicher - a graduate of the HBS Broadcast Academy - won the inaugural IBC Young Pioneer Award for her dedicated work as the first female football director at ORF in Austria.

“Working with IMG, EFL and FFT to already deliver tangible opportunities is a great start for the initiative and will hopefully inspire others to get involved as well.”

Miodownik acknowledged the “clear advancements” taken by its Academy graduates during the course of 2019, however, the firm wants to increase the success stories by encouraging wider involvement across the broadcast industry.

He added: “The more organisations who are on board with this initiative and helping us to create a platform for talented women in the industry, the faster we will reach the goal of a more equal workforce.”

Project Access has been launched with the aim to take the next step for industry diversity and inclusivity.

The initiative approaches the challenge of women who are under-represented across the broadcast industry from three angles. They are:

- Greater access to training. Scholarships and bursaries will allow for selected participants – either from the industry partners own personnel or independent applicants – to attend industry-led training sessions.

- Exceptional candidates identified will be given access to opportunities to work on, or shadow at, major sports events with participating partners, and will be offered longer-term mentorship from experts.

- With focus on the next generation wishing to break into the industry, workshops and talks at media universities and broadcast conventions will open the door to a new audience, with hands-on experience available via the EVS Live TV Simulator and positive reinforcement of the career stories of women broadcast professionals, including those who have graduated from Broadcast Academy courses.

“Programmes like this are crucial to ensuring women are well-positioned to shape the future of sports broadcasting, benefitting both the sports themselves and their fans. This has our full backing.”

The initiative aims to allow an outlet for industry partners to guide upcoming talent in their organisation and offer an avenue for participants recommended by all partners to progress further after their training sessions have been completed.

FFT director of media and production Emilie Montané said: “We are delighted to play our part in Project Access.

“Whether it is through providing content for the training courses or by offering real-world experience to those who have shown their talent, everything we can do to give opportunities that would not normally be easily accessible to women in the industry is an encouraging step forward.”