Inside Huawei’s AI and cloud-based strategy

Huawei’s involvement in the rollout of 5G infrastructure has dominated recent headlines, but it is AI and cloud that represent key avenues of future growth for the firm, writes Paolo Pescatore.

Huawei held its 16th global analyst summit in Shenzhen last week, with the annual gathering well- timed given the ongoing geo-political and security concerns that have engulfed the company. 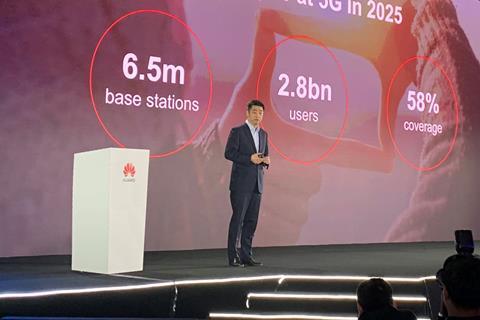 This year’s event felt somewhat different to previous occasions, with a greater focus on new areas such as moving down the stack into semiconductors and innovation rather than focusing solely on 5G.

A common theme throughout the two day event, which began with a keynote delivered by Ken Hu, the company’s deputy chairman, was intelligent connectivity.

Hu outlined his vision that “the intelligent world is coming” in which physical input has been eliminated. According to Hu, there will be no remote, no buttons and no dials and all information will be delivered to the user before they search.

Huawei is well positioned to realise this vision, thanks largely to its relentless drive in R&D. Every year the company invests more in R&D culminating with more than CNY101 billion spent in 2018, which equates to around 14% of revenues. Unsurprisingly, the main areas of focus are 5G, AI and the cloud.

2018 was a fruitful and eventful year for @Huawei says Ken Hu, Deputy Chairman #HAS2019 pic.twitter.com/3oRbeddask

During the event, Huawei presented its bold cloud strategy powered by AI. The company believes its investment in AI will allow it to differentiate its Huawei Cloud offering from rival propositions. Fundamentally, the integration of AI makes its cloud offering more intelligent. It is expanding its computing capabilities in all areas to provide a comprehensive full stack innovation from chipsets to datacentres. Also, its R&D seeks to break technology boundaries even further by redefining computing to storage to networking architecture. It predicts that 97% per cent of big enterprises will use AI, and 77 per cent of apps will use the cloud by 2025.

During the keynote sessions, the company cited the following proof points to growth in its cloud business:

The cloud landscape remains challenging given the established presence among the tech and web giants, including Alibaba, Amazon, Google and Microsoft all jostling for position.

Despite this, Huawei has bold aspirations in this area which started two years ago. Interestingly, the company is placing greater focus on the enterprise segment. This is a new target audience for the company which is currently served by telcos (the segment it targets with 5G connectivity).

“The cloud landscape remains challenging given the established presence among the tech and web giants, including Alibaba, Amazon, Google and Microsoft all jostling for position.”

Huawei cannot solely focus on price or execution given the approaches adopted by existing and well established providers. The move to 5G enables new use cases and lowers the cost of delivering data services to very specific, 5G-related market sectors. This in turn should open up new opportunities for specific verticals such as the media and broadcast industries. If successful, it would further cement its position in the value chain.

At the event, Huawei reinforced its 5G position with 40 signed commercial contracts and shipped 70,000 base stations, compared with the more than 30 contracts and 40,000 base stations it cited at end-February. The company also provided a geographical split; of the new total, 23 contracts in Europe, six in Asia-Pacific, 10 in the Middle East and one in Africa (with the notable exception of the US, which continues to warn its allies against working with Huawei citing security concerns). In all, it expects to have shipped 100,000 5G base stations by May.

Something that will resonate with telcos is Huawei’s latest fully converged solution for 2G, 3G, 4G, 5G non-standalone (NSA), and 5G SA core networks. Huawei claims to be the only vendor that can offer this software upgrade solution without changing any hardware. Further underlining its network leadership, the company also claims to be the first provider to support end-to-end network slicing thanks to numerous telco trials (for services like 4K live broadcasts, artificial reality gaming, and connected vehicles).

Hu addressed the elephant in the room by suggesting that all in the industry should take an open approach to security.

“We need a more systematic, all-industry, full-society approach to build trust, and that includes establishing the standards for cybersecurity for all industries,” he said.

We believe trust is based upon facts claims Hu #HAS2019 pic.twitter.com/5v063NeWrC

Hu went on to reiterate the belief that Huawei believes in an evidence and fact-based approach and applauded the approach taken by the EU. On cybersecurity, Hu said that “it is less a political issue than a technical one, which is why frameworks are required.”

This latest summit suggests that the big bets placed on AI and the cloud are starting to pay off, and it was refreshing to hear about such bold plans for the future while rivals continue to struggle to drive innovation.

However, Huawei cannot rest on its laurels. The company needs to continue its charm offensive in order to regain trust and credibility among its key target audiences, especially enterprises. For now it has gained a strong leadership position in 5G but has some ground to make up in other areas such as the cloud compared to Alibaba, AWS and Tencent. New players on the block such as Rakuten with its all-cloud mobile network will also be a force to be reckoned with.

No doubt Huawei can execute on proving its offering against enterprise priorities. This coupled with its AI capabilities puts it in a strong competitive position. However, gaining trust could well be its biggest obstacle.