A year into a transformation project, SMPTE casts its eyes on the future

The industry is going through a transformation, and so is SMPTE. A year into the 100+ year old Society’s major project, executive director Barbara Lange sits down with James Pearce to discuss its plans.

As the media industry continues to transform and evolve, the industry bodies which help to shape and guide it are doing the same. 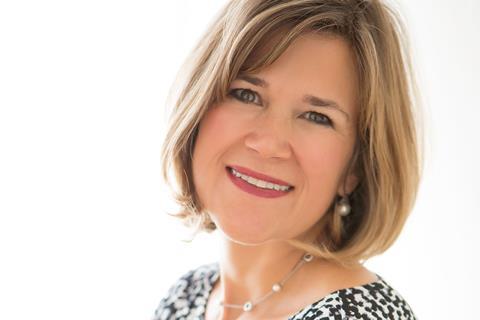 For the Society of Motion Picture and TV Engineers (SMPTE), transforming an organisation that dates back over a century is no easy task, but it is now a year into a three-year strategic business plan which sets out who SMPTE is and where it wants to go.

When IBC365 sat down with SMPTE executive director Barbara Lange at the Society’s SMPTE 2019 conference in Los Angeles, the beginnings of those changes were evident. From handing attendees a pair of sunglasses to deal with the Californian sun, to an entire day dedicated to space exploration, SMPTE 2019 was unlike any SMPTE conference before it.

Lange explains that the leadership team at SMPTE had approached the conference as a “reimagination”. It is the second year the event has been held in Downtown LA, moving from its traditional home nearer to Hollywood.

“Last year when we came [to the Westin Bonavere in Downtown LA], moving downtown was a bit of a shock to the system,” says Lange. “So we decided to take the opportunity to jazz up the event, to make it young and fresh, and to try and change the perception of this simply being an old fashioned, ageing group.”

I ask if this is part of SMPTE’s overall overhaul – a move away from being seen, like so many engineering organisations, as one made up primarily of older men.

“We’re looking at how to change that picture.” Lange replies. “We’re looking at early career sessions, and partnering with other groups on that.” Partnerships, adds Lange, make up an important part of the SMPTE strategy. But more on that later.

Changes to the conference are just the “first steps”, she adds. With the wider shift, “everything is on the table” with the board fully behind Lange.

“I think that’s good. The industry has changed and I think SMPTE has to change and the board is very, very supportive of it. We’re competing with people in Silicon Valley [to attract the next generation of talent] so we need them to know that SMPTE has a good heritage and a strong legacy of technical excellent.

“We need to change to be attractive to them - that’s going to be our next move. This is the first step in that direction for sure.”

She points to an example outside of the broadcast and media sector for an example of a legacy organisation that has revamped its image successfully.

“Burberry was one [example] of honouring the legacy of that rich hundred and 50 years of existence. But knowing that you have to turn and look forward and adjust accordingly.”

“We’ll learn from others who’ve done this successfully. And we’re excited about it. The team is very, very excited to get into it and understand what is involved.” 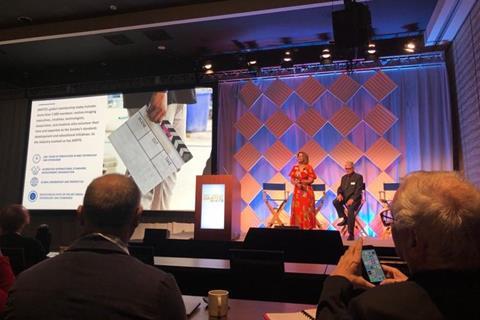 The big question is what this will actually mean for SMPTE’s membership, which includes more than 7,000 members: motion-imaging executives, creatives, technologists, researchers, and students who volunteer their time and expertise to the Society’s standards development and educational initiatives.

Lange recognises the need for SMPTE to make itself more accessible to people beyond the deep engineers it has traditionally catered for, but without losing what makes the Society unique and of value to those members.

“There’s a small community of those people and if we want to survive into the future, we need to be accessible to a broader audience,” she explains. One focus is attracting more millennials through early career programmes that look at driving younger people with an interest in engineering through mentoring.

Another, which was introduced for the first time at SMPTE 2019, is Storytellers. At the event, these took the form of Ted Talk-style sessions where an individual would tell the audience about their experiences in the industry. Speakers included millennial Yvonne Thomas, strategic technologist at the Digital TV Group who spoke about being a female, millennial engineer in the industry.

Another storyteller was Jeffrey Shapiro, who is executive director at not-for-profit studio Exceptional Minds. Exceptional Minds is a professional training academy and studio for visual effects artists and animators with autism. Shapiro spoke about some of the stories of VFX artists who have graduated from the firm’s training academy on gone on to work on a number of massive projects, such as Marvel’s Black Panther.

“We wanted to do Ted like talks,” says Lange, “the short talks about yourself and how you got into this industry. So your story can inspire somebody else - we felt that we we wanted that to be another piece of accessibility content.”

At it’s core, SMPTE is “about the people” she adds. “As the people evolve, we evolve with it. And that means that we may offer different kinds of programming because there’s more generalists out there, and they might need to learn a little bit more about specifics.”

What’s important, she explains, is that SMPTE as an organisation is serving its members.

Partnerships for the future

AS the industry evolves, SMPTE is working not just with its members, but also with other organisations, to tackle the pace of change.

At SMPTE 2019, the Society announced key partnerships and agreements which, according to Lange, will help SMPTE to reach into areas where it has less of a presence.

Lange says: “The idea with partnerships is that we there’s no way we’re going to be everywhere. So let’s partner with people who are in other parts of the world where we can bring our expertise.”

During her keynote at the annual event Lange announced a new agreement with the IABM. She also revealed partnership agreements with ConnectTechAsia in Singapore and the Media Production and Technology Show in London.

The partnership with the IABM – which along with SMPTE is one of six organisations that own IBC – will take the form of a knowledge exchange.

“This will be an effort where IABM’s strength is in business knowledge and research while we bring expertise in the technology and we think that’s a good crossover that can add great value to the community,” she tells IBC365.

On ConnectTechAsia she adds: “We went this year and discussed with the organisers all the important work SMPTE is doing, and we’ve now signed a formal agreement that we will present a SMPTE track at that programme. We’re very excited to be able to bring our knowledge to that community.”

Despite all of the transformation plans, SMPTE will at its core remain a place for sharing knowledge and developing solutions to common problems in the industry, most notably through standards.

At SMPTE 2019, one of the key areas of focus was SMPTE 2110, a standard that describes how to send digital video over an IP network. The standard differs from previous IP video standards in that video is transmitted in uncompressed format and audio, video and ancillary data are carried as separate streams

“It’s very, very popular right now,” says Lange. “A lot of new facilities are being built with that.”

The members of SMPTE most care about image quality, she explains, no matter if that’s using traditional hardware or the cloud.

“Yes, we want to make sure that our industry is ready for any kind of big shifts, and that we do our part in education and things like that to make sure that the people who migrate in this are transitioning in this world, have a place to go and enter quick,” adds Lange.

“But at the end of the day, what SMPTE cares about is the quality and evolution of motion imaging. That can be anywhere.”

She means literally anywhere – including space. The final day of SMPTE 2019 was dedicated towards broadcasting images from space, in recognition of the 50-year anniversary of the Apollo 11 space mission. This included talks from documentary maker Todd Douglas Miller, who earlier this year released Apollo 11 using unseen footage from the mission; and a conversation with astronaut Terry Virts.

It also included a surprise live video feed with astronauts on the International Space Station thanks to NASA and AWS – much to the delight of the SMPTE 2019 crowd.

The “anywhere” is why SMPTE opted to focus on space, with Lange adding the Society wanted to look at “the issues that are involved with transmitting images out into space, [how that] affects the quality, that motion image.”

“It’s good that the industry is evolving,” concludes Lange, “and our role is to make sure that the quality image no matter where it ends up is it’s good as it was meant to be.”

That, she admits, is a big job.