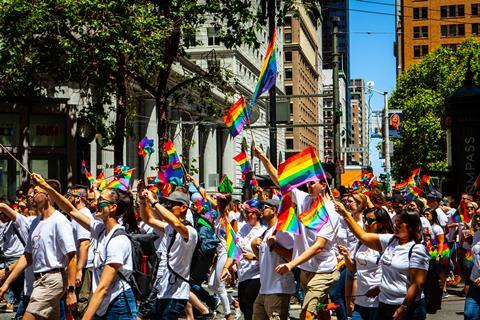 Many media technology companies are still too straight and male and should follow the example of broadcasters such as Channel 4, by setting up corporate LGBT networking groups to encourage diversity.

That was the verdict of a Lounge Talk IBC Conference panel, ‘Flying the Rainbow Flag’, which argued that diversity across the industry was patchy at best.

Visibility of LGBT is still very low in technology companies, said Angus Wyatt, commercial partnerships executive at UK broadcaster Channel 4 and chair of its award-winning 4Pride LGBT and employee networking group. “I see many more out LGBT people on the creative side of the industry but not on the tech side. Maybe those companies are not so open. Maybe they are not out. It’s still a very straight, male dominated world.”

Puiseux-Kakpo, who manages corporate social responsibility at TF1, said that French free-to-air network had made great strides in recent years on LGBT representation, highlighted by the high profile of gay TF1 presenter Christophe Beaugrand. “I would like him to be cloned because I want more people to be openly gay and speaking about the issue on TF1.”

Wyatt added despite C4 enjoying a reputation for “representing the under-represented”, featuring the UK’s first pre-watershed lesbian kiss in soap opera Brookside in 1994 and broadcasting ground-breaking gay drama Queer as Folk in 1999, 4Pride was still necessary.

“The difficulty at C4 is internal complacency,” he said. “The external appearance and image of the company is quite different to the lived experience in the company. Young LGBT people imagine it’s a good place to work but when you get here you realise that it’s not as inclusive as it should be.”

The panel agreed that digital media companies such as Facebook, Google and Netflix were leading the way with LGBT representation, because of their younger talent and younger workforces which were more attuned to LGBT issues. “It’s clear that they are considerably more diverse, compared to traditional media companies,’ said Wyatt.

The panel was chaired by Robert Ambrose, managing consultant at High Green Media.