JB Perrette is totally changing the look and feel of Discovery Networks International.

Ten years ago Discovery was a world-renowned broadcaster of factual programming with award-winning documentaries spread over a typical 10 channel bouquet and active in some 220 markets. 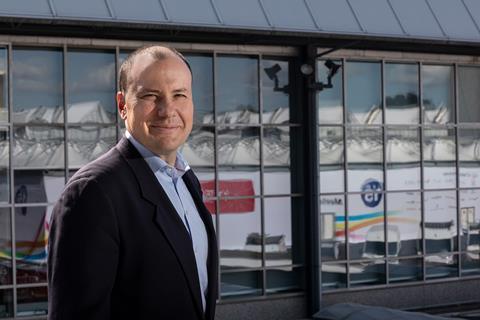 Jean-Briac (JB) Perrette, who joined DNI in October 2011 as chief digital officer, has over the past few years helped change that paradigm. He was promoted to run the international business in January 2014.

His boss, David Zaslav summed up Perrette’s appointment in an interview at the time, saying: “JB has it all. A strong strategic vision, operational expertise and exceptional team-building skills.”

Those words came about in the same week that Discovery announced its plans to increase its existing 20% stake in Eurosport to 51%. That stake became 100% ownership in July 2015. Since then the acquisitions and developments have come about thick and fast, and Perrette and his team have expanded the Discovery portfolio of assets at an impressive clip.

The changes have taken DNI from that single channel founded by John Hendricks in 1985 (Hendricks retired from Discovery’s board in 2014) to today’s portfolio of well over 100 channels – and in 50 languages. Discovery is, by any measure, the world’s largest provider of factual programming (8,000 hours of original programming annually) and it is difficult to see any rival catching that sort of penetration.

The broadcaster is also justifiably praised for backing new innovations. Indeed, it was a pioneer in the HDTV space with its Discovery HD Theatre (June 2002), and in a 2012 joint-venture with Sony and IMAX, a 3D TV channel (3net). That didn’t quite work out, but through no fault of the broadcasters. Now Discovery is investing into 4K/Ultra HD and in high dynamic range. Few doubt a 4K Discovery channel will emerge when the time – and the market - is right.

It is tough to describe which of Discovery’s major purchases or investments can best be described as ‘the big one’, but in June 2015 Discovery acquired the pan-European broadcast rights to the Olympic Games for the period 2018-2024 (excluding Russia) in a massive $1.3 billion deal that also included commitments to create a year-around Olympics Channel.

But then Discovery topped even that when it acquired Scripps Networks Interactive (for $14.6 billion. The deal closed in March 2018) and which adds significantly to the company’s channel count around the world. Scripps’ brands (Fine Living, Food Network, HGTV, Travel Ch., Cooking Ch., DIY Network, Great American Country, etc.) help secure growth and eyeballs around the world.

JB praised Scripps’ “treasure trove” of content and said that acquiring the channels was a “huge windfall” for DNI and that his team’s task now was to see the acquired channels expand to new markets beyond the US, UK and Italy.

While traditionally Discovery has focused on cable and pay-TV channels, over the past few years that policy has been modified and DNI now has plenty of free-to-view channels operating around the world.

JB, speaking in India in July expressed his enthusiasm for DNI’s activity in the country: “We obviously see the growth prospects of this market and would like to be on a much bigger scale in India. We love this market. When you look at the next several decades, India is clearly a global driver and so the market holds a lot of appeal and we would like to continue to find ways to be bigger in this market. We’re constantly going to be placing bets and that’s consistent.”

But he had wisely also cautioned delegates attending a media event in Bali in April, saying that Discovery was prepared for the occasional misstep as well as the successes. “Not everything is going to work,” he admitted. “But we are not afraid of that because it is experimentation and the trials and swings which are needed to succeed in a world that is changing as fast as it is. We spent a half-billion dollars investing in the Oprah Winfrey Network. For the first three years it went nowhere. Now it is the leading Afro-Caribbean network for women in the US and is hugely profitable.”

Over the top
The broadcaster is also actively working in the OTT space, under its own brand and, for example, with a joint venture with Germany’s free-to-air broadcasting giant ProSiebenSat.1 Media (Pro7/Sat1), and which JB said represented the “next evolution in the re-invention of television. We think there’s room for a strong local OTT service and we think that’s true in Germany and eventually we think that’s true in every market,” he added.

On June 4 it announced it would be investing $2 billion to mop up the international (non-US) TV rights for golf’s ‘blue chip’ PGA Tour from 2019 to 2030. Discovery said it intends to monetise the rights through a combination of sublicensing, advertising, affiliate and digital subscription revenues. The amount of the rights payments will increase over time, as additional rights in new countries become available. The estimated rights costs are approximately $50 million per year in 2019 and 2020, $100 million in 2021 and then ramping up through 2030.

All this activity ends up being reflected in the revenue column of the broadcaster’s accounts, and while the USA domestic division is doing very well (up 42% for Q1/2018) it is Perrette’s ‘international’ division that is now making waves with revenues up (quarter-on-quarter) 47% for the first-quarter of 2018, to an impressive $1.098 billion. Discovery Inc. overall revenues for 2017 were $6.87 billion (up from 2016 $6.497 billion), and with 2018 prospects looking very healthy.

And Discovery can stay firmly on message. For example, the Thai mine rescue of the 12 youngsters and their football coach: within hours Discovery had commissioned a ‘fast track’ film crew from ITN to produce a special documentary. The rescue completed on July 10th. The special aired July 13th. Opportunistic? Absolutely. But also thrilling and providing detailed information to a global audience hungry for more.