Paramount on Personalisation, FAST and the ad value chain

Addressing the interplay between subscription-based services and frictionless, FAST content consumption, Robert Gelick revealed that: “On the subscription side, (Paramount+), is hyper personalised. A lot of that has to do with people opting in because they understand the value. And that translates into what they want to watch at their fingertips, and a level of discoverability in the content space that really allows people to get the most out of that subscription.

“In the FAST space,” Gelick continued, “[access] is frictionless. You can come in and start watching, but people do choose personalisation features that can be done locally on a specific device without requiring registration. But as the behaviours get more complicated on the FAST channels, where you’re using a connected TV or a set top box, you’re also using your phone, also your favourites, those convenience elements don’t appear [on all devices]. You have to really figure out the right approach for doing something like favourites or pause and resume watching, like these things that are becoming kind of core tenants of streaming.

“We haven’t solved all those problems- no one in this space has. You have to respect how people want to treat their privacy and when registration enables that new level of personalization - that will vary market by market. I do think that continuity of experience is really what drives consent.”

Linear vs FAST - room for both

Paramount is home to the AVOD service Pluto TV, which offers multiple FAST channels. These range from channels devoted to a specific franchise, like the SpongeBob SquarePants FAST service to curated genre channels, focused on themes such as true crime. 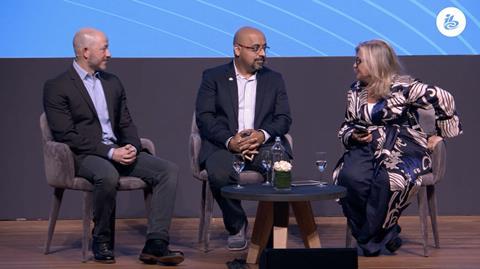 “Pluto TV at the time of launch was a contrarian service. People thought linear as a format is going away,” said Gelick. “Clearly, it is not and the FAST market has proven that people still like this lean back viewing paradigm. And that’s where we’ve seen a lot of success. It’s balanced with other things that streaming brings, which is broad VOD catalogues that [viewers] can consume.”

Pluto TV, Gelick said, has over 1,000 channels around the world that are programmed by its editorial teams, and it has aggregated over 380,000 hours of content to build the Pluto TV service. However, the value of consumer data is still considerable, and needs to be factored into the FAST business model.

“I think, across the board, media companies have realised the value of consumer data,” Gelick explained, “and if you have that direct relationship, then the question is: are you able to actually build an organisation and build a product portfolio and an operational model to take advantage of that? To have that full feedback loop [for] both commercialisation as well as content planning [is valuable]. But if part of your business model is syndication, then this is the trade off - part of the negotiation has to be [around] the sharing of data…”

Anil Jain, Managing Director of Media & Entertainment, Google Cloud also gave his thoughts on the future direction of personalisation: “What I think the evidence in the industry has shown us is that consumers will tell you what’s working. I think Paramount has done a brilliant job of creating that mix of experiences that consumers are demonstrating are in fact very attractive to them, which is leading to this entire trend of FAST in the last couple of years. I think the next kind of evolution of this is really going to be about enhancing personalisation, enhancing discovery in search, and increasingly [going on] that journey, that vision to the holy grail of true ‘one-to-one’ personalisation.”

Interestingly, both Gelick and Jain agreed that one of the biggest challenges of FAST is getting the advertising part of the equation right. Operating on a global scale and at a dynamic pace - as Gelick explained, thanks to detailed analytics of user preferences, new FAST channels can be spun up “basically overnight” - but that speed creates issues of its own.

“We have a huge team dedicated to making sure that we’re operating in a compliant manner,” Gelick said. “That’s one of the biggest challenges, frankly, of operating on a global scale - making sure you know how to do that in a responsible way, in every market. And so we make it a priority.

“We’re structured so there’s always a direct path to monetisation - the ad markets are very mature in most places that we are operating. Figuring out what the right way to approach that inventory may vary based on whether we’re in a partnership where using our direct sales teams or we’re working with a partner on the programmatic side.

“I think the one area that Pluto TV really shines in is the balance of direct sales, either from an internal team or a third party, to a team that has access to your inventory balance with programmatic and figuring out how to do that in a way that respects all the advertiser rules in terms of placement and frequency, as well as respects the consumer rules that we need to operate [within].”

Jain agreed, but concluded that the advertising market as a whole needed to step up.

“I think there’s a lot of innovation that’s possible. But the provocative piece I’ll say is I think that the reason we haven’t seen a lot or more of this come to light is that the entire ad value chain is actually quite antiquated, and resistant to change - there’s a lot of inertia.

“So, I think that there is an opportunity to do much better and actually, it will be good for consumers, good for advertisers, and good for the media organisations who provide that experience, in terms of revenue generation.”

The pair were speaking at an IBC2022 session titled ‘Transitioning Linear and VOD and Introducing the Simplicity of FAST’, Moderated by Nathalie Lethbridge, Founder and Managing Director of Atonik Digital. For more content from the IBC2022 Show check out the latest IBC2022 video and the full coverage on 365.