In consciously opting against a hybrid solution for its new broadcast centre, German sports producer Plazamedia has created a modern, future-proof system as SMPTE 2110 approaches.

The importance of IP to all aspects of media can hardly be understated. The transition is not new when looked at in broad terms: ‘Black Box,’ dedicated machines started to be replaced in earnest a generation or more ago and file-based production has become the norm for many. 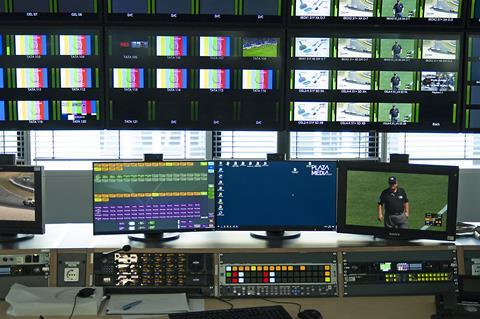 That being said, there have been and continue to be ‘islands,’ of IP within SDI facilities, and vice-versa, in corners of the industry.

At IBC2018, it could be argued that IP and AoIP had made a big leap from concept or trial applications, to being very real for many end users. Many are now going beyond just ‘dipping a toe in’ via a partial facility conversion, with facilities and OB vehicle designs really starting to push beyond proofs-of-concept or partial measures.

Jürgen Konrad, the Senior Project Engineer and IP Solution Architect for Plazamedia, said this was all in keeping with the overall goal of designing flexible, fast and very efficient production and distribution of content. Flexibility and scalability are key, with the facility design allowing the company to offer a significantly higher number of concurrent projects, even with minimal notice.

“We definitely decided we wanted to make a big change from the old infrastructure and also the old way of production,” said Konrad. “We wanted to move away from having any static assignment of resources tied to a particular room … this required full flexibility regarding the hardware including the mixing consoles, EVS seats, graphics machines and so on.”

The whole project started about 18 months ago with a global investigation on how to make the environment more efficient. Plazamedia’s decision to move ahead with its own design was taken in the autumn of 2017. The first equipment was ordered in February 2018, which was followed by a configuration phase and integration that hit its peak in late April. sonoVTS did the integration, and the facility went on air August 11, on schedule and in time for broadcasting the 2018/19 Bundisliga season.

Konrad likes to differentiate between workspace and infrastructure virtualisation: “With complete workspace virtualization you can enter any workspace and choose what it will be … perhaps an EVS operator, a graphics operator, a playout operator or a sound mixing operator.

“This is accompanied with the infrastructure virtualization … these two allow us to swap resources and swap workspaces. We now have rooms that can change their functionality, they don’t have a specific function … there are base resources, but most can be dynamically associated and assigned.”

“We definitely decided we wanted to make a big change from the old infrastructure and also the old way of production.” Jürgen Konrad, Plazamedia

The fundamentals
The broader Plazamedia environment that interacts with the broadcast centre includes a significant amount of EVS servers, Vizrt machines, post suites and studios. The core of the broadcast centre itself is a multi-vendor —- largely dual vendor —- infrastructure design that is in many ways a unique approach to moving forward. Its core is a hardware layer based on a network orchestration solution from Nevion, and on top of that Plazamedia has placed a sophisticated configuration based on Lawo’s VSM broadcast control solution. VSM allows user interfaces and control panels to be freely configured within the fully redundant system so they can serve a variety of application areas and workflows. 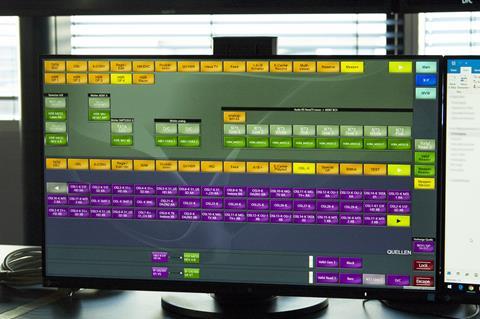 There is an intense interaction between the person who goes in to a room for a certain task, and the control system, and what happens on the network side, said Konrad. “Our use case allows us to map every signal to every operator position,” said Konrad. “(With) a cascaded hybrid solution, significant tieline management would have been needed (which) typically creates a resource overhead. With IP, this is no headache.”

Konrad said that the combination of Nevion and Lawo kit sees Nevion handling about 1/3 of the traffic, including conversion between SDI and IP at the entry and exit points. Plazamedia opted for a spine-leaf, fully redundant, software-defined network (SDN), with Nevion eMerge as leaf switches, Nevion Virtuoso software-defined media nodes as SDI/IP gateways for video, audio and data, and Nevion VideoIPath as the orchestration and SDN control software. The spine switches are provided by Nevion partner Mellanox.

“The Nevions have a live clean switching functionality in the Virtuosos,” said Konrad. “They can make sure that as we cut off one stream the next stream is established within the next video frame. We can really do a video switching operation that is seamless without any signal loss on the output side and so clean that we use it for all our transition cuts, and when we do any failover or live switching this is happening on the network side.”

Lawo equipment is involved in about a further 1/3 of system traffic in streaming applications, and the remaining third is also Lawo for IP multiviewers. “These are C100 software-defined processing blades with no BNCs connected, the multiviewing is just a network resource.” 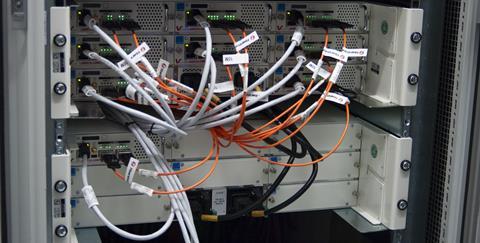 Beyond this kit Plazamedia decided to use Wohler iAM Audio1 units for monitoring everything audio related in one unit. “The flexibility of our MCR operations is proven by the fact that our network supports Network Address Translating (NATing),” said Konrad. “So without any change in the SFPs, we can easily stream any audio for quick monitoring. As we also have some classic signals in that environment, we could easily include these as well.”

“With complete workspace virtualization you can enter any workspace and choose what it will be … perhaps an EVS operator, a graphics operator, a playout operator or a sound mixing operator.” Jürgen Konrad, Plazamedia

Obvious AoIP benefits, and 2110-ready
AoIP has certainly reached the point where it is being deployed in real situations that allow for far greater efficiencies and simpler designs. Of particular note to Konrad is the simple ability to get rid of the massive amount of processing devices like audio embedders/deembedders that had been required before. “In the old days you had to decide whether to go with a full embedded video environment or discrete audio breaking everything down to a massive audio router,” said Konrad. “Now of course this limitation is gone … now you choose a stream format or multiple stream formats and every video device that is supporting that is generating not only a video stream but also a dedicated separate audio stream … now an IP video and audio environment is just one flat layer.” 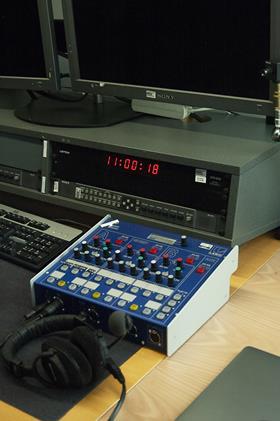 Some challenges remain for AoIP, said Konrad. One example is Dolby E: “The Surround format definitely needs AES 3 support, it means uncompressed stereo audio otherwise you can’t transmit because it is an encoded signal. Transmitting encoded signals on IP is just not quite where it has to be … the standards are defined but the support is not yet there.”

Konrad said that when Plazamedia made its decisions on this project, it was clear that SMPTE 2110 was quite complex and would not be ready for the opening date of the broadcast centre, so they went the safe way with SMPTE 2022 on the video side, plus separate SMPTE2111-30 compliant AES67 streams, all in /7.

“We set everything up the way it will have to be for 2110, stepped back a bit, and brought the system to life in a way that when the time is right with UHD, I hope that 2110 will be ready as well,” said Konrad.

He’s also seeing the need for some mono equivalent seamless, noiseless audio routing. “In streaming audio over the network, I’m not seeing a seamless solution. In new formats coming up, UHD1, HDR or not, that’s where I think 2110 will be the right tool for managing the whole infrastructure.”