How can businesses and academia successfully navigate a world being transformed by tech? That was the theme of the National Centre for Universities & Business’ (NCUB) Annual Lecture – delivered this year by Sky COO and CFO Andrew Griffith.

“There are far more points of similarity between us than points of difference.” So said Sky COO and CFO Andrew Griffith in his opening remarks at the NCUB’s Annual Lecture this month, seeking to emphasise the parallels between the worlds of academia and the media. 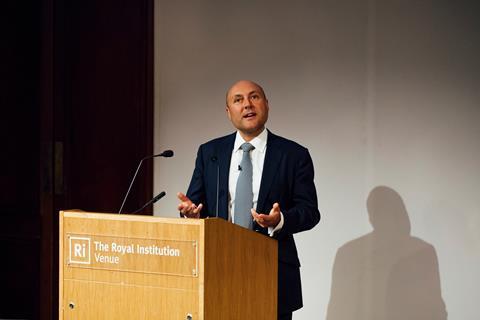 “We are both large employers, and we depend on engaging people, both students and viewers, and we need them to pay attention at a time of ever shortening attention spans.”

Griffith noted that universities and media companies like Sky are all navigating a world that is fast changing thanks to technology.

“We are now called TMT – technology, media and telecoms – and the level of change is rapid and transformational. It is literally ripping up the industry and re-assembling the bits,” said Griffith.

“Some things fade away, but we see so much more created. Take news - the best performing traditional newspaper saw a fall in circulation of 4% year on year, and most titles saw double digit falls. But news is not disappearing, it is shifting,” he added. “It is on your phone, and it is reaching many more people than before.”

Griffith then turned to the decline of traditional broadcasting. He said: “In 2011 there were 678 programmes that averaged over eight million viewers, but last year that number was 201. Conversely on demand viewing is rocketing; viewing of services like Netflix and BBC iPlayer have increased four-fold.

“Half of the Sky Go viewing by 16-24 year-olds is now on demand,” he added. “That is a huge amount of control shifting from the broadcaster to the viewer, and that is mostly a good thing. One of the next big transformations that we are seeing now is voice: things like Amazon Echo and Google Home are growing faster in their rate of penetration than the smart phone at the same point in development.”

Griffith also referred to a startling IBM stat saying that 90% of the data ever created came into existence this decade.

This is impacting on the business environment in which corporations operate. Griffith noted that company lifespans used to run into six decades at least. “Today that has fallen below 20 years, and Sky is a case in point. Just before our 20-year anniversary as a listed company we have been taken over (by Comcast), which is another example of the forces changing industries,” he said.

“One of Sky’s early successes was televising cricket played in the middle of the night and live. Before that you could only listen on the wireless: you couldn’t have pictures from Australia. That technology was open to anybody, but it happened to be used by Sky.” Andrew Griffith, Sky

Moving onto the technological forces at play, he said: “I am sceptical about some of the claims made about the number of professions that will be destroyed by AI. We have heard things like this many times before.”

He also flagged up the need for tech companies to be taxed fairly. “What happens when the basic tenets of society like regulation and taxes are treated as entirely optional by a handful of global companies that control so much of the technology that we all use to communicate? We have to figure this stuff out.”

Griffith moved onto the questions that technical change raise for the leaders of business and academia. He said the one power they have is deciding what to do about it. Sky, he noted, was built on the idea of challenging the status quo. “We were one of the original disruptors, and we believed consumers wanted and would pay for greater choice in TV. Before Sky TV meant four channels,” he said.

Sky, he added, did not make money for five years.

“With hindsight success seemed pre-ordained, but we took some significant risks,” said Griffith. “I remember more than one Friday in finance we sat down behind a mound of bills and made two piles – those we could afford to pay that week, and those that had to wait for next week.

“Because you can do something increasingly doesn’t mean you should do it. A lot of these industries that have grown up in spaces that are unregulated mean we as a society need to decide where the parameters lie.” Andrew Griffith, Sky

“What helped us through that challenge in the beginning was that none of the big players were even trying to do what we were doing. Instead the incumbents tried to hold the line,” he added.

“I know how hard it is to marry a desire to preserve tradition with the needs for the future, particularly if the future is not certain,” said Griffith. “One of the biggest barriers for leaders is fear, not personal fear of losing our jobs but a kind of professional fear of actively tearing down the past for an uncertain future. That is a big and bold trade off to make.

“Often people see their organisation defined by a particular type of activity, and do not want to lose that golden thread. That is what happened to Kodak,” he added. “They did not have the vision to see that they were not in the film chemicals business, they were in the picture business! Many others filled the gap that they occupied.”