IBC2017: SMPTE has announced at IBC the approval of the first standards within SMPTE ST 2110, the standards suite for carrying content over internet protocol (IP). 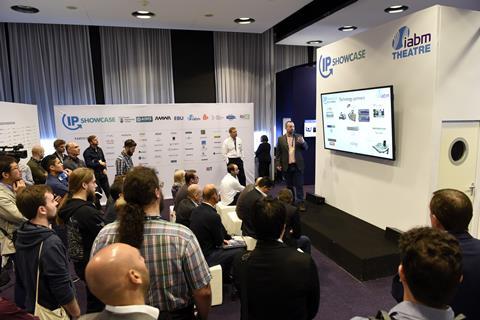 The Professional Media Over Managed IP Networks standards suite specifies the carriage, synchronisation and description of separate elementary essence streams over professional IP networks in real-time for the purposes of live production, playout and other professional media applications.

“Radically altering the way professional media streams can be handled, processed and transmitted, SMPTE ST 2110 standards go beyond the replacement of SDI with IP to support the creation of an entirely new set of applications that leverage information technology (IT) protocols and infrastructure,” said SMPTE President Matthew Goldman, senior vice president of technology, TV and media, at Ericsson.

“Our Drafting Group worked diligently to complete the first documents of this critical standards suite.

“The formal standardisation of the SMPTE ST 2110 documents enables a broad range of media technology suppliers to move forward with manufacturing and meet the industry’s high demand for interoperable equipment based on the new suite of standards.”

The IP Showcase features the latest advances in IP technology for the professional media industries and demonstrates how SMPTE ST 2110 standards add value. Numerous interoperability demonstrations assist broadcast/IT engineers, CEOs, producers, and others in understanding how they can leverage the benefits of ST 2110 standards.

According to SMPTE, with the ST 2110 standards, intra-facility traffic now can be all-IP, which means that organisations can rely on one common data centre infrastructure rather than two separate facilities for SDI and IP switching/routing.

The foundation for the first SMPTE ST 2110 standards came from Video Services Forum (VSF) Technical Recommendation for Transport of Uncompressed Elementary Stream Media Over IP (TR-03), which VSF agreed to make available to SMPTE as a contribution toward the new suite of standards.

SMPTE ST 2110 standards make it possible to separately route and break away the essence streams — audio, video, and ancillary data.

This advance simplifies, for example, the addition of captions, subtitles, and Teletext, as well as tasks such as the processing of multiple audio languages and types.

Each essence flow may be routed separately and brought together again at the endpoint. Each of the component flows — audio, video, and ancillary data (there may be multiple streams of each type) — are synchronised, so the essence streams are co-timed to one another while remaining independent.