Trends and tech developments of video - in and outside the home

The mobile video phenomenon continues to grow as user demand for content and consumption surges.

Video is the biggest driver of traffic on today’s mobile and WiFi networks, with mobile video streaming on the move growing along with consumer demand for content and accessibility.

Cartesian’s mobile video survey of 370 industry professionals from developed and developing countries ranked smartphones second as the primary way to consume video in the home, with television screens unsurprisingly listed as the top content consumption device inside the home.

Across developed and developing countries, 82% agreed smartphone video consumption inside the home would increase over the next five years, with no notable change in television habits.

Smartphone video consumption trends on the move reflected the consumption inside the home, with on-demand TV shows and movies being the most popular content streamed. 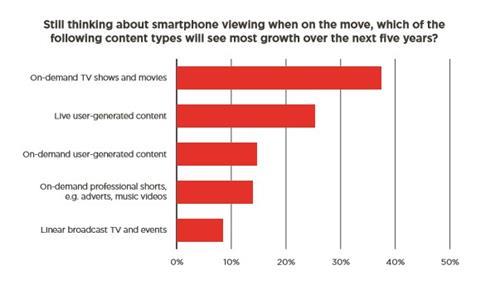 As technology advances the demands from users challenge the viewing experience with 67% stating smartphones as “uncomfortable to hold for a long time” as the top reason why they were used less for watching video inside the home.

Coming in second with 63% was the “audio and video experience”, followed the preference of watching video as a group and “device storage limits”; highlighting the trend of streaming content, over downloading.

Jean-Marc Racine, Senior Vice President at Cartesian, said, “There is clearly an appetite for increasing the role smartphones play in consuming video both inside and outside the home. Across the ecosystem, players are looking to operators to take the lead in growing this opportunity. We are seeing operators employing strategies to improve their networks and enhance mobile video. The winners will be the ones who offer the market the best deal first.”

Battery life, network storage and data rates were highlighted as the barriers of streaming video on-demand outside of the home; smartphones has transformed the way content is consumed, and how it is accessible for the users.

Ericsson stated in its ‘Mobility Report ’, mobile video will grow by approximately 50% annually through to 2022, accounting for close to 75% of all mobile data traffic.

“Video can be considered both a burden and an opportunity for the operator. The US is leading the way with operators investing in video convergence through acquisition, such as AT&T buying DirecTV and Verizon acquiring in AOL and Yahoo. We believe more European operators will launch zero rating services, following the popularity of services that provide free video streaming such as T-Mobile US’s Binge On service. But operators need to take a considered approach as zero-rating video comes under scrutiny under certain net neutrality principles,” Racine said.

The future of mobile video consumption holds huge value both in and outside of the home and consumer usage and demands will prove invaluable to industry developments.