The journey to the cloud

IBC2017: Is anything possible now in the cloud? For vendors the possibilities are limitless, for broadcasters it’s only a matter of time. 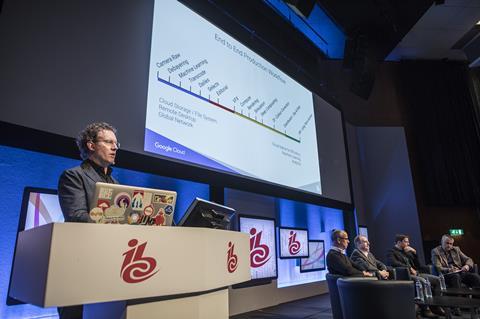 How far can the cloud go?

In the Friday morning session Cloud: How far Can it Go? Google Cloud’s Chief Technology Officer Jeff Kember said that Google has invested $30bn in its infrastructure and hardware and software stack to make heavy duty tasks such as rendering, simulation and compositing possible.

He added that 80% of the Disney’s The Jungle Book was rendered in Google’s Cloud last autumn enabling VFX house MPC and teams located elsewhere in the world to carry out quick renders.

“You can now do shots in parallel. The scalability is there, instead of saying we have a fixed amount of compute on premises you can work on it per frame to save on artist, director and producer time,”said Kember.

Kember also unveiled some new machine learning features at IBC that Google has dropped into a number of places along its cloud pipeline.

“Our goal is not to replace the editor but to make the process more efficient,” he added.

For broadcasters interested in creating and pushing out 360 content, Kember added that content captured on its Jump camera can be directly uploaded into the cloud where it can be scheduled, stitched and distributed to customer’s own channels, its client’s channels or directly to it video network.

While the IABM revealed in its IBC End-User survey that around one quarter of broadcast companies have virtualised their businesses, fellow panelist Tom Griffiths, Director of Broadcast and Distribution Technology at ITV, said that the UK broadcaster would not be doing a whole scale uplift into the cloud.

“In an ideal world there would be nothing on premises but it’s a journey and different parts of our business are at different points in that journey,” he said, adding that there were legacy systems to be replaced and workflows that needed to be re-architected.

He added that live production was further away than on demand publishing, which is now all running on cloud - and that the true benefits were not necessarily cost driven but the transformation of businesses in a “fundamentally different way”.