Most stories about new broadcast facilities are all about beautiful buildings designed by ‘starchitects’ featuring soaring atriums and state-of-the-art studios and production systems. This is not one of them. This is the story of tin-roofed, mudbrick buildings with no air-conditioning, and brand new, old-fashioned analogue production kit.

The Radio Community (TRC) is an expanding network of local radio stations in the Republic of South Sudan, supported by Internews. 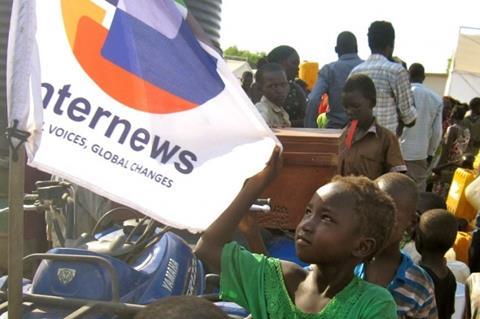 This is a not for profit media organisation that works with citizens and local media in more than 100 countries to support the development of thousands of media outlets worldwide, including radio and television stations, newspapers, mobile news networks, and online news sites.

According to the company, the four radio stations that make up The Radio Community reach an estimated 2.1 million potential listeners.

In 2015, after seven years of operation, it was decided that the TRC stations were due for a refresh. Two of the stations had been destroyed in the decades-long conflict in the country, and were considered too dangerous to return to, so the project focused on the four remaining stations.

When it was determined that the local engineers didn’t have the skills to build a new faculty, Internews turned to the audio consultant, Rupert Brun, a former Head of Technology for BBC Radio.

The ambition was to create a studio design that was reliable, consumed a small amount of power, and was easy to fix with minimal maintenance.

Delivering this brief would be a serious challenge, according to Brun. South Sudan has no infrastructure – there is no power grid even in the capital. The stations run on diesel generators, and fuel can be difficult to obtain. Additionally, there was no standard design for the stations, making them difficult to support.

The proper level of support is also an issue due to lack of education as a result of the conflict. Further complicating this is the lack of roads in the country. To get to a station, an engineer must hitch a ride on a helicopter with an aid organisation, and often have to wait a week for another helicopter in order to return home.

Brun travelled to South Sudan on a 10-day fact-finding mission in order to develop a proposal for a new studio design. It was also an opportunity for both Brun and Internews to see if he could actually work under the conditions to be found in the country – no toilets, no clean water, 40-degree heat, and living in a tent. “I’m not someone who wilts in the heat,” says Brun. “I found I could work under those conditions. And, having been to lots of motorbike rallies, I was used to lack of facilities and living in simple shelters.”

‘You can give people windup and solar powered radios and set up community radio stations and all of a sudden people have access to a lot of information. It’s been transformational’ - Rupert Brun, Audio Consultant

Developing the specification
“Engineers are the same the world over,” says Brun. “The engineers in South Sudan wanted the latest, shiny, digital studios. It took some time to convince everyone that was not a good idea. When digital systems fail, they fail completely, and they cannot be repaired on site – things have to be swapped out and sent back to the manufacturers for repair. Sending and receiving items in South Sudan can take months.”

One of the biggest challenges was developing systems that could support the editorial demands of the region. The existing systems could not put more than one phone call on air at a time. This was a particular problem as most audience interaction and interviews with guests are done over mobile phones because it’s physically impossible to reach the stations to conduct interviews in person.

These demands drove the design in the direction of analogue. “With an analogue mixer, someone with a box of parts and a soldering iron has a fighting chance to fix it,” says Brun. “Also, the prices are low. You can get several analogue mixers for the price of a single digital mixer.”

That decided, the next problem arose – how to find an analogue mixer that could get several calls on the air and was small. According to Brun, this simply didn’t exist. “They were either too big or not didn’t have enough capability” he says. “There is a real business opportunity for a company to serve the community radio market.”

In the end, he came up with a hybrid analogue/digital studio design based on the Allen & Heath XB 14/2 mixer, the Telox HX6 telephone hybrid, and Myriad for playout. The Allen & Heath mixer was a real find, and it only cost £$877. Each of the four stations was designed with two studios – an on-air studio and a production studio, each kitted out with the same desk.

“The design was possibly over-specified for the production studio,” says Brun. “But it can function as a spare on-air studio.”

With the technology infrastructure sorted, it was time to turn to the physical architecture of the facilities. The original stations were small, square brick buildings with corrugated tin roofs.

“A building with a tin roof is a disaster,” says Brun. “They get hot and they are loud when it rains. We did the sensible thing and turned to local expertise – we’ve covered the tin roofs with a thatch made of reeds, just like the local buildings.”

Another significant change from the original stations is a move to renewable energy. “TRC has gained funding for solar power, and the stations are now being converted from diesel power,” says Brun. “Because the stations are designed to be energy efficient, they can easily be powered by the panels. The break-even point on panels after comes after five years and they will last another 10 to 15 years. Thanks to solar power, the stations can stay on the air longer, because sometimes it’s hard to get diesel.”

Lifeline on air
Brun is firm about the importance of community radio to the people of South Sudan “Because the country has been at war for so long, there are millions of displaced people,” he says. 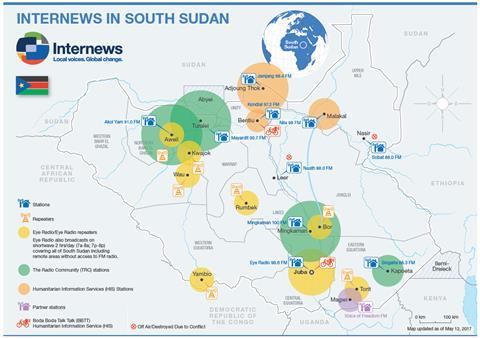 “You can give people windup and solar powered radios and set up community radio stations and all of a sudden people have access to a lot of information. It’s been transformational,” he continues.

“By airing interviews, you give people a voice. You give them a sense of what the leaders stand for and what they are doing; the broadcasting of information from the leaders had a calming effect on some of the violence.

”Additionally, there has been healthcare campaigns and social campaigns to encourage people to allow their daughters to finish their education before they are married off.”

Overcoming setbacks
The design was signed off and the project was confirmed, but then came a huge upsurge of violence in South Sudan with an attack on Internews compound – people were raped, and a journalist was murdered. Internews pulled out of South Sudan.

“I realised they still needed the stations,” says Brun, “and I had to figure out a way to get them to them.”

He developed a plan to build everything in the UK, bring the engineers to the UK to train them in the installation, and then ship the technology to South Sudan. Internews liked the idea very much.

Brun got a contract in September, for delivery of first two stations in November. “Essentially I had only two and a half months to put it out to tender, design, and build it,” he says. “We managed to do it. Broadcast Radio in Hull got the job to do the build. I designed a training course involving lots of pictures – in order not to have to rely on English speakers.

‘When digital systems fail, they fail completely, and they cannot be repaired on site – things have to be swapped out and sent back to the manufacturers for repair. Sending and receiving items in South Sudan can take months’- Rupert Brun, Audio Consultant

On the road
“On a cold day in November, I collected two engineers at the airport,” says Brun. “I had to show up with loads of warm clothes because they couldn’t buy them in South Sudan. On the way to the factory, the engineers expressed surprised that the tarmac ran all the way to Hull, because that was so unlike their experience from home.

“They were trained at the factory on how to assemble the studios. They flew back, got the kit, assembled the stations, and they are now on the air,” continues Brun. “Three of the four stations that remain the air have been converted. The fourth is ready, and there is a fifth setup in the capital that’s used for training and spares.”

Brun singles out Steven Lemmy, TRC’s Chief Engineer for high praise. “He took on a huge amount of personal development and training in this project,” he says. “If you’re coming from a background like that and are an engineer - you’ve got to be pretty good, and good at solving problems. This project has exposed TRC’s engineers to the breath of techniques and skills of engineers around the world. They no longer need me – they know what they’re doing.”