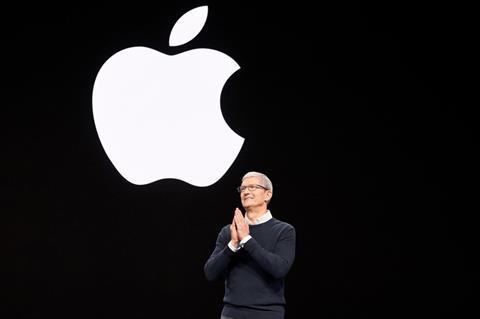 Apple chief executive Tim Cook is confident consumers will choose Apple’s TV+ streaming service ahead of the multitude of other OTT services in a move to diversify its revenue income.

Speaking with investors Cook said: “There is a huge move from cable bundle to over-the-top (OTT).”

Apple TV+ will join the likes of Netflix and Amazon Prime with its subscription streaming service set to launch this autumn.

Cook said: “We think that most users are going to get multiple OTT products and we are going to do our best to convince them that the Apple TV+ product should be one of them.”

The service will have original content from Steven Spielberg, Oprah Winfrey, Steve Carrell and Reese Witherspoon and has been billed by Apple as “the new home for the world’s most creative storytellers.”

Ahead of its launch, Apple will roll out its new Apple TV app this month, that will bring together user access to the service via iPhone, iPad, Apple TV, Mac, smart TVs and other streaming devices.

The Apple TV channels will also be available for Apple TV users to access broadcasters including HBO, Showtime and Starz on the service.

While, Apple announced its iPhone sales had dropped 17% in its first quarter, Cook explained he is optimistic its streaming service will counter the decline for shareholders.

According to Reuters, investors are keeping a close eye on Apple’s TV offering to ensure the financials remain competitive with the impact of less iPhone sales.

Apple plans to spend $2 billion on programming however has remained tight lipped on the consumer cost of the platform.

Overall, Apple announced its services revenue reached a new all-time high of $11.5 billion with its quarterly revenue reaching $58 billion a 5% decline from the year-ago quarter.

Cook said: “We delivered our strongest iPad growth in six years, and we are as excited as ever about our pipeline of innovative hardware, software and services.

The crowded market is getting busier this year with Disney+, BritBox and Apple set to go live by the end of 2019, joining the already active players which include Netflix, Amazon Prime and Comcast’s Flex.