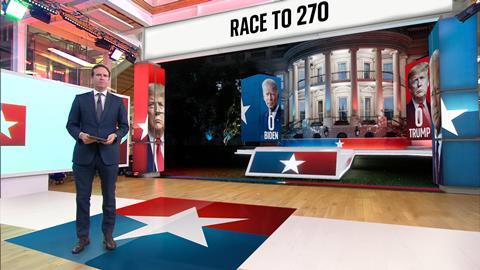 Trump vs Biden: Covering the 2020 US election

In the first part of an election special, James Pearce looks at what plans major broadcasters have outlined for their election coverage.

Major elections offer an opportunity for broadcasters and news organisations to demonstrate why they play a vital role in a democracy.

According to figures from Nielsen, 71 million Americans watched the results pour in as Donald Trump beat Hillary Clinton in the 2016 US Presidential Election – just shy of record viewing figures that had seen Barack Obama take the White House in 2008.

Read more US election: How mail-in voting and Covid-19 have impacted news coverage

On Tuesday, Americans return to the polls to vote between Trump and former vice president Joe Biden, bringing to a close a race that has lasted the best part of two years.

But the 2020 race – already seen as a hugely important election due to the partisan divide in American politics – has been made even more challenging because of unique circumstances of holding a major election during a pandemic.

For broadcasters, coronavirus means rethinking how they have approached elections for decades, meaning shots of large crowds celebrating across the 50 states are now much less likely due to social distancing rules. Vox pops have to be more thought out, while limits are in place on how many guests can appear inside studios.

Yet covering the election in-depth remains a priority. Head of Sky News, John Ryley, explains: “The result and subsequent fall-out of the US Election will not only decide the fate of America but will also have a ripple effect on the rest of the world. It is now more important than ever to provide our audiences across digital, TV and audio with clear facts, analysis and eye-witness reporting of this major event. Sky News is proud to be at the heart of the story with coverage from both sides of the Atlantic.”

Sky’s will cover the polling as part of an election special, America Decides, which will be broadcast overnight on Tuesday 3 November, anchored by Dermot Murnaghan from a studio in Washington DC.

On the night, the US coverage will be complimented by Ed Conway’s Augmented Reality set-up at Sky’s HQ in London where a stunning ‘Race to the White House’ will allow viewers to visualise which presidential candidate is leading as the state results roll in.

As the drama unfolds, Sky News will have real-time results from every county in every key state across the US, as well as the results of the National Exit Poll. It will be the most comprehensive election data ever used by the team, Sky says, with a core focus on the voices and views of the people of America whose votes will decide the outcome.

Fellow Comcast stablemate CNBC has also unveiled its coverage plans. On Tuesday, November 3rd, CNBC’s election night coverage will kick off with a special edition of The News with Shepard Smith at 7pm ET with Anchor Shepard Smith reporting on the latest election results during his hour-long newscast and throughout the evening.

Along with CNBC’s journalists positioned in key battleground states across the country using the network’s exclusive States of Play polling conducted with Change Research, CNBC will utilise the wider NBC News Group portfolio to provide real-time election results and reaction from voters and experts across the nation.

Overall, more than 100 journalists will take part in the NBC News Group coverage across the group’s range of channels, with reporters set to be placed in key swing states such as Nevada, Florida, Pennsylvania, and Michigan.

The network will collect a national exit poll in all 50 states and the District of Columbia as well as state-specific exit polls in 24 states with approximately 800 exit poll interviewers. Plus, telephone polls for absentee and mail-in voters nationally and across the same 24 states, up from 13 in 2018. The network will also conduct early in-person interviews in eight states, up from two in 2018. Overall, NBC News will interview more than 100,000 voters in exit polls.

Fox News is set to be one of the biggest networks to play a role in the election coverage.

Fox will leverage tech from Fortnite creator Epic Games to produce real-time visual effects, including a 3D virtual White House on-set, with similar interactive graphic elements planned to highlight the balance of power and net gains by the parties. The popular vote and electoral vote counts will also be giving the virtual treatment on set. 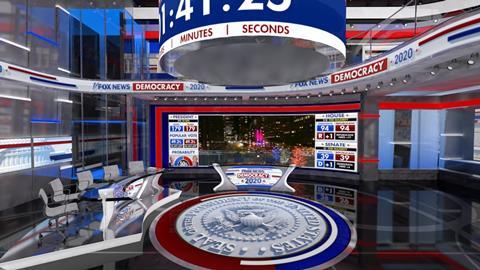 The channel’s 14-foot video chandelier, which it debuted in 2016, will also return, displaying video and graphics in tandem with a video floor located directly beneath it.

Fox adds: “Fox News Predictability Meters, designed to calculate how a race in progress is yielding a predicted winner, will be expanded beyond the national level to also analyse possible outcomes of state-by-state races. The “Meters” will provide insight into which candidates hold the winning advantage at any moment in time based upon statistical models, while voting precincts report in and critical votes are being tabulated.

“Bill Hemmer’s signature “Bill-board” will also return to provide viewers an interactive presentation platform with new technical capabilities for the 2020 election. Based on real-time data technology, Hemmer’s “Bill-board” will enable a more dynamic view into all election data, census data, and historical data, to drill down state-by-state, county-by-county and illustrate scenarios that can lead the different candidates to the path to victory.”

The US election will also be a key focus for news broadcasters worldwide.

ITN will provides news coverage for UK broadcaster ITV. ITV confirmed its line-up for its overnight US election programme. Tom Bradby will present from Washington DC as the lead presenter of Trump vs Biden: The Results and will be accompanied in the studio by Washington correspondent, Robert Moore and US political analyst Keneshia Grant, Julie Etchingham will report live from the swing state of Florida. This will then transition into Good morning Britain at its usual time of 6AM GMT.

According to ITN head of foreign news Michael Herrod, Covid-19 has had a notable impact on plans compared with previous elections.

He tells IBC365: “It has been much harder to plan for due to the travel restrictions, but we are sending a team similar in size to four years ago now that we have an ability to get to the US.”

Units will be deployed to follow both Trump and Biden, with crews also located in key swing states such as Florida and Michigan. Herrod says ITN edits will all be done on location and additional coverage may also be taken from US broadcasters where relevant.

He adds: “Each separate reporting team will have a camera operator who will shoot and edit and have a LiveU for lives. Some of the camera operators will be used for the presentation of News at Ten and the election night programme.”

For the BBC, there will be two teams: One based in Washington, with the broadcast being led by Katty Kay, while Andrew Neil will anchor the BBC’s coverage from Broadcasting House in London, in what will likely be his final election coverage for the network before he joins yet-to-launch news service.

BBC head of newsgathering, Jonathan Munro says: “The US Presidential election is one of the world’s most important political events, and always has a big impact on politics across the world. Our goal is to make sure that we provide our audiences with the complete picture over the next three weeks. On election night, Katty and Andrew will bring an incredible level of experience, knowledge and authority from both sides of the Atlantic.”

Audiences will be able to follow all the action on the BBC News website’s dedicated US Election live page for all the latest updates in the run up to the election, on results day itself and after. There will also be live maps tracking results for the presidential, Senate and House of Representatives races, although the BBC is not planning to use the famed “Swingometer” that it uses in UK elections because it is less suited to the US election.

The show will be edited by BBC Election Night editor Sam Woodhouse, who will operate out of broadcast house, which will act as the main lynchpin centre for the coverage.

One key challenge for all of the broadcasters is covering an election that will see a huge increase in mail-in voting. At the time of writing, around 80 million Americans have already voted through mail-in or absentee ballots – around 58% of the overall election turnout in 2016, when only 47 million votes came in before election day, and 138 million ballots were cast altogether.

Different states have different rules for how - and when - to count postal ballots, meaning there will be large gaps between them in terms of reporting results. Some states, like Florida and Arizona, begin pre-processing ballots weeks before 3 November. Others, like Wisconsin and Pennsylvania won’t touch these votes until election day, meaning they’ll likely be slower to count.

“The challenge will be the order in which the votes will come in and try to keep track of whether that is an accurate picture of what is likely to happen,” Woodhouse explains to IBC365. “In previous elections, there hasn’t been any such a factor.

“President Trump is telling his supporters to go out and vote in person one day, and Joe Biden supporters are expected to vote by mail in far larger numbers. This affects what order they are coming in and and what bits are counted.

“We’re quite used to keeping track of if its urban areas or rural coming in first. But we’ve not had to track whether it’s mail-in ballots being counted. So, it is quite possible that one candidate may be ahead decisively with half the votes counted. And we are trying to find out what type of votes have been counted, and whether that means that candidate who is ahead is still likely to be ahead at the end of the count. That is going to be a big change for viewers.”

Unless there is a clear landslide, it seems likely that the election won’t be settled on the actual election night, giving broadcasters material to focus on for days. But though technology allows them to overcome some of the challenges of this unique race, it can’t solve them all.