The UK TV industry is diversifying both culturally and geographically and the Royal Television Society (RTS) is at the heart of championing this change, says Theresa Wise. 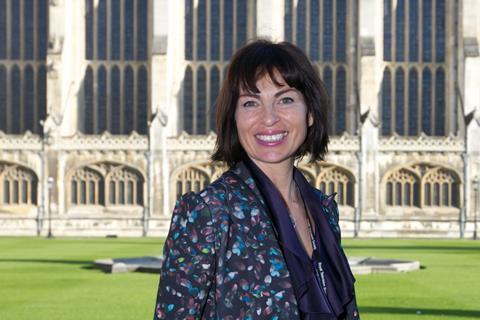 Since completing our transformation plan in 2016, the Society’s membership has increased, the bursary programme is burgeoning, and our events have gone from strength to strength.

Television – which for the RTS is any video storytelling on any platform – has evolved considerably in the past decade, and the UK is a great beneficiary of the growth in the market. This is down to the experience and talent of UK writers, producers, crafts skills practitioners and performers. In turn, the RTS reflects this industry vibrancy.

We have a number of core objectives which build on the achievements of the five-year strategic plan and include:

• Promoting and developing the Society’s membership and volunteer base in pursuing industry aspirations.

We are very proud of the RTS Bursary Scheme which supports students from low-income households that earn less than £25,000. And we are pleased that the television production and broadcast journalism bursary has attracted many students from outside the capital. Also, just under 40% of bursary recipients are from black and minority ethnic backgrounds. I am honoured we can support and champion young talent from diverse backgrounds and encourage them to enter and contribute to our thriving industry.

We awarded 40 bursaries this year, with backing from great patrons including Disney, STV, All3Media and industry luminary Angela Jain from ITV. By the end of the year, 175 people will have successfully gone through our bursary scheme

Young people want to work in the television industry and something I am focusing on is how we can matchmake eager, entry-level employees with companies that are looking to recruit.

Our CV workshops and masterclasses have been very well attended and we are looking at how we can turbo charge them in the future. We have already had two career fairs which were sell outs; Birmingham had 600 attendees and we were sold out in London with an attendance of 1,200 people.

My team and I are now investigating how we can grow the careers fairs and enhance our education plans to help young talent even more effectively.

The television industry is thriving and now more than ever is an incredibly exciting time to be working in the industry.

Some major deals have already led to changes to the landscape; we have seen AT&T, Viacom and CBS join forces, while Disney and Fox have combined synergies, among a lot of smaller deals and many planned OTT launches.

We will probably see more deals before the year is out and while some of that means jobs cuts there are some roles where there is huge demand. Examples include data analytics, direct-to-consumer operations, and marketing and creative leadership.

This disruption is fantastic news if you’re a production company with great shows and returning series; it is worth remembering that production in the UK is growing by 5-7% a year – a growth figure many other industries would envy. The result of this is that there is considerable talent inflation. This means that there is pressure – in a good way – on broadcasters to research and champion new talent so that they are not always bidding for established names.

Collaboration is crucial, and there are lots of partnerships, with some of the players competing in one arena and collaborating in another.

The RTS is very fortunate to have such wide industry support and we aim to keep supporting young talent, provide a great platform for thought leadership and be a convening force in the industry.

Theresa Wise is chief executive of the RTS, one of IBC’s owners. Find out more about RTS at the Partnership Pavillion