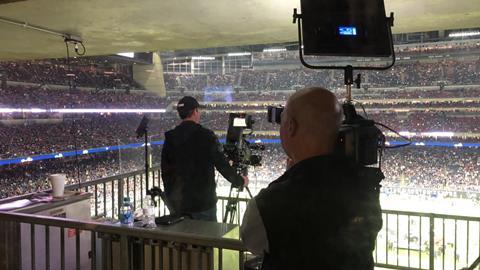 Verizon and Sony joined forces with NBC Sports to prove 5G-connected cameras can transform the way sports broadcasts are captured and produced.

The demonstration, which the duo claim to be the “beneficial option for future live sports broadcasts,” saw Verizon 5G Ultra Wideband’s low latency and high bandwidth combined with Sony’s mobile device, video, and encoding expertise enabled low-latency, high-quality video to be transmitted in near real-time to producers.

The change in broadcasting occurred during the Houston Texans vs New England Patriots football game at NRG Stadium on 1 December.

Verizon lead engineer Victor Romo-Aledo told IBC365: ”The goal was to show that 5G can enable remote production teams to be located anywhere, regardless of where the games’ taking place.

”Also, to show that 5G’s instant wireless connectivity allows cameras to be untethered so they can be free to roam and get more creative camera positions and angles throughout the game. This can reduce set-up times and costs required for camera system integration.”

Romo-Aledo explained the team succeeded in overcoming the challenges to avoid impacting other camera crews, the fan experience and overall game.

He added: ”For live sports broadcasts, 5G means you can transmit video wirelessly so cameras do not have to be wired and can be free to roam around to get more unique angles on the field.

”It also allows you to stream high-definition video to production teams located anywhere in the world versus in-stadium production rooms or trucks.”

Verizon explained that a camera person from NBC Sports captured video of the game on the field using Sony’s PXW-Z450 shoulder camcorder. The video was streamed through Sony’s prototype transmitter box and Xperia 5G mmWave device, via Verizon’s 5G Ultra Wideband network to a production room in the stadium.

“5G’s high bandwidth and low latency can enable high definition video to be streamed essentially in real-time and captured with no wires on the field.”

The test showed that 5G-connected cameras can be a reliable and beneficial option for future live sports broadcasts.

The technologies used benefited the broadcast from low latency and high bandwidth, enabling the high-quality 5G video to be transmitted in as close to real-time to producers as possible.

“The test showed the potential for remote production teams to be located anywhere, regardless of where the game’s taking place,” the companies said: “5G’s essentially instant wireless connectivity means that cameras can be untethered, allowing for more creative camera positions and angles throughout the game and reducing set-up time and costs required for camera system integration.”

“Sony is uniquely positioned to offer an end-to-end solution for professional content creation and mobile communication technology, and our joint achievement on this proof of concept of live sports production will pave the way for wider 5G applications.”

Verizon and Sony said they will continue to pursue even more flexible and effortless live sports production workflows and solutions using 5G.

In a dedicated push to accelerate its content library to showcase its 5G network, Verizon Media announced in October the launch of In the Know Network to expand its short-form video business.

The EBU said it would produce two reports by the end of the year aiming to establish a clear industry perspective and agreement on the view of what 5G can offer for services and applications related to industry needs.