Virtual reality is set for lift off

VR Industry Forum President Rob Koenen has insisted that the hype about VR is over and the industry is poised for strong growth in the next few years. 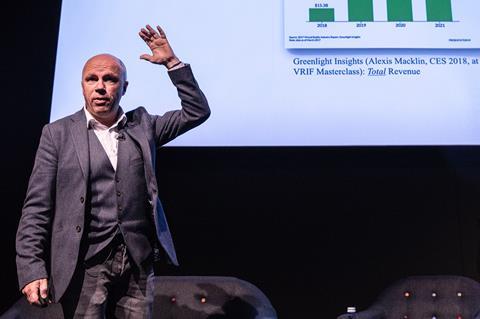 Speaking at an IBC VR Masterclass, Koenen said that the outlook for VR was very healthy. “Plenty is happening in the market, which it is predicted will really start to grow next year.”

There are any number of market predictions forecasting strong growth for VR, said Koenen, who picked out Greenlight Insights’ statistic which predicts that by 2022 the global VR market including hardware, content, software and services will grow to $74.8bn.

“Everybody is dipping their toes in the water and there is a lot of investment going on. Sky, for example, is doing a lot of advanced stuff and their investment is starting to pay off – with the broadcaster offering exclusive VR content to its customers.”

“VR headsets started off at around $2,000 but now they are better, standalone wireless devices offering three degrees of freedom (DoF) or 6DoF for a fraction of that price.”

As the market penetration of VR headsets builds, Koenen said that most VR consumption was on flat devices (such as mobiles or tablets) – although 360 content was surprisingly compelling even on these.

“Everybody is dipping their toes in the water and there is a lot of investment going on.” Rob Koenen, VR Industry Forum

He added that a healthy VR ecosystem was coming together, from VR toolsets in editing systems with specialist stitching software tools to the roll out of powerful 5G networks to support the delivery of VR and AR content.

“What we need for VR to be a success is for the consumer to buy more devices and for producers to introduce services and production in the market. This takes time.”

Koenen insisted: “VR adoption is on track. The goal is to create the market with producers needing a single format with wide reach, and consumers and VR device manufacturers wanting high end VR experiences.”

Light Field Labs CEO and Founder Jon Karafin said that his company would bring his ground-breaking holographic 3D technology – which will be able to generate VR experiences without headsets – to market by 2020.

Light Field Labs has produced a prototype holographic projector, R150MP, which will act as the building block for the construction of holographic walls from which holodeck experiences can be made.

Read more VR has made “considerable strides” in 2018