IBC2017: Message bots not only deliver huge engagement and discovery potential today, but once allied with voice will become even more potent. 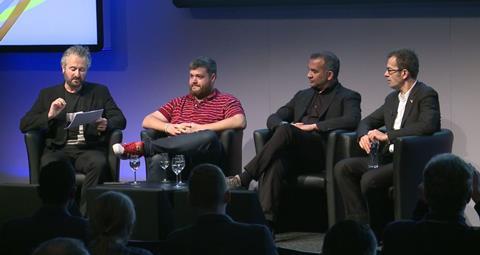 Messaging bots might have limited applications, but they currently command extremely impressive response rates, as well as adding simplicity and encouraging content discovery, a panel concluded at IBC2017.

However, in spite of his enthusiasm, Lawrence took pains to emphasise that bots are no panacea, and are still limited by the technologies available, as well as use cases.

“I hate the term ‘chatbots’ – nobody actually wants to talk to a bot.

“They do create a powerful interactive journey though – bots in a broadcasting can deliver pre-launch, in season, out of season functionality very efficiently.

“The potential is huge”

The In Conversation with…Bots: Messaging and Voice Platforms as the Next Battleground for Consumers session was chared by OpenMarket Chief Evangelist Oisin Lunny, who said that mobile messaging was experiencing a renaissance due to the rise of conversational commerce and the opportunity for chatbot powered one-to-one engagement on a global scale. He also spoke about the forthcoming Rich Communication Services initiative which he said is forecast to eclipse Facebook Messenger in less than two years.

Panellist Fabian Birgfeld, CEO and Co-Founder, W12 Studios, introduced a particularly relevant example to the session of a bot created for Verizon, that enabled customers to get basic customer support such as upgrade information, troubleshooting and order tracking, as well as provide content discovery.

Birgfeld was particularly keen to point out the single touchpoint nature of messaging bots, potentially simplifying interactions with a brand.

“TV used to be quite confined, a box in the living room, a sofa and a remote to mediate, but it is now much more complex.

“Bots offer one way to help mediate and move from simple command and control to conversations. Overall, they can simplify interactions. Let’s not forget that bots may be mainly text based now, but voice is already possible and growing fast – the potential is huge.”

Birgfeld also quoted a Gartner stat that predicts a full 20% of user interactions will take place through virtual intelligent assistants (VPAs) by 2019.

Apple’s Siri and Google Now are currently the most widely used VPAs on smartphones.

Birgfeld said: “One of the key problems for service providers is content discovery, and the messaging bot can really help there. All the conventional ways to do content discovery are incredibly tedious and very expensive, a messaging bot combined with voice can be very powerful – the potential for solving serious pain points is immense.

Lawrence pointed to authenticity as key for millennials. He said: “The biggest issue is when you try to claim something is a human when it’s not. You should never claim that! If people find out they’ll be really annoyed. It doesn’t matter though – when you get a message from your idol you get a nice feeling even though you know it’s a bot. The superfans love it!”

In conclusion, Birgfield said: “What we are seeing right now is the first of the non-linear communication that is taking place that has mass appeal and solves a use case, then we can move forward.

“When I look in the crystal ball I see a lot of convergence in these technologies creating experience that are quite human. The stage that the technology is at now is to really blur that line between artificiality and nature. It is a very hard challenge to get right.”