A new system concept for DTT, called “WiB”, is presented, where potentially all frequencies within the Ultra High Frequency (UHF) band are used on all transmitter (TX) sites (i.e. reuse-1).

Interference, especially from neighbouring transmitters operating on the same frequency and transmitting different information, is handled by a combination of a robust transmission mode, directional discrimination of the receiving antenna and interference cancellation methods.

Thanks to a higher spectrum utilisation the approach allows for a dramatic reduction in fundamental power/cost and about 37-60% capacity increase for the same coverage as with current DTT.

High speed mobile reception as well as fine granularity local services would also be supported, without loss of capacity. The paper also outlines further possible developments of WiB, e.g. doubling the capacity via cross-polar Multiple In Multiple Out (MIMO), backward-compatible with existing receiving antennas, and adding a second, WiB-mobile, Layer Division Multiplexing (LDM) layer within the same spectrum, either as mobile broadcast or as mobile broadband.

However, the high order modulation that is needed to carry the high capacity makes the signal sensitive to interference, which requires transmitters that operate on the same frequency to be positioned sufficiently far away and in a regular pattern. This way, their respective signals are attenuated so as not to cause harmful interference when they are received.

When SFNs are used, the same principle of separation applies to groups of SFN transmitters. A consequence of this approach is therefore that only a fraction (1:N) of the frequencies at a particular site are actually used, which is called reuse-N frequency planning (for DTT N is typically in the range 4 to 7).

With WiB a far more power-efficient approach is employed, which is to use potentially all UHF channels from all TX sites (reuse-1) and spread out the transmitted power equally across these channels, potentially as a single wideband signal using a single TX, where also the existing 0.2-0.4 MHz (2.5-5%) spectral gaps between UHF channels could be exploited.

Using reuse-1 and e.g. Quadrature Phase Shift Keying (QPSK) code rate 1⁄2 modulation allows for mobility and a spectral efficiency of about 1 bps/Hz. This is about the same as with an “all DVB-T2” implementation of DTT using existing type of frequency planning/reuse (assuming 5×40 Mbps MFN or 6×33 Mbps SFN).

In both cases (taking overhead into account) about 200 Mbps can be offered within the 224 MHz of DTT spectrum (470-694 MHz) that remains after the 700 MHz-band release. Simulations however, indicate that WiB could be used with significantly higher spectral efficiency than 1 bps/Hz (1.37 to 1.60), see chapter about performance results below.

The use of a very robust mode may also eliminate the need to use a Guard Interval (GI) altogether, since at low C/N levels the gain of using a GI seems to be lower than the overhead “pain”.

A commonly employed DVB-T2 mode is 256-Quadrature Amplitude Modulation (QAM) code rate 2/3. However, with QPSK rate 1⁄2 the required TX power (for a given coverage) is about 50 times (17 dB) lower per 8 MHz channel. The net effect of this is that a WiB signal would fundamentally only require about 10% of the total TX power (of all multiplexes) for DVB-T2, see Figure.1. There are however also other WiB gains that may further reduce the required power, see below. 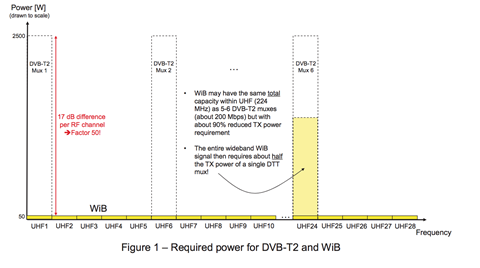