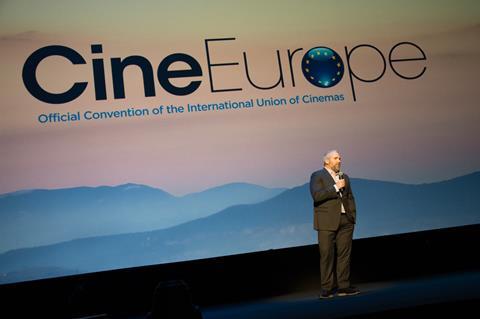 Netflix-style cinema platform: The deal was announced at CineEurope 2019

GoGoCinema has inked a deal with Golden Screen Cinemas to roll out its cinematic on-demand experience by the end of 2019.

GDC Technology – which backs GoGoCinema – confirmed it had this week signed a Memorandum of Understanding with GSC during CineEurope which will see the launch of the Netflix-style cinema platform.

The offering is designed to provide audiences a new opportunity to choose and customise their cinema experience as well as launching web-based booking app which uses crowdsourcing to fill seats in the cinema.

The on-demand experience will launch initially at Golden Screen Cinemas (GSC) flagship sites in Malaysia by the end of this year with plans to expand to other locations throughout 2020.

GoGoCinema is the first company in the moving pictures industry to bring together consumers, exhibitors and content distributors together in “one convenient and easy-to-use cinema on-demand platform.”

IBC365 reported in January that Netflix had seen record-breaking streams for its original production BirdBox, which starred Sandra Bullock, with 45 million accounts watching the film in its first week.

Netflix rarely releases data, however there is no doubt of soaring demand for audiences to stream movies at home.

The GoGoCinema launch comes at a timely turning point in the industry where content budgets are higher than ever before, and organisations are changing their content and business strategy to remain competitive.

GSC chief executive Ms Koh Mei Lee said: “In this modern age of the internet, streaming, and films on-demand, we understand that consumers want to be able to watch content on their own terms.

“This is why we are proud to launch the GoGoCinema platform, which is a natural next-step in empowering our audiences to select their own movies at a time convenient to them.

“The partnership between GSC and GDC Technology can create value-added experiences for movie-goers, as well as enable us to create a complete cinema eco-system.”

The platform joins a crowded online streaming market, and this was a challenge addressed at the launch, as GoGoCinema aims to create and offer users a unique experience within the current ecosystem required innovation and union for all stakeholders.

Chong added: “Any innovation which is created must be able to connect all important stakeholders on the cinema exhibition industry which means it needs to be consumer facing, tech-driven and automated to make it sustainable in the long run.”

The platform is enabled by GDC’s new Cinema Automation CA2.0, which provides automated management and a live-streaming media server for the content.

It enables users to use the GoGoCinema app or website to search for a content library boasting more than 2,000 films across different genres from current releases to classic and documentaries.

How does the GoGoCinema app work?

Once the movie is selected, they select a theatre, date and time most suitable from number of options available.

Next, they have the option of selecting between:

According to the Global Web Index research IBC365 reported in February, almost half of UK filmgoers selected Netflix as its favourite content distributor ahead of cinema to consume new content.