disguise has added to its gx range with the gx 2c flagship server, designed to meet ever-increasing creative demands and technological advances.

The gx 2c server features even more GPU processing power, more capture and storage, as well as 10-bit and HDR support. Creatives can now build environments with more particles, effects and richer scenes, at higher resolutions and smoother frame rates. As creative ambition increases, the GPU and memory has been maximised in direct response to user requests for greater real-time content performance. 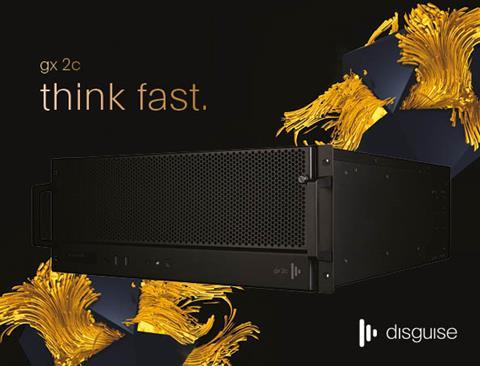 The gx 2c can capture eight 3G-SDI inputs, unlocking new workflows for broadcast and live events, where they will be able to utilise more live feeds than ever before. The video inputs allow users to capture 2x2160p60 (2x4K@60), four times the capability of the predecessor, the gx 2. These inputs are also 10-bit capable, with the same low latency as existing pro and gx range machines.

The gx 2c also has double the amount of media storage of the gx 2, with a 4TB NVMe drive fitted, freeing up creatives to work with better quality codecs. The increased storage, combined with increased capture capabilities plus all the rendering power, will enable live events creatives to grow and expand their vision even further.

Designed to scale and fit in as part of a bigger media server system, the disguise gx 2c enables creatives to go beyond the power of a single server solution, into distributed systems, with many servers working as one to create a seamless immersive experience. Although designed for generative content, the gx 2c also has many additional media server features, including the  disguise production suite, built in pro audio and two 10G network ports.

“As one of our most popular server ranges, the gx 2c was born out of the innovation of our in-house teams designing and creating bespoke server packages for some of the world’s most well-known artists including U2, and Justin Timberlake,” says Fernando Küfer, CEO at disguise. “With its new capabilities, the gx 2c will be the most powerful server on the market for the real-time generative content market, and it will open exciting doors for our customers to heighten the experience of live events around the globe,” he adds.