The Spherical Drone Display, which was first shown in Europe at IBC last year, is now available.

NTT Docomo is actively seeking international partners for the product here at IBC, billed as perfect for entertainment and messaging solutions for event venues, including stadiums and concert halls. It started being used in Japan earlier this year. 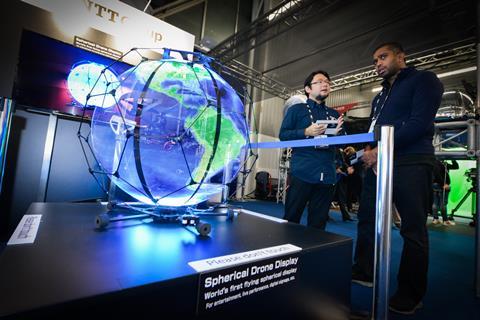 The drone can display clear images up to 760 by 320 pixels all around its curved frame. It creates the illusion of a curved spherical screen through rotating multi light-emitting diode (LED) strips taped along its spherical frame.

The device comprises a spherical external frame, an internal LED frame consisting of a series of eight curved LED strips that extend from top to bottom, a drone fitted inside the sphere and legs protruding underneath. During flight, the LED frame spins on its axis in a rapid horizontal motion, forming an afterimage effect to create the illusion of a solid sphere of motionless LEDs. The highly manoeuvrable drone can be operated virtually anywhere, including venues such as concert halls or arenas where it can fly around as part of a performance or deliver advertising messages, event information, and so on.