New from Atomos, the Ninja V Pro Kit has been designed to bridge the gap between compact cinema and mirrorless cameras that can output Apple ProRes RAW via HDMI or SDI. 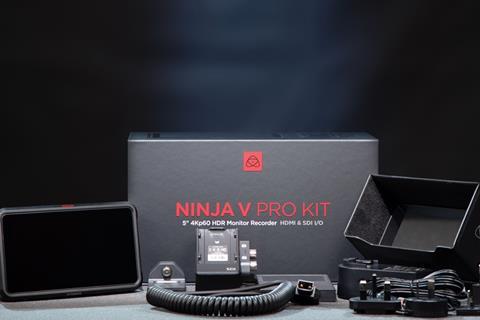 The Pro Kit also pushes these cameras’ limits, recording up to 12-bit RAW externally on the Ninja’s onboard SSD. Additionally, it provides the ability to cross covert signals providing a versatile solution for monitoring and playout/review.

The Pro Kit includes the Ninja V, AtomX SDI with activation for the new RAW functionality, HDMI-to-SDI cross conversion, along with the locking DC to Dtap cable to power from the camera’s battery. It also includes the AtomX 5in Sunhood, offering a monitor and recording package to cover a wide range of workflows.

The Ninja V’s compact 5in 1000-nit screen is designed to provide a foundation for scalability and modularity. Combined with the AtomX SDI module the Pro Kit provides the ability to record RAW via SDI from some of the leading compact cinema cameras on the market. Adding dual 12G-SDI connectivity expands compatibility with other cameras to provide offboard 10-bit 422 recording in edit ready codecs or as proxy files from RED or ARRI cameras, allowing the file naming and timecode from the camera to also be carried via SDI to the recorded files.

In playback mode the Ninja V provides a lossless signal distribution with 2 x 12G-SDI and 1 x HDMI 2.0 for simultaneous outputs up to 4K p60. When used in combination with the Ninja’s playlist functionality it is said to provide a fast and convenient way to review content or show a highlight reel.

RAW inputs can also be de-bayered in real time and non-standard high resolutions are processed to SMPTE standard output formats. Conversion to HLG, PQ or 3D LUT can also be applied allowing for RAW or LOG content to be viewed with the correct application of artistic intent.

With 1000 nits, high pixel density the 5in screen provides clear and accurate monitoring for HDR and SDR. The Ninja V focuses on image integrity, including the AtomX 5in Sunhood in the Pro Kit in order to increase the perceived brightness in the most difficult bright conditions or to dial out ambient light to increase the view in HDR. Users can simply clip on the mount frame and insert the hood and can even leave the frame in place to provide added monitor protection.

Adding the SDI module to the Ninja V Platform more than doubles its I/O functionality. To complement the inputs, HDMI or SDI connections can be cross converted, DCI cropped and 4K to HD down converts for video signals to provide a bridge between equipment such as EVFs, wireless TX/RX without the need for additional convertors.

The Pro Kit offers three ways to power the Ninja: via DC power supply with lockable jack to connect to the Ninja V; via the included DTAP cable to connect to any battery with a DTap output; or directly from an optional NPF battery or any four-cell NPF.

While the Pro Kit offers a complete bundle, existing users of the Ninja V are able to enhance their equipment to the same level by purchasing the AtomX SDI module for $199 and the NEW RAW over SDI and HDMI RAW to SDI video feature can also be added to the Ninja V via separate activation key for $99. Existing AtomX SDI module owners will receive the SDI-to-HDMI cross conversion for 422 video inputs in the 10.61 firmware update for Ninja V and the activation key for RAW over SDI is available to purchase from the Atomos website this month.