Atomos Connect is a new low-cost interface between professional 4K video capture and USB video class (or web cam) streaming at up to 1080p60. Connect can work with any HDMI device, including the entire Atomos range, as well as cameras with HDMI ports. 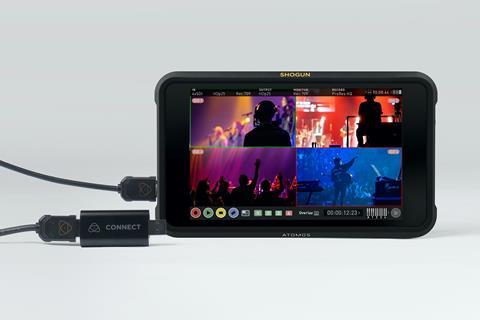 It is simple to use, has universal support for popular streaming platforms and at only $79/€79 is an affordable way for broadcasters working from home, gamers, vloggers or education facilities to bring improved production values to live streaming.

For many people currently using web cams, the ability to easily and cheaply plug in a professional quality HDMI-based camera will be a big improvement, and as Connect requires no drivers, users will be able to plug it in and go live instantly.

However, Atomos sees Connect as the ideal way for its existing users to get more out of their investment in its recorder/monitors, as it simplifies getting material out of them and onto a streaming platform. If users shoot and record using an Atomos device, they can then plug it in to Connect, which will convert the HDMI output to USB in real time for streaming on a Mac or PC. Connect accepts up to 4Kp30 video (up to 12-bit) and is capable of up to 1080p60 output over USB.

The biggest benefit is seen with Atomos’ Shogun7, which allows users to monitor and record up to four 1080p60 streams simultaneously and then cue and switch in real time via the touchscreen. As the Shogun7 can accept asynchronous feeds (sources don’t need to be locked), it means users can use more affordable cameras for multi camera production. Adding in Connect then allows the output from the switched feed to be live streamed on a Mac or PC. Atomos claims this makes the Shogun7 Connect package “one of the easiest and most affordable options for professional switching”.