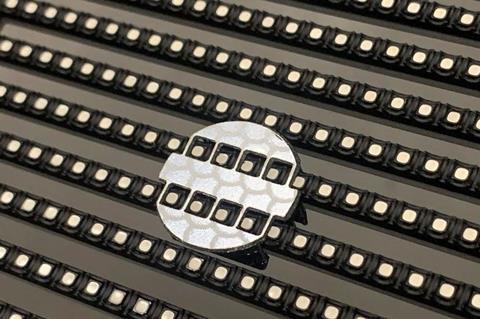 The translucent ceiling panels feature a newly engineered pixel suspension system that allows light and theatrical effects to pass directly through the back of the panels without affecting the image quality of the video. Each panel is less than half of the weight of similar LED panels and utilises ultra-bright 4500-nit LEDs. The panels have been optimised for ceiling use and reduces the overall heat load and acoustical challenges that are common in closed LED volumes. This new panel design also comes equipped with fully integrated infrared tracking reflectors on each panel to triangulate the camera positional data with the Mo-Sys StarTracker system while not obscuring the LED pixels.

Michael Geissler, CEO Mo-Sys Engineering, commented: “We’re delighted to have worked with Diamond View on its new Vū panel. This will enable cinematographers to have more creative freedom with the camera angles they choose inside an enclosed LED volume, and with additional creative lighting shining through the LED volume ceiling.”

Diamond View’s CEO Tim Mooreadded: “With new LED volumes being built all around the world each month, we believe these newly released Vū ceiling panels are positioned to be one of the most comprehensive LED ceiling panels on the market.”