Video transport and connectivity specialist Dejero has introduced a new version of its EnGo mobile transmitter, the 5G-ready EnGo 260. 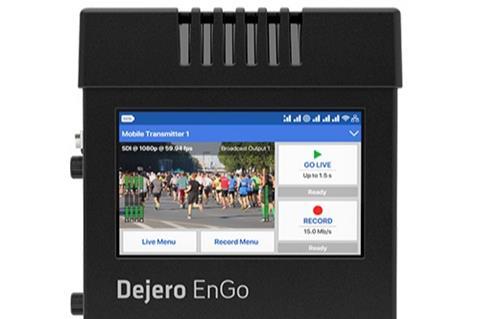 EnGo 260: Is the latest version of Dejero’s mobile transmitter solution

Due to have been showcased at the NAB Show this month, the transmitter incorporates Dejero’s Smart Blending and Hybrid Encoding technologies. It weighs 30% less than its predecessor, features a screen that is 85% larger, and now includes a three-hour internal rechargeable battery and global modems for simplified international travel.

Built with aircraft aluminium construction and polycarbonate ABS bumpers, the EnGo is designed to withstand the rigours of daily use by news, sports and live production crews.

Also new from Dejero is a smaller form-factor CuePoint server for use in field environments where it can be easily racked into mobile carts or vehicles. The low-latency return feed server – which follows the launch of the 1RU CuePoint 100 in 2019 – is aimed at simplifying talent cueing, production and confidence monitoring, and real-time teleprompting in the field.

With as little as 250ms of latency, CuePoint servers can keep teams at the broadcast facility and remote location synchronised by sending video and audio, alongside teleprompting feeds, to production teams in the field to facilitate the creation of compelling live content.

A maximum of eight return video and teleprompting feeds from the broadcast facility can be seen in the field by the talent on a tablet or dedicated monitor above or below the camera, or on multiple mobile devices by camera operators, field directors and technicians.