The new NewTek TriCaster 2 Elite is claimed to be “the most powerful and complete live video production system on the planet”. 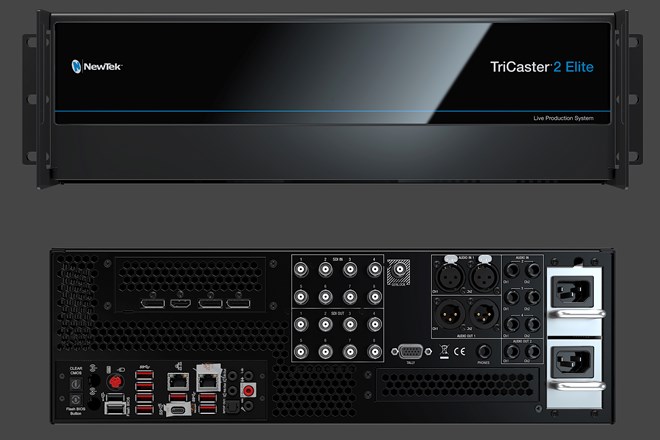 Besides high-end video production capabilities, it can also harness nearly every major video calling application in use today, delivering users a myriad of creative options. The platform is also said to be highly flexible and scalable, and supports both video over IP and traditional SDI.

“Serving the needs well of those who make visual storytelling a key part of their business is made possible by combining IP networking, software-defined solutions and a focus on the customer experience,” said Dr Andrew Cross, president of R&D for the Vizrt Group (which owns NewTek). “TriCaster 2 Elite currently has no equal in terms of capability and value, and I believe that it is the best product we have ever made.”

It can work with nearly every web conferencing tool, including Skype, MS Teams, Zoom Meetings and GoToMeeting – as well as all IP video sources, such as NDI, SRT, RTMP, RTP, HTTP, SRC and smartphones. These, along with SDI sources, can be accessed and used simultaneously, meaning show producers will be able to connect with in-studio guests and remote video callers “without compromise or worrying about connectivity”.

The system, which lists at $27,995, includes eight mix/effects with four layers each, enhanced by strong integration with Adobe’s Creative Cloud tools. It also includes simplified teleprompter-based scripting with Microsoft Word document support. Virtual and augmented reality scenes can be rendered in real time from Adobe Photoshop files while non-standard frame rate and aspect ratios such as 9:16 simplify delivery to a plethora of different media screens. Other features include: frame sync on every input; animated GIF support in buffers; social media publishing; audio mixing and routing, including optional support for Dante and AES-67.

The new NewTek TriCaster 2 Elite is claimed to be “the most powerful and complete live video production system on the planet”.