Dealing with the threat from online players and new entrants 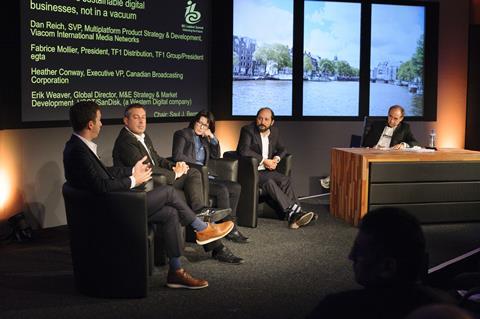 One of the more dramatic examples came from Heather Conway, Executive President of the English services of CBC, the Canadian public service broadcaster, which has radically changed its working methods, with the help of IBM.

Asked what CBC had changed to meet what many are calling the fourth industrial revolution Conway’s reply was “you change everything.”

Digital transformation had become a daily obsession, terrifying and exciting at the same time and in particular, the move to digital, and indeed the importance of ethics, could not be left to separate departments in their own silos.

“You can’t delegate either digital or ethics” Conway insisted.

On a practical level more than 1,700 staff, in what is a 90% unionised working environment, had been re-trained across the country to reflect a new set of editorial priorities - spearheaded by mobile first.

After mobile in the new time- sensitive pecking order came online followed by radio and only finally traditional television.

Changes in working practices at CBC have also been fundamental. The traditional role of cameraman or woman is already a thing of the past and replaced by video journalists who have to be able to tell a story as well as film it.

The changes are seen as absolutely vital if the public service broadcaster is going to survive the deluge of competition not only from across the border in the US but from the likes of Facebook, Amazon and the ever increasing number of OTT (over-the-top) operators.

Above all there is a passionate determination that the public service approach and ethos should survive in an increasingly challenging broadcast environment.

As the CBC executive sees it: ” Virtually every decision we make today has to answer the question how does it advance building the digital CBC that will one day replace the linear CBC.”

Dow Jones, publishers of the Wall Street Journal and business magazines such as Barrons, faces different media challenges but has also had to transform the priorities of the organisation.

Until recently advertising (mainly from the paper editions but also digital) was top of the pile, followed by subscriptions and data.

Advertising is still important but even that is changing to a “winner-takes-all” environment when you have to fight for exclusive multi-year deals from advertisers rather than automatically getting a slice of whoever account was going.

Two years ago when a total of 2 million subscribed to at least one Dow Jones product the company set an ambitious target of 3 million by the end of this year.

So far, in what is a dramatic growth story, membership has risen to 2.8 million and continues to grow as part of a “flight to quality” in the wake of President Trump, fake news and alternative facts.

In such an environment new readers has been attracted who are markedly different from traditional WSJ readers. They are younger, and include a higher proportion of women, and more surprisingly, there is an even split between Democrats and Republicans.

One large challenge remains for Dow Jones - getting what it regards as fair recompense from the large social media players such as Google and Facebook for expensively checked and authenticated information.

Tellingly the Wall Street Journal held a focus group of former subscribers and found to their surprise that all were still loyal and devoted readers of the Journal. They were just accessing it for free via social media. 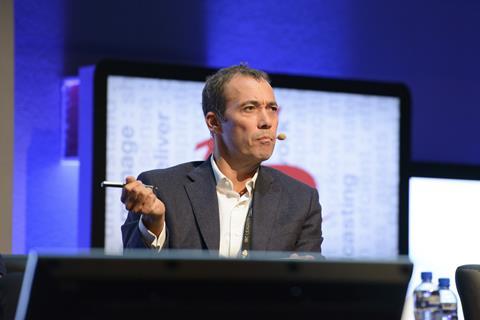 Will Lewis speaking to delegates during IBC2017

Senior executives such as Dow Jones chief executive Will Lewis are increasingly optimistic that Google and also even Facebook are beginning to accept that all news is not equal and exploring ways of recognising the difference in payment protocols as a result.

In the open Forum, later elaborated in the Leader’s Summit, Kim Poder, chief executive of Modern Times Group (MTG) Denmark warned that the move to watching more on mobile and social media and the rise of new players meant that established broadcasters could no longer be “fat cats sitting on their hands.”

They had to respond to the new environment and respond quickly, MTG remained committed to its core Scandanavian broadcasting business, but it had sold broadcast outlets in Africa, the Balkans and the Czeck Republic to release capital to invest in new ventures.

The company’s biggest play has been to plunge into the ESports market with the purchase of ESL and a number of related groups.

The iniative had helped turn MTG from being “a traditional broadcaster into a global digital entertainer.”

ESports - watching and supporting teams of top video games players compete- and covering the activity through 24-hour digital channels, has turned into a international phenemon.

Poder believes that ESports will be a $1.5 billion market by 2020 and is as popular as normal sports. Already many thousands are turning up to live events to watch their video gamer heroes  compete against each other.

Recently no less than 173,000 people travelled to Katawice in Poland to pay to watch an ESports tournament. Another huge tournament will soon be held in New York.

When asked about what many saw as a strange phenomenon, the MTG executive said it was no different from those who paid to watch live football.

ESL has now built a global footprint and was being backed by global brands  such as Mercedes.

The experience of CBC, Dow Jones and MTG with their growing emphasis on digital and mobile chimed with research carried out for the Leader’s Summit by IBM Media and Entertainment Industry Solutions.

A survey of nearly 21,000 people in 42 countries pointed to the rising power of mobile and video consumption on mobile, particularly in the developing world.

The IBM view is that there is an urgent need for broadcasters “to deliver the best individual experience to every consumer in context, in the moment and all the time.”

There has been an “explosive”  growth of online video with the proliferation of smartphones, tablets, internet- connected TVs and games consoles and other IP-enabled devices.

While traditional TV is still the screen of choice in most mature markets the mobile phone has become the key screen for watching video in emerging markets with 55% of surveyed consumers using it daily for this purpose compared to 28% in mature markets.

A large further increase of video use on mobile phones is expected over the next three years - an average of 45% across the 42 countries compared with 36% for laptop computers and a zero increase for traditional TV.

Internet enabled TV will also show a 45% rise with tablets up 40% and game consoles with internet expected to show a 30% rise.

Pressure, however, will be on to provide a better service with 65% saying they often or regularly experience buffering problems, 62% complaining about long waits to start a video and 57% unhappy about video quality.

Against such a background IBM warns that a more sophisticated “cognitive” approach will be needed to manage data flows to enable broadcasters to move from transmitting four or five channels to offering several million ” cable channels for one” that the consumer will increasingly demand.

Media processing throughout will increase dramatically as content has to be repackaged for many more “channels”  with the timing of peak loads likely to be unpredictable.

“Media companies will need to ensure that their systems are flexible, scalable and interoperable, prompting them to move aggressively towards multi- tenanted or cloud based platforms,” IBM believes.

Overall IBM made it clear to the Leader’s Summit delegates that with customer preferences changing so rapidly they must embrace enthusiastically the opportunities the marketplace was currently presenting.

This would mean everything from applying cognitive technology to create personal video services to revamping current infrastructure to meet the new demands while cutting costs to be able to invest more in content and improving the customer experience.

Before the delegates went into the summit session they heard in the main forum how fast one of their new emerging video competitors, Facebook, was moving into the video space. 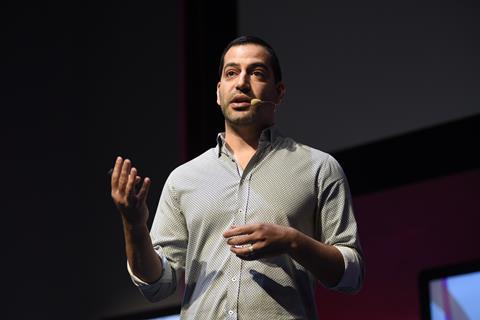 Daniel Danker, Facebook product director told how video was “exploding” on Facebook and how it has launched its new service Watch in the US only two weeks ago.

The social media giant has commissioned publishers to create content for the new channel which was already showing new content that includes a behind the scenes series on the Spanish football team Real Madrid and Humans of New York, a weekly series of interviews with New Yorkers.

And lest there be any doubt about the competitive threat to traditional broadcasters, Danker spelled out that the company was interested in genres such as reality TV, live sports and comedy and would be taking its search for “communities of passionate fans” around the world.

IBC says it is also determined to move beyond the one day Leader’s Summit  concept and keep in touch throughout the year with IBC information and insights though the IBC 365 website launched earlier this year.

Perhaps over time the senior executives from a wide range of communications industries who have attended summits over the past seven years will increasingly turn into an informal executive club of like minds and shared interests.