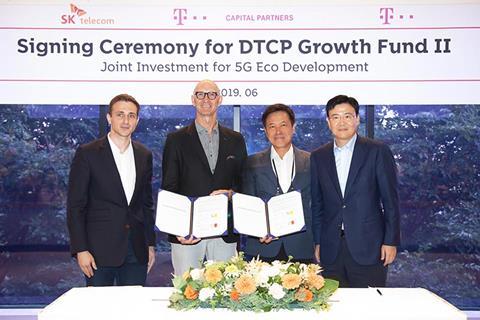 The R&D venture, which is set to launch later this year, will focus on developing core 5G-related technologies. SK Telecom said this will include a MPEG Media Transport (MMT) solution for low latency streaming. Other areas of focus will include 5G relay repeaters, a Multipath UDP solution and something to tackle 5G coverage in-building.

The JV will also drive innovations in new platforms and applications to offer differentiated performance and experience in next-generation services.

The partnership follows a memorandum of understanding that was signed by executives at the two companies in February during Mobile World Congress in Barcelona. The MoU set out plans to accelerate a strategic partnership between the two telcos, working together to find technological partnership opportunities.

“DT/SK Telecom partnership continues to be of strategic importance for both DT and SK Telecom.” Said Timotheus Höttges, CEO of Deutsche Telekom AG, “We want to work together to make tangible result and strengthen our partnership also with closer technical cooperation.”

SK Telecom also announced it is one of the latest firms to join Deutsche Telekom’s venture capital fund, Deutsche Telekom Capital Partners, investing $30 million in its Venture/Growth Fund II as part of the Korean telco’s ambition to secure future growth engines by making proactive investments in promising high-growth companies in the 5G era.

Deutsche Telekom Capital Partners was launched in 2015 and manages more than $1.7 billion of assets with a portfolio topping 60 companies across the technology, media and telecommunication sectors.

It founded its second fund last year, and has already raised more than $350 million, making five investments, according to a report from Reuters. DTCP’s Venture/Growth Fund II is focussed on Software-as-a-Service (SaaS) companies and has attracted investments from the likes of German optics company Zeiss, as well as HarbourVest, Neuberger Bermann and others.

In the context of the SK Telecom investment, DTCP will open an Asian office in Seoul and work closely with SK Telecom to identify and foster investment opportunities in the Asian technology leaders of tomorrow, it said.

“Through partnerships with companies throughout the world, SK Telecom aims to expand beyond the realm of mobile communications to become a global ICT company,” said Park Jung-ho, President and Chief Executive Officer of SK Telecom. “And I expect this, in turn, will lead to the revaluation of assets and competitiveness of SK Telecom.”