IBC2018: One of the world’s biggest production companies is increasingly using artificial intelligence to power creativity and cut costs. 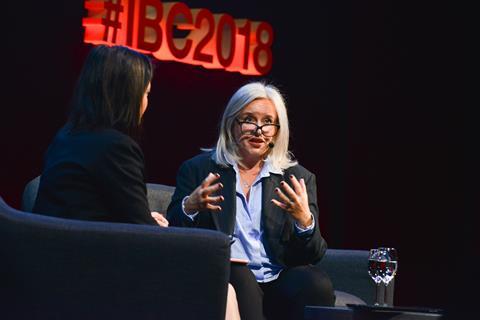 Lisa Perrin: “We are living in an industrial revolution”

Endemol Shine is already employing AI techniques to log scenes on one of its flagship formats, Big Brother, which was previously done by “banks of people typing in scene descriptions and time codes,” said Perrin.

Earlier this year, Endemol Shine worked with Microsoft to automate the production workflow on the Spanish edition of Big Brother. Endemol Shine is now rolling out the new workflow to other Big Brothers around the world.

Perrin said: “I know there is a lot of criticism of AI taking jobs way. But we are living in an industrial revolution – what it does is take away the most boring jobs in television.”

Perrin said that AI has allowed Endemol Shine to free up people and resources to do better things, at a time when production budgets in TV are under pressure.

“This technological revolution of AI is opening huge possibilities for places we couldn’t go to before and things we couldn’t see on budgets that are increasingly challenged. So for me it is really exciting.”

“We are living in a super exciting world. We will see more VR on our screens and AI will be informing more workflows.”

However, Perrin said the use of AI will never supersede the creative vision of producers.

She said “We are living in a super exciting world. We will see more VR on our screens and AI will be informing more workflows.”

She said that Endemol Shine has only just scratched the surface in terms of AI, and would look to use it elsewhere in its production portfolio – including in drama. “We have done it with one big format, and we are doing it with more formats. We are going to do it with scripted in some way and are experimenting with that.”