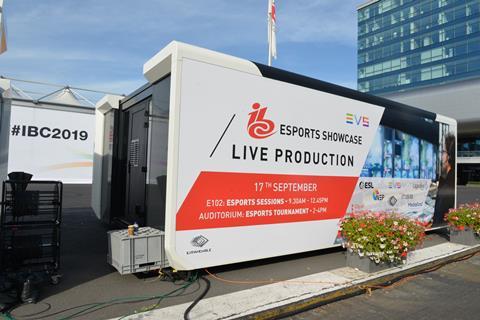 Return on investment is not just about cash, explained esports expert Michiel Bakker and chief executive of Ginx Esports TV, with esports audiences the new currency for revenue success.

Broadcasters were encouraged to invest in esports during an IBC2019 panel session with Bakker highlighting the “plethora of pathways” for broadcasters to tap into new revenue opportunities.

Speaking in the session titled ‘Entry into esports ROI and expectations,’ Bakker, who heads the largest linear esports channel, said: “We see ourselves as an independent production company, working with publishers in multiple ways depending on the development of their game.”

A key priority for Bakker is seeking those commercial opportunities through the distribution of the esports IP.

He said: “Broadcasters are looking for a return in audiences and ways to monetise those audiences in terms of advertising.”

Ginx Esports TV is in more than 55 million homes worldwide and produces 750 hours of content annually from its London-based studio as well as buying content from partners and works with directors for original content for its parent publisher business.

He said: “Esports is the new rock and roll… it’s the Holy Grail of audiences in terms of ad revenues.”

Bakker is arguably the knowledge gatekeeper of esports for broadcasters and pointed to the success US broadcaster Turner Sports has had in creating its own dedicated esports gaming league and broadcasting operation.

“ELeague was created to reconnect with audiences and to bring them back to the broadcast operation,” he explained.

Sky and ITV have also invested in esports by partnering with Ginx Esports TV, while Nippon TV bought an esports team in Japan. Bakker admitted these are “baby steps” for the esports ecosystem but with “more and more tournaments happening around the world, there will be steady growth with the total prize pool reaching $150 million.”

For broadcasters, harnessing the esports audience is critical, Bakker said, with reports estimating engaged fans number just shy of one billion. As such the media rights and competition for broadcasters, publishers, content owners as well as teams and tournaments is remarkable.

Bakker added: “The new digital platforms are delivering a lot of libraries and new content bespoke on a video-on-demand (VoD) basis worldwide.

“This is a journey many broadcasters are going through and their relationship with distribution platforms.. it will become an increasingly important part of channel operations.”

From a technical perspective, he acknowledged that esports presents its own challenges.

“Battle Royale format is 100 players playing the game and broadcasters have to track those 100 players; it is more complicated than traditional sports, not just moving the camera around the game itself, it is a very specific art.

He continued: “From a production perspective you need to know the game inside and out, there is a whole infrastructure of people who specialise in their game.”

Panellists agreed that “creating the content engine,” is key because “fans are different and loyal for the game,” Bakker added.