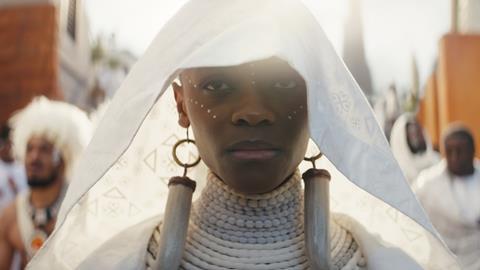 “It’s going to feel odd if Wakanda sounds like rain on a tin roof” Adrian Pennington reports on the challenges and successes of location sound recording the Marvel sequel.

The credits list on a Marvel blockbuster runs into the several hundred but even on a show as large as Black Panther: Wakanda Forever the location sound crew numbers just three or maybe four. 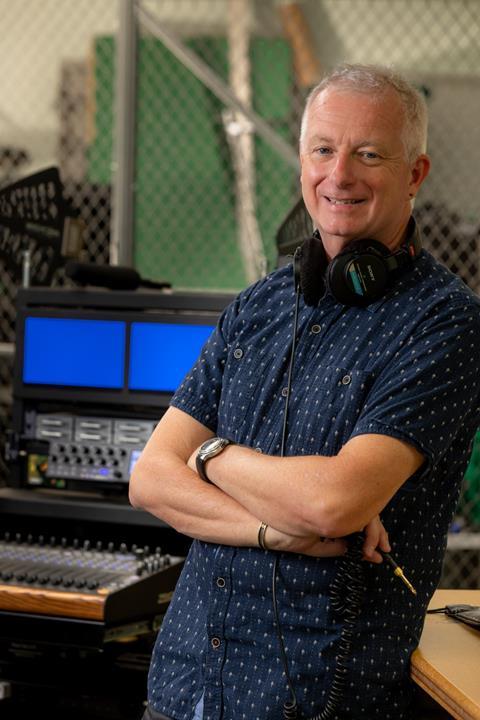 “So much attention is paid to the huge camera or art department but the core sound team must record the performance that ultimately touches an audience on screen,” says Peter Devlin, the five-time Oscar nominated production mixer whose work on more than 70 pictures includes Black Panther, Transformers: Dark Side of the Moon, Pearl Harbour and now Black Panther: Wakanda Forever. “The production mixer is the foundation - the bones - of performance. The last thing actors want is to have to redo their performance.”

As a boom operator on Danny Boyle’s feature debut Scout in 1987 Devlin learned a lesson which he applies to every project since.

“On those lower budget productions there wasn’t a lot of postproduction sound. We were on location in the Mourne mountains and responsible for so much more of the film’s elements than the dialogue, including foley and sound effects. The curation of sound from beginning to end became a mantra for me.

“Unless it’s a creative decision from the director to use ADR or you’re in really difficult locations like shooting in an airport, it is my responsibility to capture the recording of that performance to be used in the final film.”

Wakanda, believe it or not, is not some African-Atlantis but comprised of locations in and around Atlanta (plus copious VFX of course). With so many productions looking to take advantage of Georgia’s tax incentives, stages are at a premium. In this case, Wakanda was shot in at Tyler Perry Studios and in an abandoned part of a factory that once made optical fibre.

That presented Devlin with his biggest challenge. “You’re battling with the main interstate highway when shooting exteriors and then with rain on the roof shooting interiors. That noise can have a big impact on set. The cameras can keep rolling but if we heard rain on the roof we’d have to pause. It’s going to feel odd in the cinema if Wakanda sounds like rain on a tin roof.”

Supervising sound designers Steve Boeddeker and Benjamin Burtt take Devlin’s recording and strip it back to minimise background noise and hone in on the performance as the starting point for building the film’s sonic landscape. That’s after Devlin has surmounted a host of problems.

A major fight scene in Wakanda Forever was filmed on a set mounted on a massive gimble so that it could be tilted 45-degrees. The actors and boom op David Raymond had to be harnessed in just one of the more complex sound recording challenges.

The set for the film’s Shuri’s Lab (where Princess Shuri works on new designs based on Vibranium) tended to reverberate unusually, “even from footsteps of artists in the background” which threatened the clarity of foreground dialogue.

Another incident occurred during the scene when the set for Wakanda is flooded from huge water tanks. Raymond was in the water carrying a boom above his head and tracking actress Danai Gurira (who plays Okoye). As Devlin tells it, the boom op was then knocked off his feet into the water by a submerged stuntman. 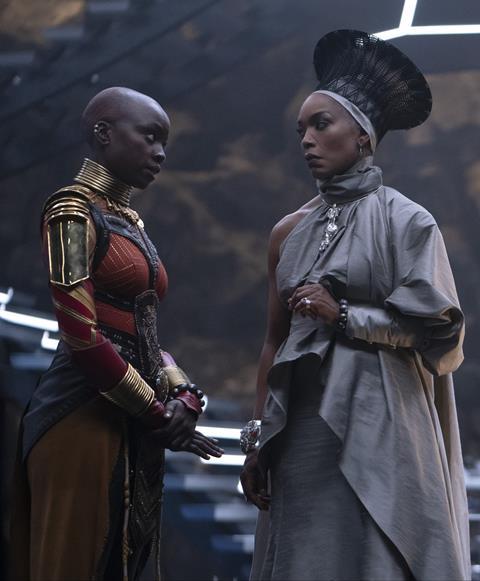 “Suddenly all I hear is silence,” says Devlin, monitoring the recording. “I know David is fine but I also know the sound is lost and we have to wait until the end of the take to tell [director Ryan Coogler].”

Many of the large cast needed to wear concealed mics. Devlin worked with costume designer Ruth Carter (Oscar winner for her work on Black Panther) so that voice performance would not be obscured.

“If you can’t use overhead microphones you are reliant on radio mics and you have to find a way to put them in the costumes to minimise the noise that all fabrics make when the actor moves,” Devlin says. “Working with a boom pole is so old fashioned, it’s been with us since the birth of sound but putting a mic above the actor’s is still the best way to capture sound.”

Director Robert Altman (M*A*S*H) is credited with forcing sound recording technology to change from single to multi-track to allow him to present scenes with overlapping dialogue. When Devlin began his career in the early 1980s he was still recording on single track reel to reel recorders. That evolved to two-tracks DATs which only advanced to four track digital recording in the late nineties.

Director Oliver Stone liked to run multiple sets digital recording on the set of American football sports drama Any Given Sunday (1999), Devlin recalls of his first experience of multitracking. “Jamie Foxx and LL Cool J would be recording their scenes on the football field while Al Pacino is doing his dialogue about what is happening on the field at the same time. Nowadays we can record up to 24 tracks on a hard drive.”

Cast and crew of the original had to come to terms with the tragic passing of star Chadwick Boseman from cancer in 2020. Wakanda’s storyline also resonates with a mourning for his presence as Princess Shuri (Letitia Wright) Boseman’s character’s sister, takes over the Black Panther mantle. 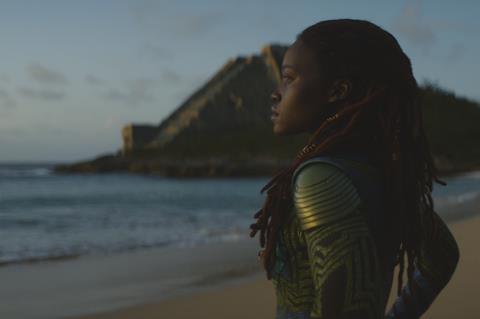 “Any sequel is always measure of the first but you could sense the loss felt by everyone on set and in the significance of Letitia’s role,” Devlin says. “When we recorded the funeral scene with a Senagalese singer Baaba Maal, there was this profound sense that this goes beyond any making of a film. The shared experience of this funeral was significant for me. I think we captured something special that conveyed the way Chadwick touched all of us. We still feel the loss of the man and the work he could have done.”

“Chadwick was a very quiet speaker, he had a tonality to his performance as T’Challa, and when he’d come to set he was always in character. Right at the end of the film with the final scene in the can and when he took off his mic for the last time I told him that I thought he was one of the quietest actors I’d worked with. He smiled and said, ‘Me? Quiet!” That was the only time I heard him being himself.”

Devlin was born and grew up in 1970s Belfast which was not always the easiest or safest place to visit the cinema. “But I was obsessed by Jaws. I’d read a book by Jaws co-writer Carl Gottlieb about the making of the film and couldn’t wait to see it. When I did I just wanted to go back and see it again. I persuaded my mum to let me see it three times in a week before she put her foot down but it launched me into a journey in sound.”

He auditioned for a job as trainee audio assistant at BBC Belfast and learned the job on a variety of programmes including current affairs, rugby internationals and TV drama. This included the ‘Billy’ trilogy of plays (1982-4) by Graham Reid starring Kenneth Branagh.

“In 2009 I found myself on the set with Kenneth directing Thor,” he says. “Everything comes full circle.”

Whilst he has not worked directly for Spielberg, Devlin has worked on the Spielberg produced Transformers (2007) and on Star Trek (2009) directed by JJ Abrams. On both occasions the directing great visited the set.

“I decided against going up to him to say that I came into movies because of him because I’m sure he gets that all the time. Still, being 10 ft away from someone who was such a massive influence on me was extraordinary.”

Devlin broke into America courtesy of director Michael Mann who, in 1987, agreed to the trainee’s request to visit the set of ground-breaking crime drama Miami Vice.

“’Dear Mr Mann would it be possible to visit…’ I wrote. Astonishingly I got a letter in response from him which I still have. “Thank you for your interest’ he wrote. ‘We’d love to have you visit the set.’”

“So a few weeks later I went out to Miami and it was as surreal as you can imagine. The set was on Miami beach. The first thing I saw were black canvas director’s chairs with the names Don Johnson and Philip Michael Thomas. There was a Ferrari and cameras on cranes. I was told by the assistant director not to talk to the two stars but I wasn’t in the least interested. I was more excited to see all the latest sound kit they were using.

“Well, okay, I’ll admit it was cool to be in the company of Crockett and Tubbs.”

Devlin will be awarded for his career achievement by the Cinema Audio Society next March.

It’s 5am in LA when Devlin speaks to IBC365, an early start that he claims not to mind having found it routine working for the BBC. He is currently on sci-fi feature Atlas.

“Now I’m off to work with Jennifer Lopez,” he signs off.