CES2023 Preview: What to expect

The Consumer Electronics Show, or CES, is the world’s biggest consumer electronics and technology show, and takes place in Las Vegas in the first week of January. The show covers a vast range of technology, from IoT and smart home tech to media, entertainment and automotive technology, as well as PC hardware of all shapes and sizes.

CES2023 is set to be a bumper year, after a couple of pandemic-related hiatus years. With that return to form, we’re likely to see a slew of announcements from some of the biggest brands on the planet. Traditionally, CES has had a strong affinity with TV technology launches, and over the years we’ve seen some fascinating concepts and previews go mainstream, including 3D TV, OLED and 4K, to name but a few. 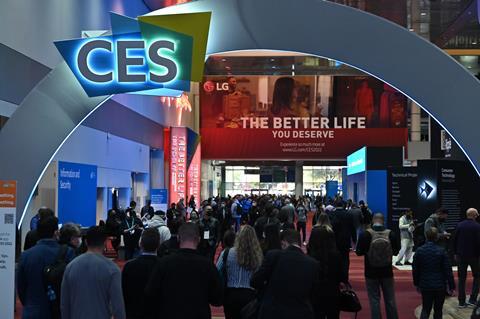 Virtual reality and augmented reality have played a part in the CES lineup for years now, but this year is set to see a real focus, with both Sony’s PSVR 2 and Meta’s Quest Pro due to make grandstand appearances.

Of course, the rumour mill is churning away on this topic, with even Apple tipped for a VR/AR announcement, but that’s unlikely to be rushed to suit the CES timetable - especially in the case of the Cupertino giant. However, Sony has very much set the tone here - anyone doubting the central role of the Sony PSVR 2 can simply take a look at Sony’s CES2023 livestream thumbnail - which features it prominently: 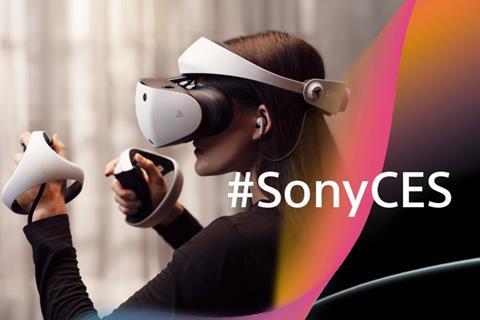 Interestingly, Sony and Meta won’t have it all their own way, with perennial VR competitor HTC also planning to unveil a set of dedicated compact VR glasses. First teased back in October 2022, HTC’s global head Shen Ye has confirmed that the new as-yet-unnamed device will feature at CES.

Read more The challenge: Ethics of VR and AR in media

Meanwhile, Canon is hoping to make a big splash around VR with the Canon EOS VR System, showcasing new Virtual Reality and imaging technologies, which will undoubtedly link in with the VR-specific lenses announced previously. The RF5.2mm F2.8 L Dual Fisheye Lens specifically targets VR, and the VR System includes EOS R5 and EOS R5C cameras. The brand has partnered with M. Night Shyamalan to create an interactive VR experience at CES, based on the director’s upcoming Universal Pictures thriller Knock at the Cabin.

At the other end of the VR experience, Sharp will be showing prototypes of new technologies for VR headset manufacturers to integrate. Sharp manufactures displays for VR headsets including the Quest 2. The prototypes will include a tiny camera module that can be used for applications like eye tracking, a compact ToF sensor that can be built in to measure distances and avoid collisions and an ultralight head-mounted display (HMD) with high-resolution displays.

While the metaverse has been a talking point for the last few years, an even tighter focus is planned at CES. Kinsey Fabrizio, senior vice president at the trade group Consumer Technology Association, told AP News that the topic is set to be a key theme at CES2023: “We’ll have a dedicated part of the show floor for Web3 technology. There’s also going to be shared and immersive virtual experiences. Automaker Stellantis and Microsoft have a partnership to create a showroom in the metaverse. There’s a company called OVR that has created a solution where you can smell in the metaverse. People are talking about unique ways to reach their customers, and different experiences people can have there.”

One example will be Vū Technologies, a network of virtual production studios which will host a virtual production workshop titled “The Studio of the Future | The Metaverse in Real Life,” in partnership with HTC, Aputure and Puget Systems on Friday, January 6.

The workshop will include live demos of in-camera VFX technologies in an in-depth look at how virtual production is providing new, dynamic creative capabilities for filmmakers and creators, according to the company.

CES is also well-known as a TV launchpad, although it has also suffered from prototype promises in the past (where brands show impossible and exciting technologies which never arrive on the market). Samsung, LG, Panasonic and Sony will all undoubtedly have new models to show, as well as a host of competitors. In terms of technologies, there will undoubtedly be plenty of name-dropping involving OLED, QD-OLED, Mini-LED and Quantum Dot technologies as the trend towards amped up, vibrant colour palettes and deeper blacks.

An interesting area will be 8K, which has been a central plank of manufacturer’s showcases in previous years. While that fact is unlikely to change, the EU’s new energy labelling regulations set to come into force in March 2023 effectively ban most existing 8K TVs and some 4K units too. This does raise questions around power efficiency that 8K will have to tackle - both from a regulatory perspective, but also from a consumer perspective in order to break out into the mainstream.

On the topic of panel size, there will be 100-inch-plus MicroLED models from Samsung and LG on show, the latter offering a 136-inch 4K microLED TV complete with an Alpha 9 video processor in what the company refers to as a “luxury residential display”.

Another key area for CES is the laptop and PC hardware industry, and 2023 is set for a return to form. Both Nvidia and AMD have confirmed respective launch events, which have traditionally focussed on low-power models for laptops, but may well result in larger announcements too. Indeed, with AMD CEO Dr. Lisa Su presenting the opening keynote for CES 2023 on the 4th of January, anything is possible, although early indications are that Su will focus on the HPC end of the market.

The motoring industry has always been a core element of CES, and this year it’ll be no different, with a host of EV technologies jostling for attention. There will be considerable focus on in-car entertainment though, not least via Audi’s “holoride-ready” VR and XR (extended reality) backseat capabilities. Audi claims the technology not only redefines the potential for in-car entertainment, but also reduces the risk of motion sickness.

Another fascinating VR/automotive crossover will be lidar vendor AEye Inc’s demo of next generation lidar in a smart city context. The demo will involve users at the show putting on a VR headset and walking through a point cloud to see how lidar captures information about the 3D world. A lidar-monitored crosswalk will show how the technology works in real-time to identify and track pedestrians - lidar is already incorporated in current advanced driver assistance systems (ADAS), and will likely play a key role in the increasingly sophisticated sensor packages for autonomous vehicles.

Sustainability across the board

As sustainability becomes increasingly important, CES has moved in step. Not only via exhibitors showing some of the best carbon-reduction technology around, but also in the format of CES itself. The annual CES Innovation Awards highlighted the importance of the Sustainability, Eco-design, and Smart Energy category, with Grinergy winning a gong for sustainable lithium-ion starter battery technology that is gradually phasing out lead-acid.

Other companies recognised include the Clean Water Pathfinder from ACWA Robotics, a robot that scours water infrastructure for leaks from the inside, and Schneider Electric for its Wiser Home Energy app that gives consumers new insights into their domestic energy use.

CES2023 runs from Thursday 5th Jan to Sunday 8th January, 2023 - look out for IBC365 news coverage of the main stories and announcements as they emerge.