In this recorded Microsoft Showcase Session for IBC Digital, Rainer Kellerhals, Industry Lead for Media & Entertainment EMEA at Microsoft, delivers a comprehensive look at how media companies can take advantage of disruptive technologies to transform their business. 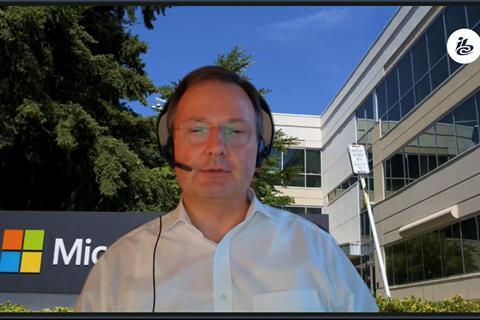 An initial look at which technologies are reshaping workflows kicks off with a look at the cloud.

“It’s simply more cost-effective to produce content to the cloud, and also to set up video streaming channels in the cloud,” says Kellerhals. “It increases agility for media companies; they can very quickly set up event channels or pop-up channels. Cloud has also helped them improve security, and it enables collaboration across sites and also with teams working from remote locations.

“The cloud has been a game-changer for media, and most media companies,” he observes. “The question no longer is whether they will adopt the cloud, but what is the smartest way of adopting the cloud and migrating their business processes to the cloud.”

Kellerhals digs deep into the transformational benefits of cloud-based workflows using real-world examples such as Digital Domain and Walt Disney Studios. He points out that media companies are using the cloud to archive their content while for post-production, facilities are running editing workstations such as Media Composer in virtual machines that are hosted in the cloud.

‘The plasticity of the cloud can help with big savings,’ Rainer Kellerhals, Microsoft

Collaboration has been greatly enabled by the cloud.

“Anyone can access this content from anywhere because you have both your content and the editing capability in the cloud,” he explains. “It’s also about using, for instance, artificial intelligence to automatically extract metadata, and also using cloud-based workflow engines to support workflows across multiple individuals or teams or even organisations. 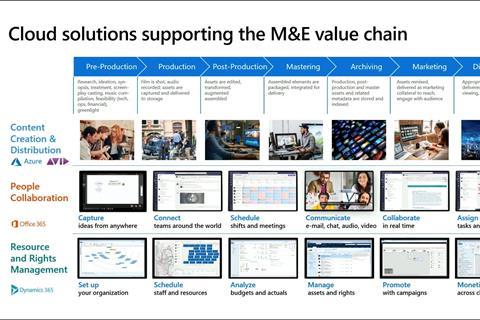 “One of the workloads that we’ve seen in the cloud for many years now is content rendering where you need a lot of compute power,” he continues. “The special effects studios and animation studios are no longer using on-prem compute power to do the rendering. It is typically being done in the cloud today, just for reasons of cost efficiency, and it’s a perfect example where the plasticity of the cloud is a big benefit.”

The cloud is not just used for content creation, but distribution and content security. “Most large playout providers are migrating workloads from on-prem infrastructures to the cloud,” he says. “The plasticity of the cloud can help with big savings.” 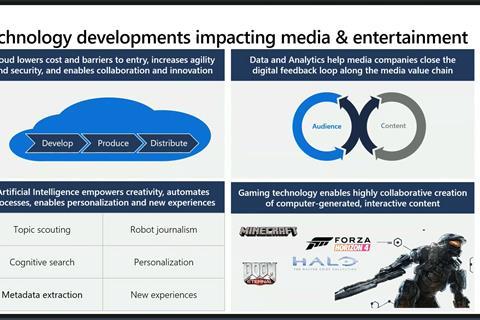 “Matching audiences and content is the core of personalisation.”

Again, Kellerhals provides examples, such as South Korean streaming TV programme and film provider Wavve. This has a platform built on containers and is using Azure services to run the environment, render content and distribute its media streams both within South Korea and globally.

Data and analytics have also become a strategic priority for media companies, to match content with what the audience is actually interested in.

“Matching audiences and content is the core of personalisation,” says Kellerhals. “This goes a long way to increase engagement and that drives subscription and advertising revenues.”

He describes the partnership Microsoft has entered into with Bertelsmann, to create an audience intelligence platform that helps the German media conglomerate capture audience insights from across its various businesses.

“We are working to capture that data, and then combine it across the different units… to inform content investment strategies and create better advertising opportunities,” he says. “This is a great example of one of the leading media companies of the world starting to close the digital feedback loop on their media businesses to drive profitability and improve the service that they are providing to both audiences and other vendors.” 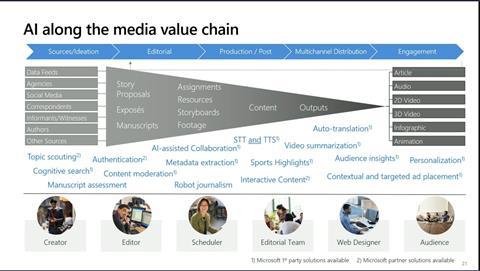 AI can empower creativity throughout the chain

Artificial intelligence is another focal point, with Kellerhals demonstrating how it can empower creativity along the entire media value chain, using cognitive search to find relevant content and automating processes such as extracting metadata from older visual content.

He dives further into this subject later in the presentation. He highlights content authentication and AI being used to identify whether any manipulations have been applied to a piece of video, as well as the use of AI to extract meaning from audiovisual content. “Topic scouting with AI recognises trending topics on the internet and allows AI to assess scripts in terms of which are likely to become blockbusters,” he explains.

“You can use artificial intelligence to make sure that there’s no inappropriate content being submitted,” he adds. “You can use artificial intelligence to assist collaboration, putting together the teams that have the expertise to address a certain developing story, and dramatically bring down the cost of synchronising content from one language to the other.”

Kellerhals cites many other examples, across the media spectrum.

The final driver Kellerhals discusses is the convergence between media, gaming and entertainment technology. 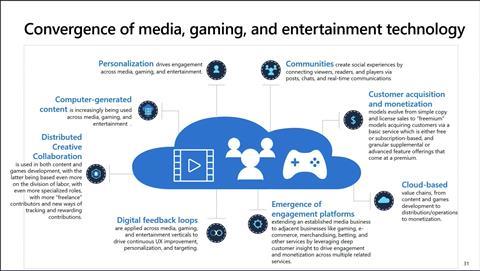 “Like gaming companies, media companies are increasingly using digital feedback loops, using distributed creative collaboration, computer-generated content, personalisation, communities, and consumer acquisition and monetisation methodologies, as well as engagement platforms to deeply engage with their with their audiences,” he says.

“We’re increasingly seeing that in film production gaming engines are starting to be used to render 2D and 3D content for both more cost-effective content creation. We’re working with sports clubs and sports leagues to create digital fan engagement platforms that extend beyond the physical experience into the digital domain.”

After a look at how LaLiga has explored this concept, Kellerhals rounds up with a summary of the benefits of working with Microsoft and an offer of future dialogue.