While rights-holding broadcasters are increasingly determined to ensure their linear sports output is available to their viewers via online channels, the sports industry is looking to OTT as a means of democratising coverage to engage fans and generate new revenue streams. The SportsPro OTT Summit, held in Madrid at the end of November, explored the latest developments in OTT and digital media as they relate to sport.

Day one kicked off with Andrew Georgiou, president of Warner Bros Discovery Sports (WBD) in Europe, providing an update on the merger between Warner Media and Discovery in April and the more recent UK joint-venture with BT Sport.

Sports industry broadcasters looking at OTT as a means of coverage

Georgiou spoke about the wealth of content the enlarged organisation now had access to and the fact that the company enjoyed significant distribution across free-to-air, cable or streaming in most of Europe. On the sporting front, he said, “We are now one of the few organisations in the world that can truly unlock the two most important sports markets in the world – the US and Europe,” adding that the BT Sport joint venture “gives us premium scale in the UK.”

Georgiou sees significant value in being able to bundle sport alongside other genres: “You need to combine more reasons for consumers to buy. You need more than one reason for consumers engage.” As WBD starts to question sport’s long-term future as a stand-alone genre he observed that, “Combining entertainment and sport is a really important asset for us.”

ELEVEN getting into DAZN

Delegates also gained some insight into the still-pending acquisition of Eleven Group by DAZN. Eleven, which grew by securing “small rights in big countries and big rights in small countries” has become the broadcaster of top football leagues in Belgium and Poland, and is a key partner for the FIFA+ global OTT service supporting the production, delivery and distribution of 40,000 live games a year from more than 90 of FIFA’s member associations.

Alessandro Tucci, Eleven Group’s Chief Operating Officer, believes that while OTT is maturing, it will not kill traditional television. “Netflix made people think that linear was no longer needed”, he said, before continuing, “that business model alone doesn’t work.” He noted that it is now widely recognised that advertising is necessary and that OTT distribution allows greater personalisation of advertising by viewer, language and format.

Throughout the three days of the event, key themes revolved around deployment and operational aspects of OTT services; the opportunities for single-sport services; monetisation options, including “FAST” channels: piracy and content security. The importance for OTT services to move beyond traditional linear television through innovations in fan engagement, user experience, personalisation and the potential of virtual and mixed reality were also discussed.

Direct-to-consumer is a key to the NBA’s efforts to challenge soccer and build new audiences outside the US according to Ralph Rivera, Managing Director, Europe/Middle East. While they have broadcast partnerships in key markets such as Spain (Movistar), the UK (Sky), Italy (Sky), Germany (DAZN) and France (BeIN Sports), timezones are a challenge as most games are in the middle of the European night. As a result, most consumption is non-live and a new mobile app, launched in September, is central to the strategy. Aiming to go beyond simply replicating the broadcast experience, the NBA is producing live games in vertical video for a mobile-first audience. However, through the use of open APIs, they are keen to enable broadcast partners to incorporate app content onto their own websites.

In a session on the migration of sport to OTT, moderator Minal Mohda, Principal Analyst at Ampere Analysis, shared research which suggested that piracy represented a lost revenue opportunity to sport of $9.8 bn a year. Of this, $3.75 billion was being missed by streaming platforms.

Russell Byrne, Head of Digital, at the English Football League (EFL) which comprises tiers 2-4 of the professional game in England, recognised that one driver of piracy is the difficulty of accessing the content legitimately. Although the EFL has a broadcast deal with Sky, only five percent of the EFL’s 1600+ matches a year are on TV.

The League manages a streaming platform that has been adopted by 60 percent of member clubs, while the rest run their own services. With fewer cameras and no previews or studio shows, coverage is less sophisticated than televised football. Streaming was originally introduced to make matches available to ex-pat supporters and has found a modest market. However, clubs are constrained in marketing the services domestically due to the broadcast blackout for the vast majority of matches that still kick-off at 3pm on Saturday afternoons: England is one of only three territories which make use of UEFA’s article 48 designed to protect physical attendances at matches.

With the current broadcast agreement due to expire at the end of the 2023/4 season, a debate is underway among league clubs as to whether the broadcast blackout is still relevant and what the net revenue opportunity of a more comprehensive streaming proposition might be.

UK pay-TV broadcaster Sky Sports is just one of many broadcasters recognising the opportunity presented by women’s sport. Gary Hughes, Director of Football, Sky Sports outlined the progress of its partnership with the Women’s Super League (WSL) and how it is leveraging England’s UEFA European Championship victory in July 2022 and said it “Wanted to position the women’s game alongside the men’s game, and treat it as a premium right.” 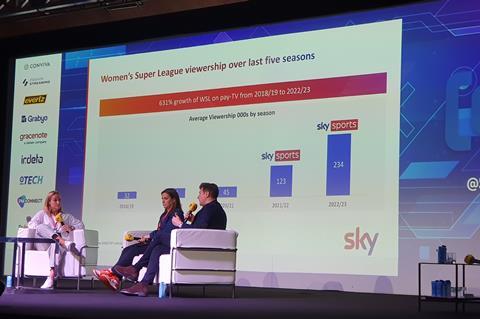 Women’s Super League (WSL) has seen a rise in popularity

Their approach has been to replicate their Premier League coverage wherever possible. While in many cases the limitations of the smaller stadia hosting most matches has prevented them from using as many cameras, now that 11 of the 12 WSL clubs are also Premier League clubs, more matches are being played in main stadia producing better product for TV.

Nia Wyn Thomas, Senior Producer for Barclays FA WSL at Sky Sports noted that production teams for WSL work across all football bringing experience of Premier League, EFL, Scottish Football and international matches to the women’s output. This commitment is being acknowledged by viewers with audiences growing over the past five seasons and increasing by 70% over the first seven weekends of the current season .

In a separate session, the Women’s Sport Trust shared data collated by Futures Sport and Entertainment that revealed audiences for women’s sport on British TV rose to 36.1 million for the period January to July 2022, up from 17.5 million in the equivalent period the year before.

Nikolaus von Doetinchem, Vice President of OTT Streaming & Media Rights, OneFootball introduced delegates to one ambitious single-sport service based in Germany. OneFootball’s current rights roster includes Bundesliga rights in Brazil, Serie A in the UK and Serie A, B and C matches in Italy. The company is also a distribution partner of Sky Deutschland for the Bundesliga in Germany.

Aiming to launch in 2023, Dyn Media sees a gap in the market for streaming sports other than soccer. CEO Andreas Heyden - and a former CEO of the Digital Sports division of the German Football League – aims to serve underserved sporting communities in Germany. Initial targets include basketball, handball and volleyball. To achieve this at a sub-€15 price point, Dyn will go direct-to-consumer “in a very robust but lightweight way.” Remote production will be key and the company has robotic cameras and AI-automated live editing on its technology roadmap.

In a sense, Dyn is positioning itself to serve German domestic sports in the way that the Olympic Channel is providing a global outlet for less well served Olympic sports. Insightful guided tours of the Olympic Channel’s Madrid headquarters were a benefit enjoyed by many OTT Summit delegates.

In a session exploring the high profile, rapidly growing “FAST” opportunity, Ana Lowry, Head of Business Development for the Samsung TV Plus connected TV eco-system revealed that the platform was currently supporting 1000 FAST channels in Europe. For a strong theme – that would be attractive to advertisers - she advised that 60-80 hours of relevant and engaging content was sufficient to launch a channel: 20-25 percent of the content would need to be refreshed each month. Content also needs to be locally relevant, including the language. Samsung is currently hosting 96 channels in Spain including one run in partnership with local broadcaster RTVE which allows viewers to watch the World Cup on Samsung mobiles.

Stakeholders in sport remain highly excited about the potential of live streaming but it is clear that for most rights owners, particularly in premium sports, OTT will complement rather than replace traditional broadcasting for the foreseeable future.