After being postponed by a year due to the Covid-19 pandemic, the 2022 Women’s Cricket World Cup is finally upon us, running until the start of April. Eight teams are taking part in the tournament, which is being played in the One Day International (ODI) format, over 31 matches, and the TV broadcast produced by the International Cricket Council covers every game.

Sunset+Vine is the production partner for the ICC on all its global world cup events, with NEP as the contracted equipment supplier. Both have been involved since 2016 when the ICC took over production and the host broadcast service component. 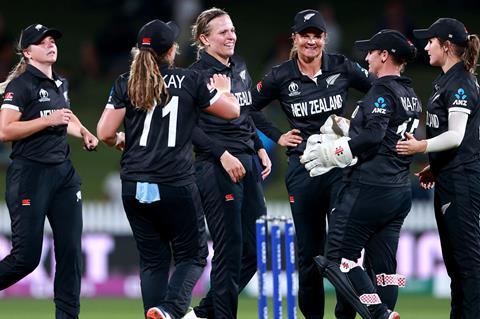 For this event, the ICC has also contracted various other facility providers, such as AE Live for the graphics, Hawk-Eye for ball tracking, and other technology firms such as aerial videography specialists.

Transmission, delivery and distribution is managed and provided by the ICC and Star India, the global rights holder, which syndicates live coverage rights to various global partners and platforms.

“This is the biggest spec we’ve ever had for a women’s cricket event,” Huw Bevan, Sunset+Vine

NEP has deployed more than 50 technical personnel from around the globe to facilitate the large-scale production, including project managers, technical managers, senior engineers, assistant engineers and riggers. People have flown from Europe, Germany, Singapore, Malaysia and India to support this project.

“As part of ICCTV, we were in New Zealand a year prior working with local organising committees to ensure all stadiums are ready from a broadcast perspective, and all necessary infrastructure is in place,” says Saeed Izadi, President, NEP Singapore and India. “Quality production is what ICCTV is committed to as a team, and months of planning and preparation from all stakeholders has gone into putting the best foot forward to enhance the audience experience at home.” 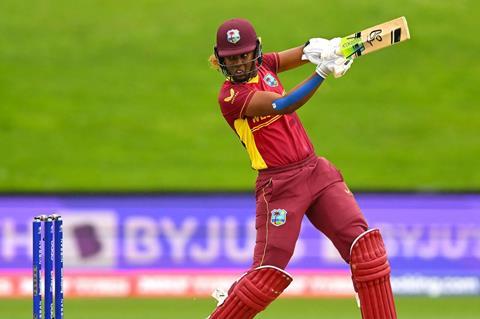 “[Sunset+Vine] provides the crew, the editorial and the creative for the ICC production,” says Huw Bevan, Head of Cricket and Executive Producer at Sunset+Vine. “We produce the standard world feed as a host broadcast service, which Star India takes as a bedrock to customise for its own requirements.”

There will be 24 cameras covering every game, with three production crews and four production ‘kits’ either made up of OB trucks or fly kits, moving between the venues in New Zealand.

In total, over 75 UHD cameras (including super slo-mo, RF and speciality cams), 25 EVS servers and other cutting-edge equipment has been deployed to enhance the production. 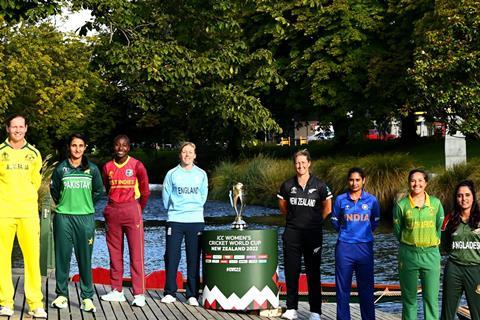 “This is the biggest spec we’ve ever had for a women’s cricket event,” says Bevan. “We will have drones and what we call a buggy camera at every game, and the rest will be essentially a mix of fixed and unmanned cameras, in addition to the Haw-Eye cameras for ball tracking that we have with each production crew.”

According to Bevan, Sunset+Vine has around 300 crew in New Zealand for the event, not including commentators. “We have some of the best commentators, male and female, working on the event,” he says. “Cricket is one of those sports that is very labour-intensive compared to other sports productions. Typically, you might have two or three commentators on a football or rugby match; whereas we would generally be working with six commentators per match. Numbers will increase because of the number of matches and venues.”

There are a lot of logistics involved and the ongoing pandemic has provided challenges. Foreseeing the logistical complexity, NEP had to mobilise more than 40 tons of equipment four months before the event. There have also been challenges from a crewing perspective, whether it be commentary or production, with an ongoing calendar of sporting events taking place at the same time as this rescheduled Women’s Cricket World Cup.

“I think every tournament, every country, every venue, throws up its unique challenges,” says Bevan. “The pandemic obviously caused massive challenges just in terms of moving people into New Zealand or within the country. There have been many hurdles to cross as far as that’s concerned. But it’s also been done in the context of a Winter Olympics in Beijing, which was sucking up a lot of both the technology broadcast equipment and crew. That’s notwithstanding the ongoing men’s international cricket series that are taking place. While this is a major event, the men’s game pretty much comes to a standstill when the men’s ICC World Cup is on. So that’s a difference, which puts an extra challenge on things from a logistics perspective. If you throw a pandemic on top, it’s been quite hard work putting this together.”

Although there’s a growing trend in sports broadcasting towards remote production, ICC broadcasts are generally produced using an on-site model. 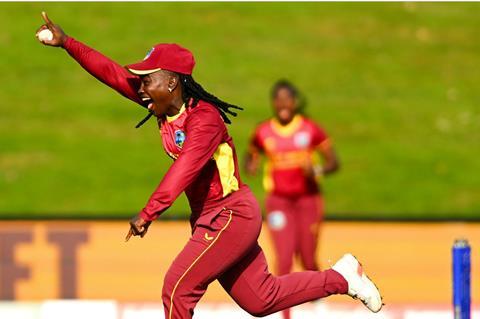 “The Women’s World Cup in New Zealand is no different to any other ICC event,” says Bevan. “There is no central IBC per se for cricket events. In essence, we produce the match feed at each venue. It goes up to the satellite or is delivered by fibre, and is then delivered to the world as a standard world feed with unilateral opportunities before and after. The kind of setup you would ordinarily see on a multi-team, multi-venue world event such as the Rugby World Cup, with everybody plugging into the back of the truck, really does not happen in cricket, and there’s not been a requirement for it.”

“We’ve learned how to customise it,” he explains. “We dovetail the world feed, catering for each international country, whether it be through commentary or by way of various creative editorial nuances for each country and market as best we can.”

“Quality production is what ICCTV is committed to as a team, and months of planning and preparation from all stakeholders has gone into putting the best foot forward to enhance the audience experience at home,” Saeed Izadi, NEP Singapore and India

Sunset+Vine’s world feed service for the ICC has a twofold nature. “There is a standard live broadcast service, a presented model, which starts half an hour before the match with a pre-show production,” explains Bevan. “We produce all the match coverage and we do a mid-innings show, which is presented from the venue. We do a short wrap-up at the end of the game including formal interviews and other presentation aspects, such as player of the match awards that need to go on, as well as the captains’ interviews, and then we do a very short summary covering the context of the matches in the tournament.”

Over and above this, Sunset+Vine provides a content service for any broadcasters that want to do their own programming. “We produce a variety of team features, such as previews, player profiles, team profiles, and they are made available to the broadcasters beforehand on a cloud-based media management system, and we also play them out for the rights holders. We provide pre-match interviews before we go on air and pre-recordings of things like the pitch report, all those kinds of formalities. We essentially give them a lot of the [programme components] as part of the service beforehand.” 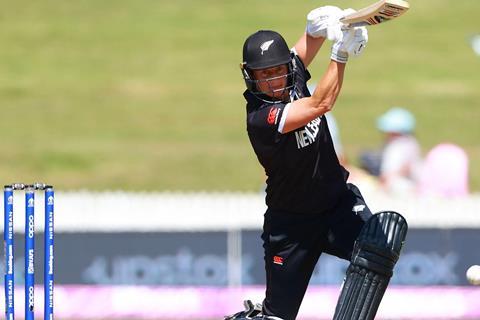 There’s also a remit to deliver the official highlights of every match in a one-hour package to all the licensees, produced by a team based in Singapore. “They get access to the satellite and will produce each match,” says Bevan. “We’ve done it on-site before and offsite before, but we’re choosing to do it for this event from Singapore just because it was simple and more cost-effective.”

Sunset+Vine also has crews on-site to make non-live features. “This is at the heart of our content service,” says Bevan. “They have a brief list of deliverables ahead of every match - it’s a mix of interviews, features, profiles and promotional material that needs to be produced.

“There are designated digital teams doing supplementary content for the digital licensees, such as behind the scenes footage for social media. We also produce an official film at the end of the event, so we have a small team with a feature doc approach, looking back at the key stories that came out of the tournament with a more historical mindset.” 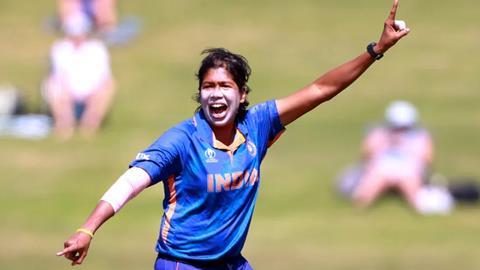 Jhulan Goswami of India celebrates after Suzie Bates of New Zealand was run out by Pooja Vastrakar of India during the 2022 ICC Women’s Cricket World Cup match between New Zealand and India at Seddon Park on March 10, 2022 in Hamilton, New Zealand.

Unilateral interviews for broadcasters and other requests are also accommodated in the lead-in, says Bevan, who adds that the same thing happens at the end of a match: “Post-match interviews, stand-ups, whatever they want to do afterwards, is made available to them as a bookable service.

“We also offer quite a few freebie services; at the end of a feed, we’ll play out multi-angle replays – ‘the melt’ as we call it – of all the wickets that might have fallen, the battings from various innings, the highlights and so on. We’d like to think we’re providing a good service for the broadcasters.”