The 5G gang: The coming of 5G Vista

Delivering richer fan experiences while more effectively using network resources are just two of the benefits of 5G Vista, but its potential goes way beyond this, as the team behind the project discussed at a recent demo day.

The team behind 5G Vista started out as the DTG, O2 Telefonica, Digital Catapult, Global Wireless Solutions and Rohde & Schwarz. To conclude phase two, the proving of a technology system based on 3GPP and FeMBMS as standards, Ateme (encoding software), Imaginary Pictures (production expertise), Ori (multi-access edge computing) and 5GIC at the University of Surrey (content security) were added to perfect the impetus behind a 5G multicast system aimed initially at sports and music fans. 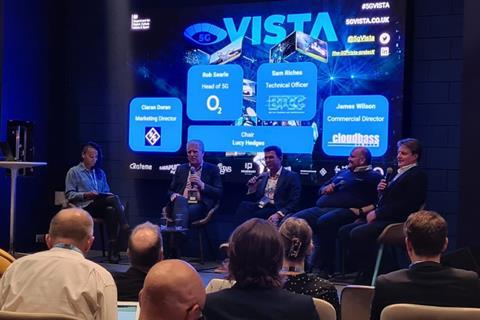 Alex Buchan, DTG Strategic Technologist, opened up beta app demo day by saying: “Vista brings together skills from across the media ecosystem. We are not just looking at the technology, we are looking at the routes to market, what is going to drive the future ecosystem, and what people are willing to pay for it.

“We are looking at a broadcast multicast concept, the advantage of which is that the quality is maintained no matter how many people want to join into that feed. It is cost effective, and it can help us overcome the capacity problem we’ve now got in stadiums.”

The more efficient use of network resources is the technical driver, but what is the driver for the end user?

“Over three in every four fans at live sports and music events use their mobiles to engage at some level, so the mobile is part of the experience.

”However, providing enough network capacity at venues just to support the basics, let alone provide premium services over the top, is a commercial challenge,” Buchan says.

“However, if you had a broadcast solution of two base stations covering the whole stadium with 700MHz of spectrum, you can easily see the cost is reasonable.”

“Golf is perfect for Vista because it is a distributed event and you cannot see what is happening on most of the holes. Cricket, rugby and football can offer synchronised commentator options, advertising and sales apps, and merchandising,” Buchan says.

“We are looking at multi-event things like the Olympics and music festivals with lots of stages, and at fans’ sites.” 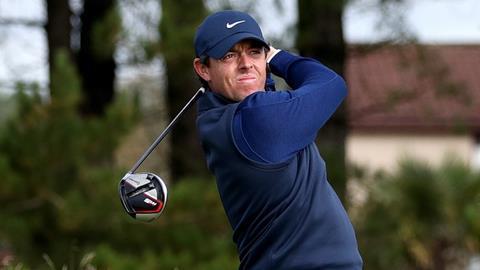 Golf: Described as ’perfect for Vista’

Vista has identified four main stakeholders that have to come together to develop commercial services.

David Owens, head of technical trials with Telefonica, explains that the most important element is that Vista is internationally standardised as part of the 3GPP standards that govern how networks like O2 are built.

“It is great to have a new architecture that has to be integrated into a mobile network. The simplest way you could do that is to create an overlay. If you are a little more ambitious you can deeply integrate it into your network and offer 5G multicast broadcast services as part of the 5G network,” he says.

“We are not talking on behalf of broadcasters, but this technology will enable BT with its Sports App and Sky with Sky Go to integrate it. We are not advocating there has to be one app, one solution,” he adds. “Now, not only do you get the event experience and the home experience, you can bring them together.” 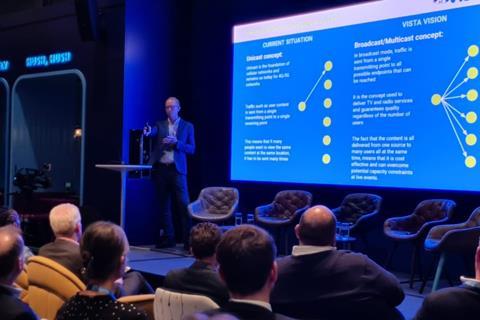 O2 is the technical lead for the project and it provided the spectrum. Its lab team also developed a beta version of the application to indicate what the user experience will be like when the project goes fully glass to glass.

At the demo Imaginary Pictures confirmed that after testing a number of ways of getting content into the system, you can get video in the same way you would with any other set up. The real innovation had been getting the MEC from Ori, and having a containerised version of Ateme’s encoding software in the cloud.

Paul Ramsden of Rohde & Schwarz detailed the broadcast network. “We are taking the containerised multicast streams from Ateme, and we can take in various data formats as well. You can also have some stored streams for infotainment, plus service and emergency announcements,” Ramsden explains.

It is based on the Rohde & Schwarz BSCC which contains three elements – the multicast services control, the multicast gateway and the multicast co-ordination entity. One key area is the SDL software defined exciter, which shifts content from the data network world to standard UHF TV transmitter mode. For the test demo, Rohde & Schwarz used a 5MHz bandwidth for the required data streams. The spectrum sits at the top part of Band 5 UHF.

Kostas Katsaros, Senior 5G Technologist at the company, says: “This is having the FeMBMS BSCC control centre on one site and a transmitter in our remote site. One of the use cases that was described was that you have the in-venue experience but also something that can be done and end up in different venues, for which you need a second transmitter.”

“Our return from this is seeing the commercial benefits and the fan engagement,” he says. “From the promoter side and the aspect of fan engagement, it is all about getting people to the venues and making them feel they are getting value for money and massively enjoying their experience.”

Roll in a trailer at venues

James Wilson, Commercial Director of Cloud Bass, adds: “Vista very much excited us because we see it as a great app to effectively level up the terrific job that broadcasters have done. We can enhance the spectator experience for a multitude of events.

“The two antennas thing means pretty much being able to roll in a trailer at venues that only have one large-scale public event per year. It means that massive infrastructure does not have to be put in. There can be a limited number of moving units that go along to live venues and work with the broadcaster hand-in-hand.”

“There is excitement in the air on this one. From the technical point of view it ticks that box, and from a consumer perspective it just catapults the experience you can have in a live event,” Rob Searle, O2

Rob Searle, Head of 5G with O2, says: “There is excitement in the air on this one. From the technical point of view it ticks that box, and from a consumer perspective it just catapults the experience you can have in a live event. It also ticks the consumer experience box.

“We are still at proof-of-concept stage, but it is not just a connectivity thing, it is a full experience, a sweet spot where everybody is equally excited. There is a green angle to this for O2 if we can deliver capacity more efficiently. We have a carbon-neutral pledge and this takes us a long way to meeting that.”

Searle suggested 5G Vista could have an impact in wider society too, such as in health and safety settings. Wilson picked up on this: “This could evolve into micro transmitters, something that is very low power you can put it into trains and planes. Instead of having to have that entertainment system built into the seat in front of you, you can be on fly mode and still watch a selection of channels.”

Ciaran Doran, Director of Marketing with Rohde & Schwarz, focused on e-learning in remote locations, and national disasters. “Although the phone networks got wiped out when the floods hit Germany [in July], there were the HP/HT transmitters sitting on mountains for giving wide area network coverage. Being able to hit mobile devices and even screens in pubs and bars without the need for a SIM, it becomes a public information network, an emergency system,” he explains. “We are seeing the beginnings of a convergence between broadcast network operation and mobile network operation for the very first time.”

Seale says: “We may get half way through this and think ‘oh my goodness, it lends itself so much better to this use case’, and we could go in a different direction, but we have a really clear idea of what we want to get out of it, which is multiscreen experience at an event.”

Meanwhile, Digital Catapult is working with consumer inputs from GWS in its building of business cases and models for different use cases that will have to light dollar signs in business eyes.

GWS CEO Dr Paul Carter comments: “The majority of consumers at live events typically use their smartphones (76% music and 77% sports), with photography, messaging, filming and voice calls being the most used functions. Over a third of these fans said they would be interested in using an app based on Vista technology.

“We are working with business leaders to test a variety of potential commercial models for this technology. Music and sports fans attend live events (96% and 95%), and nearly 90% of both groups buy something at the event.”

Buchan adds: “We are engaged with 5G-MAG. We want to get that [end of project] report out in March to as wide an audience as possible and use it to push the standards people, the chipset people and the handset vendors. People are waiting for this technology and are very keen on using it.”